Writer John Logan and director Alex Timbers’ Tony-winning, Broadway-charming Moulin Rouge! The Musical is ‘spectacular, spectacular’ – and worth the wait

6 CW readers are interested
Moulin Rouge! The Musical, Piccadilly Theatre review 5 Moulin Rouge! The Musical, Piccadilly Theatre review Lucy Brooks
Writer John Logan and director Alex Timbers’ Tony-winning, Broadway-charming Moulin Rouge! The Musical has endured more trials and tribulations to make it onto stage than those of its characters in the play-within-a-play, Bohemian Rhapsody. While ‘consumption’ (tuberculosis) was contagious and deadly, it had nothing on the transmissibility of Covid-19’s Omicron variant, cases of which plunged the Moulin Rouge! company into isolation over the all-important Christmas period, postponing the press night twice. Happily, the West End transfer is more than worth the wait. Moulin Rouge! is ‘spectacular, spectacular’, a gloriously garish and glittery romp through Paris’s lost bohemian scene.

Based on Baz Luhrmann’s 2001 jukebox musical movie, the stage show is narrated by a young composer, Christian (breakthrough star Jamie Bogyo – more on him later) who, like wide-eyed, young Americans before and after him, has come to Europe in search of truth, beauty, freedom and love, but not before paying a visit to a local cabaret club, in this case, the Moulin Rouge. 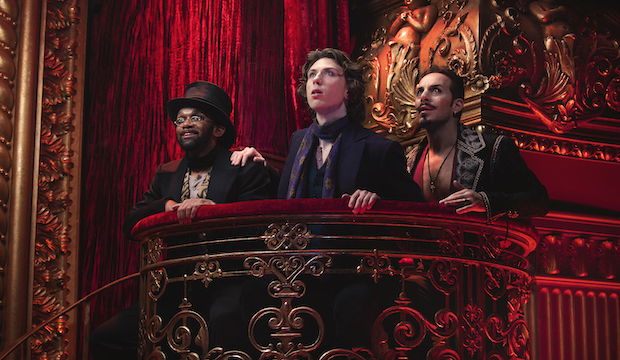 With the help of fellow bohemians Toulouse-Lautrec (an enchanting, vivacious Jason Pennycooke) and Santiago (a smouldering Elia Lo Tauro), he secures a meeting with the club’s crown jewel, the courtesan Satine (a dignified, alluring Liisi LaFontaine), and the two fall in love. But not so fast: Satine has confused Christian for the Duke (wannabe 'hot ride', Simon Bailey), who’s paid good money to have his way with her. The four creatives, with the help of the club’s emcee Harold Zidler (a slightly too gentle Clive Carter), convince the Duke they’re working together on a new show, the plot of which mirrors the unfolding love triangle between Christian, the Duke and Satine. 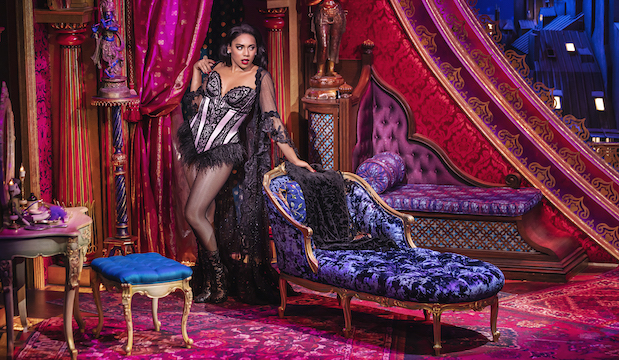 Refreshing the jukebox of Luhrmann’s movie is a medley of pop mashups arranged by Justin Levine, dating the show's development in the mid 2010s. Versions of Sia’s Chandelier, Katy Perry’s Firework (replacing the movie's fragile number One Day I'll Fly Away) and Lady Gaga's Bad Romance are all big-energy highlights, bolstered by the show's strong ensemble. Hits are fused seamlessly throughout, such as when Gentlemen Prefer Blondes’ number Diamonds Are a Girl’s Best Friend bleeds into Beyoncé’s Single Ladies via Madonna’s Material Girl. At each turn, Levine’s chosen tunes not only capture but enhance the sentiment playing out on stage. Toulouse-Lautrec and Santiago describe the hedonistic underworld of the city’s Montmartre district through Lorde’s 2013 hit Royals. They sing of a ‘torn up town [with] no postcode envy’, where residents ‘crave a different kind of buzz’ – and the song is a perfect marriage for the moment. 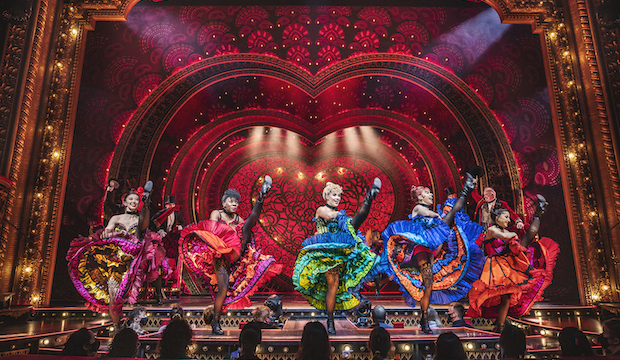 That Moulin Rouge! is such a coup is largely thanks to its designers. Derek McLane’s set, Catherine Zuber’s costumes and Justin Townsend’s lighting rightly all won Tony awards. Together, they transform the stage into an intoxicating riot of multicoloured ruffles, fishnets, bling and endless velvet. It’s flamboyant, OTT and, though conceived before the pandemic, the celebratory outburst we’ve all been craving after two demure years.

McLane’s set, in particular, is a masterpiece. Framing the stage and mimicking the design of Luhrmann’s movie are kaleidoscopic red hearts, while bursting from its balconies are models of the club’s windmill and a life-sized elephant. Playing cleverly with proportions, McLane offers us a bird's-eye view of the city before plunging us down to the streets beneath, where the action is dwarfed by tall stone buildings, lit by Townsend’s warm glowing windows. 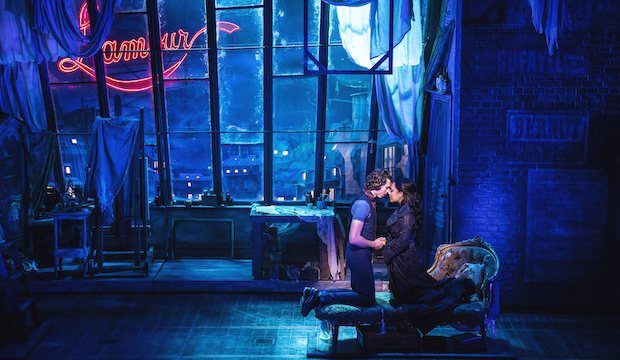 While staging, score and script are all replicas of the ongoing Broadway production, which has birthed another copy for Australia, original to the West End show is its cast. Bogyo is the standout performer here – and what a professional debut it is for the RADA graduate! He captures all of Christian’s hopeful, love-sick passion, while his singing voice is note-perfect and caramel-smooth. It’s no wonder he got the gig and exciting to wonder what he’ll do next.

LaFontaine presents us with a less delicate and feline Satine than Kidman's. She's very much a heroine for the 2020s: gutsy, headstrong and fervent, determined to do her bit to save the club from closure.

Is Moulin Rouge! The Musical delightful enough to run for 50 years? It’s unlikely (only The Mousetrap has reached that milestone to date), but will it make its audience stop and cheer? Oh yes. 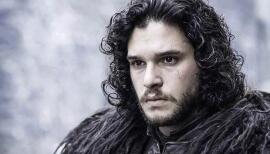 Cabaret, The Kit Kat Club at the Playhouse Theatre review
Sign up to CW’s newsletter
By entering my email I agree to the CultureWhisper Privacy Policy (we won`t share data & you can unsubscribe anytime).