Kathleen Marshall’s show-stopping revival of Anything Goes glides back onto the Barbican Theatre stage, following a sell-out run in 2021

Read our review of the 2021 production below.

Let’s get one thing straight, musicals like Anything Goes have a self-selecting audience. If toe-tapping sailors, shimmying cabaret stars and happy-go-lucky songs make you grimace, stroll on by – there’s plenty more to see on the London stage this summer. But, if a spectacular revival of pre-Golden Age musical sounds like the medicinal escapism you’re craving after the drudgery of the last 18 months, then take your seats, because, boy, does director-cum-choreographer Kathleen Marshall’s revival deliver.

First seen on Broadway in 1934, Anything Goes premiered at a time when audience members lucky enough to afford a trip to the theatre were in desperate need of some light relief from the grim realities of the Great Depression.

Featuring music and lyrics by Cole Porter and a book by Guy Bolton and PG Wodehouse, Anything Goes is set aboard an ocean liner crossing the Atlantic from New York to London. While the celebrity turn-out for such a voyage is woefully scant, potential for tomfoolery and romance are rife: on board is young Wall Street broker Billy Crocker, a stowaway hoping to persuade the debutante Hope Harcourt to break off her engagement to Lord Evelyn Oakley and marry him instead. Also sailing are Billy’s allies and fellow mischief-makers, the nightclub singer Reno Sweeney and low-level criminal 'Moonface' Martin. 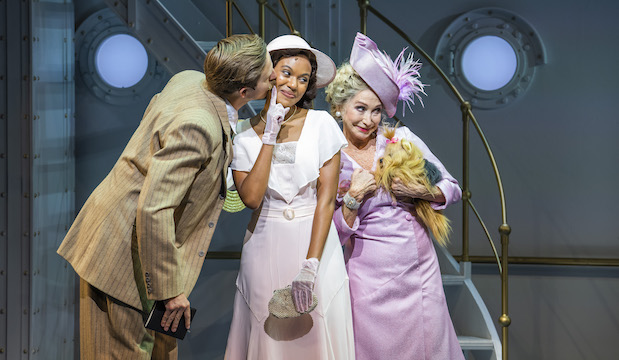 Arriving in London at a time when theatregoers are reemerging shakily from the crush of the pandemic, Marshall’s 2011 Tony award-winning revival (featuring a new book by Timothy Crouse and John Weidman) fulfils a similar purpose to the original production.

Like recent West End revivals of Follies and 42nd Street, Marshall’s Anything Goes preserves rather than renovates the show. It’s a musical with a capital M, one that issues its audience with a passport to a glitzy, polished fantasy of a bygone era. 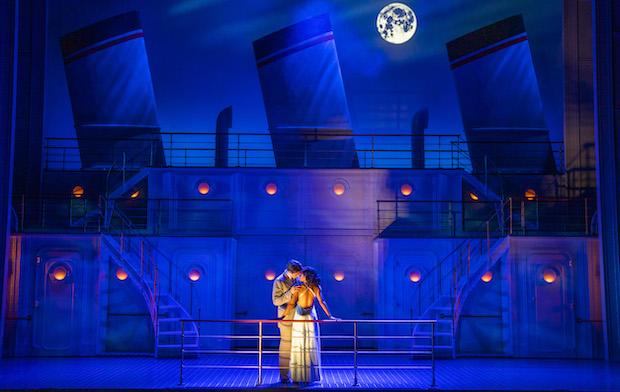 The action takes place on Derek McLane’s wholly naturalistic, wow-factor set, the centrepiece of which is an elegant, three-storey cruise liner stretching the length of the Barbican stage. Other dwellings – a functioning cocktail bar, fully furnished cabins and an engine room-cum-cell – are wheeled on and off with slick ease. Hugh Vanstone’s understated lighting cleverly reflects time moving forward as the ship creeps closer to London; vivid blue hues turn to starry nights and a full moon shrinks to a crescent as the story unfolds.

Samuel Edwards (Les Misérables, Wicked) and Nicole-Lily Baisden (The Book of Mormon, Let's Face the Music) deliver faithful performances as the leads Billy and Hope. But eclipsing all else is Sutton Foster, who reprises her Broadway role as Reno Sweeney 10 years after winning the Leading Actress in a Musical Tony for her performance. Balancing gumption and fire with a nonchalant, saucy sweetness, Foster leads the cast through note-perfect renditions of I Get a Kick Out of You, You’re the Top and the titular Anything Goes, swapping sailor suits for glittery ballgowns and risqué leotards as they go. 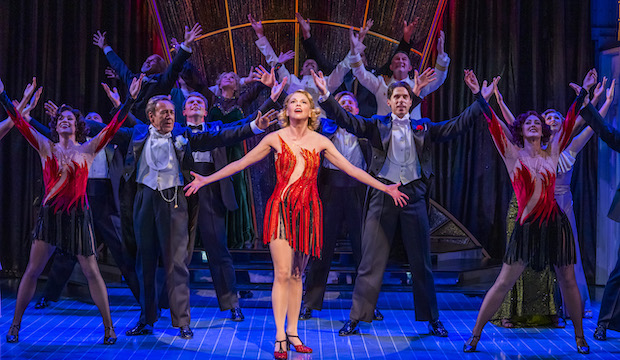 Together with Tony, Olivier and Bafta award-winner Robert Lindsay, aka 'Moonface' Martin, the pair steal the physical spotlight and the night, singing the bawdy number ‘Friendship’ to roars of applause and laughter from the audience.

‘This is the best time I’ve had all year,’ we overheard the woman sitting next to us say to her companion. Judging by the standing ovations (yes plural), it was for others, too. Oozing with gloss, glamour, simple humour and old-fashioned sauciness, Anything Goes is a chance to leap off the troubled decks of S.S. Reality for an altogether more uplifting journey.

Tickets to Anything Goes at the Barbican Theatre are now on sale. Click here to book. 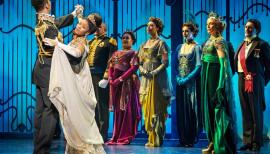