In the ensuing tragicomedy ‘Master Harold’…and the boys director Roy Alexander Weise (Nine Night) lets the action do the work, proving less is more with a few simple yet highly effective directorial choices. Using the Lyttleton Theatre was wise, making laughs more intimate and insults more shocking than they would be in the cavernous Olivier upstairs.

Willie and Sam are practising their steps for the great ballroom dancing national finals in two weeks’ time. From the beginning, Animashaun and Msamati forge a superb camaraderie, mercilessly ribbing each other while practising their two-step and foxtrot. Animashaun is a master of comic timing when seriously pacing out stiff steps, but his concentration has tragic roots - ballroom dancing was the one brief times many Africans could escape daily injustices. Of course it’s serious. Fugard’s writing often does this, comedy morphing to tragedy in a few terse lines of backstory. 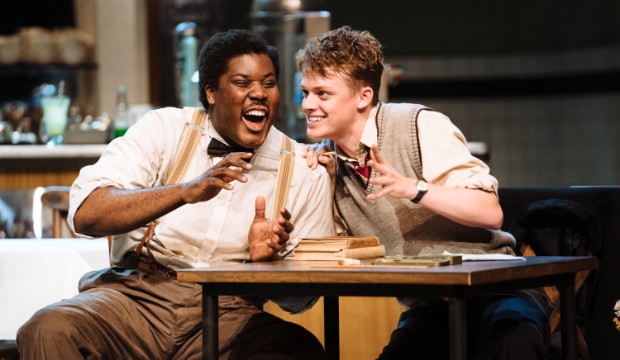 More escapism comes through horsing around with Harold, or ‘Hally’ (Anson Boon), the teenage son of their employer just back from school, whom they adopted long ago as a quasi-son. The relationship between Boon, Animashaun and Msamati is beautifully layered, endearing little details conveying an old and firm friendship through in-jokes, gestures, mimes or mock salutes. The more joyous this relationship, the more heartbreaking it is to see how easily it can be destroyed by the racism of apartheid. Things soon become stormy.

Boon was a weak link in this production. To British viewers his Cape Town accent will seem convincing, but it did not impress the South African woman who was sitting behind us on press night. Boon’s struggles with his brogue may have made his performance suffer, coming across as slightly mechanical, unable to compete with Animashaun’s gentle giant and Msamati’s dignified guru. This may have been a decision by Weise to show the emotional inhibition of South African whites, but comes across as poor acting.

But anything can be redeemed by the raw power of Fugard’s work. ‘Master Harold’…and the boys plays like a Greek tragedy, with the same tight structure as Arthur Miller or Eugene O’Neill, based on Fugard’s own tragic relationship with the two waiters he grew up with in his mother’s teashop. Although the symbolism can feel a little over-egged, this is a deeply moving confession.