Caryl Churchill may well be a psychic. Her plays have an uncanny ability to feel both prescient and timeless, pre-empting major world events or providing social commentary on the current political landscape – regardless of how long ago they were written. Such is the case with Far Away, Churchill’s 2000 play which has been revived for a production at the Donmar Warehouse in the hands of director Lyndsey Turner (who previously directed Churchill’s Top Girls and Light Shining in Buckinghamshire at the National Theatre).

When the play first premiered at the Royal Court 20 years ago, its war-torn setting could have alluded to the bubbling tensions between the superpowers of the West and the Middle East, which would eventually boil over into the Iraq war three years later. But in 2020, its frictious landscape seems to speak of the refugee crisis, people-smuggling, zero-hours contracts and Brexit-inspired suspicion of foreigners. 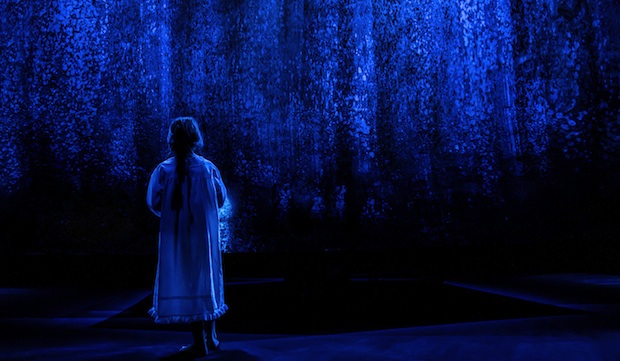 Far Away at the Donmar Warehouse. Photo: Johan Persson

The play opens with a young girl, Joan (Sophia Ally), who, after being sent by her city-dwelling parents to live with her aunt Harper (Jessica Hynes) and uncle in the countryside, discovers a dark secret in the middle of the night.

The drama flashes forward several years and we find a grown-up Joan (Aisling Loftus) working in a hat factory with Todd (Simon Manyonda). In Churchill’s trademark style, we’re presented with snippets of abstract conversations between the pair which, in Turner's production, are broken up with blackouts. This workplace chat seems harmless on the surface until the interjection of an entirely different montage: a parade of terrified prisoners wearing the hats produced by Joan and Todd’s hat factory – a harrowing, anger-inducing reminder of the world-at-war setting of the play. 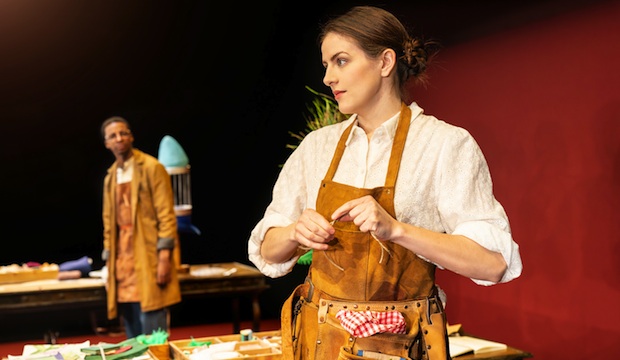 Time jumps forward again for the third and final act, and things take a turn for the surreal as Joan, Todd and Harper discuss the allegiances of the ongoing war, in which deer, cats, crocodiles and other animals have taken sides with different countries – and even the weather has been recruited to help the Japanese.

Far Away is chilling and darkly funny in equal measure, the humour offsetting the bleak, stark reality of Churchill’s dystopian world. In Turner’s production, the drama unfolds on an impressive set designed by Lizzie Clachan. Blood-red walls and flooring conjure an ominous tone for the first act, while a large metal block represents the confines of those living through a war, as well as the truck that transports the prisoners. But the set design reaches its aesthetic climax in the hat-parade scene, where a sizeable chorus of prisoners appears framed against a corrugated-iron backdrop of what is, momentarily, a two-storey structure. Meanwhile, whirrs of sound by Christopher Shutt, coupled with caught-in-the-act flashes of light by Peter Mumford, drum up a sense of foreboding. 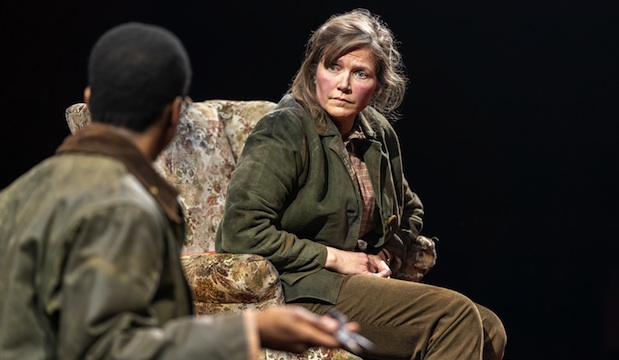 At just 45 minutes, Far Away is cleverly short. Its sharp, sudden conclusion feels more like a pause for breath than a final resolve and leaves us with more questions than answers. Later, you’ll find yourself mentally replaying some of those abstract conversations and attempting to match them with corresponding real-world events. Such is the genius of Churchill, whose play presents a dystopian world that's just as relevant today as it was 20 years ago – and if anything, feels a little less far away.