Tammy Faye: A New Musical, Almeida Theatre review 3 Tammy Faye: A New Musical, Almeida Theatre review Holly CW
‘Faith is a power greater than oil and gas combined,’ one character wryly observes in Tammy Faye, the much-hyped musical uniting pop-rock legend Sir Elton John with the crème de la crème of British theatre. Once upon a time, circa the 1970s and 80s, there was money to be made as a preacher-cum-presenter of the ‘electric church’ too, a movement in North America that launched TV networks in devotion to televangelism. Among its greatest profiteers were Jim and Tammy Bakker, whose network PTL (Praise the Lord, or People That Love) saw the couple from the Bible Belt and their gaggle of Christian puppets rise to stardom then fall from grace in a fit of controversies of Jim's creation.

The great contemporary playwright James Graham (Ink, Quiz, Best of Enemies) has made this story the subject of his latest play, working with an impressive roll call of collaborators including designer Bunny Christie (Company, After Life) and the Scissor Sisters’ lead singer Jake Shears, whose lyrics supplement John's score. The result is a camp, pastel-coloured, whirlwind recap of the foremost moments in the couple’s trajectory, in which the songs and performances trump a script that overeggs the comedy of the saga at the expense of compelling us with its drama. 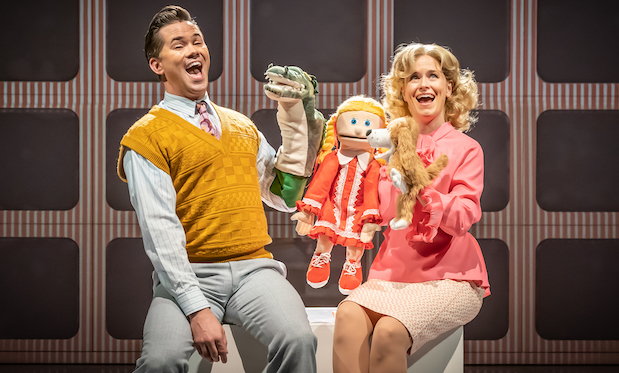 On Christie’s adaptable set, where a grid of TV screens doubles up as peekaboo windows, we see the couple grow a devoted following, reaching through the television screen and into the homes and hearts of the country’s Christians. Graham’s script spends ample time documenting PTL's expanding empire, which peaked with the launch of Christian theme park Heritage USA, before touching – too lightly – on Jim Bakker’s darker chapters, including his alleged trafficking and rape of devout follower Jessica Hahn, and the fraud for which he was eventually put behind bars.

Here, Graham's plot pivots to make Tammy the focus: she divorced Jim and became an unlikely icon within the gay community after her televised interview with, and support for, HIV-positive pastor Steve Pieters. Credit must go to costume designer Katrina Lindsay, who gradually ages Tammy over five decades through a series of impressive wigs. 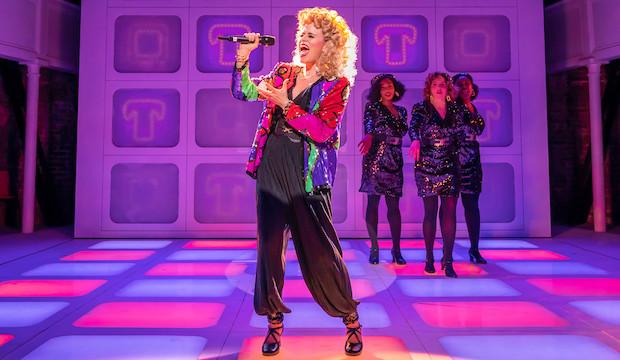 Katie Brayben (Beautiful, Girl From The North Country) is a ball of infectious energy as the titular preacher, becoming more sassy and likeable as the story progresses. Andrew Rannells (The Book of Mormon, HBO’s Girls) as Jim is the opposite, his inner wolf gradually emerging from his sheep’s clothing – all cuddly jumpers and slicked-back hair. The pair of them have musical theatre pedigree and here they master characterisation while bringing incredible vocals to the production.

Equally brilliant is Zubin Varla as the couple’s antagonist Jerry Falwell, and never more so than when singing his big baddie number, which John and Shears have seasoned with Disney-style ‘soon this empire will be mine’ energy. 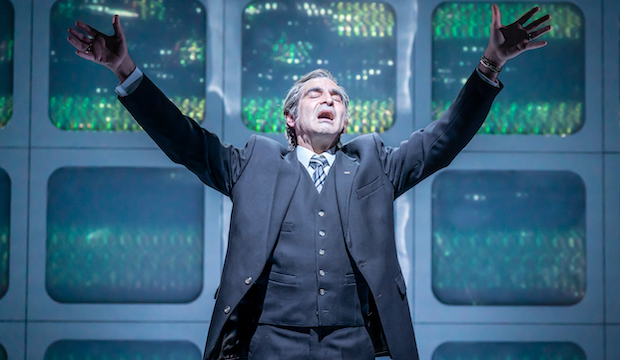 John and Shears’ songs blend hints of hymns with pop, ballads and a little rock ‘n’ roll. The slower, emotional numbers are generally better, with Tammy’s final victory song If You Came to See Me Cry the musical highlight.

To those familiar with the playwright’s work, Tammy Faye will run like a James Graham play with songs. He ticks off the noteworthy moments in this story, fabricating interactions for our benefit and hamming up the humour. But coupled with Lynne Page’s happy-clappy choreography, which in one wince-worthy scene sees the cast dance a clunky conga, this show feels like a liberal elite-style belittling of the Bakkers' once seriously influential and corrupt platform, that masked its misdeeds under the friendly face of Christianity.