Visionary director Gadi Roll is set to bring his trademark 'dynamic imagery and haunting sound-scapes' to Schiller’s magnificent tale of intrigue and incest, passion and politics set in a sixteenth-century Spanish Court.

Don Carlos, heir to the tyrannical King Philip of Spain, is in love with his stepmother Elizabeth de Vallois. Don Carlos' childhood friend the Marquis de Posa pledges to help Carlos in his quest for love if the prince in turn will help him secure the civic freedom of the people of Flanders. Combat, betrayal, incest, treason and power struggles in a duplicitous court ensue.

Written in Hamburg just two years before the chilling and bloody French revolution, Schiller's masterpiece explores themes of justice and equality, freedom of speech, religious bigotry and state persecution, which are as relevant today as ever. 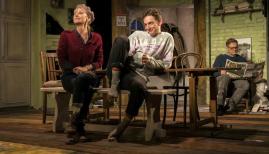