A Singaporean skin-whitening company goes viral for the wrong reason in White Pearl, a new comedy on at the Royal Court

The script for the 90-minute play caught the attention of Royal Court artistic director Vicky Featherstone. Impressed with 25-year-old King’s writing, Featherstone commissioned White Pearl for the Jerwood Theatre Downstairs at the Royal Court, where it’s currently enjoying its debut under the direction of Nana Dakin. King has previously worked with Punchdrunk, PlayCo and Roundabout Theatre, but the production of White Pearl marks her international playwriting debut. 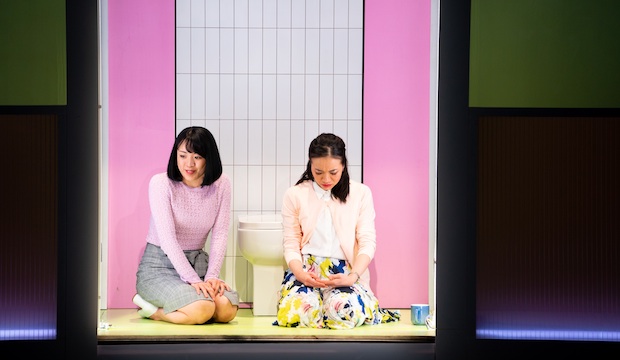 White Pearl is set in present-day Singapore, in the polished offices of Clearday, a start-up cosmetics brand. When a draft of a video advert for the company’s skin whitening product is leaked, it quickly goes viral for all the wrong reasons: it’s meant to be funny but it’s extremely racist.

YouTube views are climbing through the thousands, media outlets are calling for statements and the mob of angry online commentators is growing. In short, it's an international PR nightmare not dissimilar to the real-life 2017 Dove campaign where the depiction of a black woman removing her top to reveal a white woman sparked fury. Only the fictional advert in White Pearl is so ridiculously offensive it’s hard to imagine how the concept even got commissioned in 2019.

While the play’s context – a racist advert being called out by social media's mass, anonymous jury – plants it firmly in our present-day PC times, White Pearl’s ethical concerns are joined by a second plot thread, shifting the play into thriller-esque 'whodunnit' territory. While this new plot layer is in part far-fetched, it keeps us gripped and brings to the table another fresh issue: that of abusive relationships. 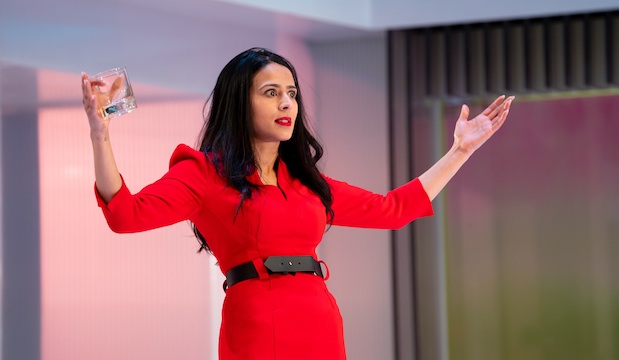 In moments, White Pearl becomes farcical as we observe the toxic politics within the office of a supposedly multicultural company. In the aftermath of the ad going viral, the women turn on one another, hurling racist slurs across the boardroom table and confining one another to base, racial stereotypes. The name-calling is catty and abominably rude. At the same time, it’s refreshing to see the six different Asian cultures represented on a western stage, rather than being lumped together as simply ‘Asian’.

The cast – seven performers, six of whom are female – each have the special power to make us laugh on cue then feel alienated by their decisions and, in extreme moments, afraid of who they are. Each of the characters are three dimensional and our alliances shift between them as they begin to reveal their darker, flawed truths.

Farzana Dua Elahe as Priya Singh is every bit the office bulldog you’d dread to have as a boss and her switch from highflying business woman to hysterical sadist is appropriately terrifying. Minhee Yeo captures Soo-Jin Park’s wickedness through her expressive facial expressions. Meanwhile Kae Alexander’s relatable Built Suttikul has us backing her character all the way. 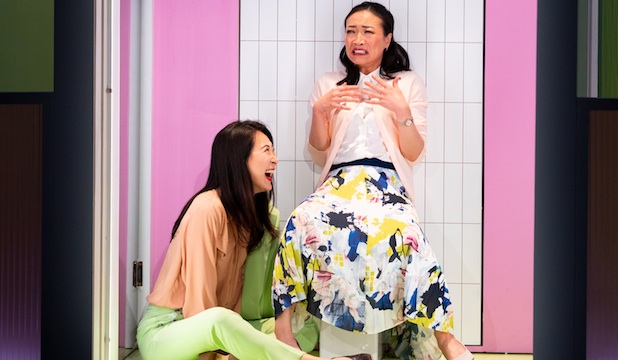 The humorous nature of White Pearl never corrodes the serious issues at its core. When one character behind the advert expresses her support of its message – in full knowledge of what it represents – we’re left to dwell in the uncomfortable reality of the world’s ever-present standardised beauty ideals. In another moment, we learn how the repercussions of the advert would affect the different characters with varying degrees of severity if they were to lose their working visa and be deported.

This is no neat story tie up, but as the disturbingly polorised emotions on stage give way to one final curveball in a plot littered with surprises and twists, we can just about glimpse hope for a more racially united future, at least in the Clearday office.