60 CW readers are interested
Captain Corelli's Mandolin, Harold Pinter Theatre review 3 Captain Corelli's Mandolin, Harold Pinter Theatre review Lucy Brooks
Excitement stirred when it was announced that Louis de Bernières’ much-loved 1994 novel Captain Corelli’s Mandolin was being adapted for the stage 25 years after it was first published. The novel had already been made into a film starring Nicholas Cage and Penelope Cruz in 2001. In 2011, a relatively under-the-radar theatrical adaptation of the novel premiered in Colchester before embarking on a regional tour of the UK. But this production, given a blessing by de Bernières himself, marks the first time the story has been performed on a West End stage.

Adapted by award-winning writer Rona Munro and directed by Olivier and Tony-nominated Melly Still, Captain Corelli’s Mandolin opened at the Leicester Curve in April and toured various venues before transferring to the West End’s Harold Pinter theatre this July. Adapting an epic war story like this – which spans years and generations, plus battles across seas and countries – is no simple task. Where Munro and Still’s production excels is in capturing the narrative so beautifully through choreography, set design and, in what is an inspired decision, the casting of humans as the story's treasured animals. 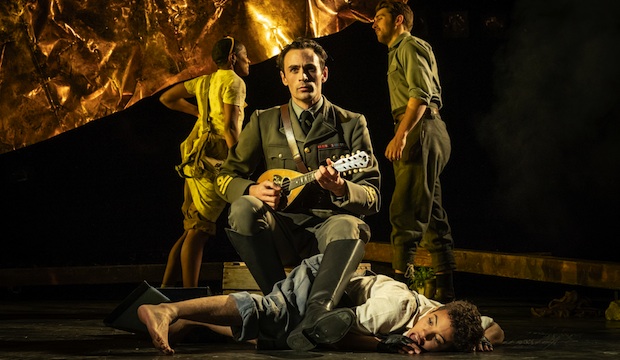 Set during the German and Italian occupation of Greece in WWII, Captain Corelli’s Mandolin tells the story of an unlikely romance on the Greek island of Cephalonia. An Italian captain called Antonio Corelli is sent to live with local physician Dr Iannis and his intelligent, headstrong daughter Pelagia. Despite her attempts to hate everything to do with the occupation, Pelagia begins to fall in love with the mandolin-playing soldier, and he with her. But when Italy joins forces with the allies, Cephalonia becomes a dangerous place for its former Italian occupiers to be, and the lovers are separated.

Mayou Trikerioti is one of the most prominent set designers in Greece. Here, she conjures a charming recreation of Greek village life in a largely non-naturalistic way (save for some garden herbs). A metallic plate hangs crumpled and suspended above the stage where it’s used as a projector. Constellation-like patterns form across it, transforming it into the night’s sky when all is peaceful, then scenes of fires, bullet holes and barbed wire once the war sets in. When the Italian soldiers are freezing to death in the mountains, their faces appear petrified and smothered in a string of tangled white sheets, in what is the most haunting moment of the play. 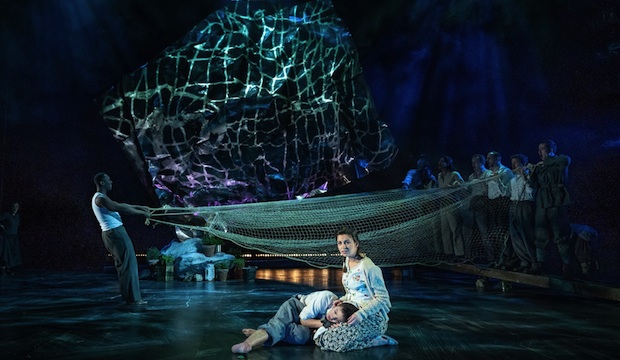 Harry Blake’s score – which largely takes the form of a capella singing – is also instrumental (excuse the pun) in creating a sense of community on stage, be it between villagers singing as they go about their daily chores or the Italian army beginning each day with a love song under the orders of Captain Corelli.

It’s a lengthy text and there’s a lot of material to get through in the first half. Scenes are rapidly jumped between, with people and props flying on and off stage; in one particularly impressive moment, a soldier is shot and quite literally soars through the air before landing his back (cushioned by his rucksack). It’s not until the end of the first half that we meet the story’s titular captain, leaving its central focus – the romance – to blossom entirely in the second half. 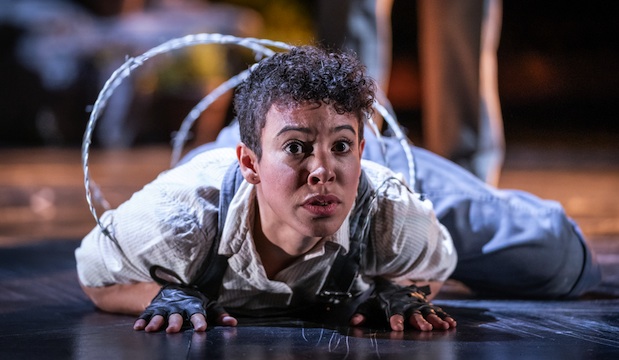 Both Luisa Guerreiro as Pelagia’s goat and Elizabeth Mary Williams as her cat Psipsina give inspired performances. Lithe, nimble and the physical embodiment of their respective animal’s distinctive traits, they trot, flop and leap their way across the stage, providing a welcome antidote to the surrounding war.

The problem with the production is that even once Captain Corelli and Pelagia are united, it’s hard to feel invested in their romance because both Alex Mugnaioni (Corelli) and Madison Clare (Pelegia) deliver their lines with a bizarre, articulated flatness. It’s similarly difficult to feel fear for the army when they’re at war, or sorrow for the characters grieving the loss of their loved ones, because so much of the story is delivered in a monotone. Perhaps this is to keep the pace moving, or to prevent us becoming too wrapped up in the tragedy of the war when ultimately this is a love story. But it means you might find yourself more concerned about the welfare of the imaginary mouse in Francesco’s pocket than that of the soldiers and villagers around him.

Regardless, Munro and Still have created a visually captivating adaptation of de Bernières’ beloved story, bringing us a chance to hear some of his most poignant and frequently quoted lines spoken on stage.