Seven liberal New Yorkers and long-time friends meet upstate for a weekend away in an old farmhouse that one couple is renovating. A snowstorm shuts them in with little food and booze, and no electricity. No matter, they have more important things to discuss, like the crumbling state of their nation and how they got to the point where Donald Trump could conceivably become president. These conversational scenes are interspersed with monologues from a white Christian farmer who used to own the house, and from his adopted Kenyan son Mark, who ages from childhood to manhood as the play progresses.

Shipwreck is delivered by a competent and committed cast, with particular nuance from Fisayo Akinade who plays Mark. From the get go he is the most enticing and complex character, who invites the audience into increasingly upsetting visions of what his life would have been like had he been brought to his home town a few centuries before as a slave. Racial brutality, male rape and the future of his daughter are just a few of the complicated anxieties he wrestles with. 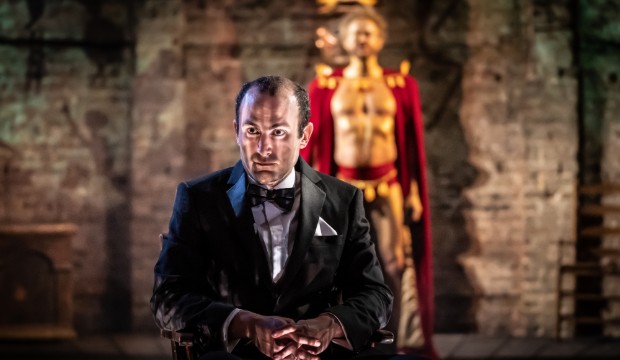 Fantasies, allegories and allusions weave themselves throughout the play, both as themes that the characters try to unpack, musing on how allegories help us understand the world, and as literal scenes, such as when Donald Trump and George W Bush have a showdown over the Iraq War and engage in a punch up fight to end the first half.

The ‘liberal elites’ discuss at length how censorship made Greek and Shakespearean plays eternal, tapping into the universal human condition, as opposed to the fleeting relevance which fuels plays that directly address the political traumas of the day. This feels like Washburn is meta-critiquing her own work. Shipwreck both illustrates loose allegorical fantasies and frankly addresses the political onslaught of June 2017, but this time period now feels stale compared to the moment-by-moment progression of an increasingly frenzied news cycle.

There is no doubt that Washburn has a singular voice as a playwright. She can be poetic, surreal and naturalistic all in the turn of a phrase. Her work has been wildly divisive, particularly with shows like the darkly surreal Mr Burns. Her less contentious adaptation of TV show The Twilight Zone is transferring to the West End this March.

However, Shipwreck doesn’t provide that quintessential Washburn madness that one would hope for. The show doesn’t employ enough abstraction to make it a poignant allegory, nor does it utilise enough realism to create a searing indictment of the new dawn of Trump. If the script was more distilled, this play could pack a gut punch. Instead, it playfully slaps you on the hand and bids you goodnight.