Dominic Hill's A Midsummer Night's Dream at Regent's Park is dark, hilarious and open air theatre at its very best

6 CW readers are interested
A Midsummer Night's Dream, Regent's Park Open Air Theatre review 5 A Midsummer Night's Dream, Regent's Park Open Air Theatre review Anna Hollingsworth
William Shakespeare’s fanciful fable of bickering lovers and mischievous fairies is being performed in various iterations throughout London this summer, but it was always going to be tough to beat a sunset revival in the leafy environs of Regent’s Park Open Air Theatre. The theatre’s bucolic surroundings seamlessly lends itself to the play’s sylvan setting. Well-timed breezes and birds’ evensong are, of course, hair-raisingly atmospheric, but director Dominic Hill has done more than just quaintly staging the play against a tree-lined backdrop; he has managed to harness the untameability of nature as an unstoppable theme which reverberates like a deafening echo throughout the play. Hidden forces, mercurial tempers and atavistic impulses are brought out of the shadows to wreak havoc amongst the characters – and the result is utterly bewitching.

The play opens with a heavy dose of hedonism as Theseus (Kieran Hill), Duke of Athens, celebrates his impending marriage to a less-than-enthused Hippolyta (Amber James) in a vodka-fuelled, beat-boxing bacchanal. The plays’ amorous conflicts are quickly established: Hermia (Gabrielle Brooks) loves Lysander (Michael Elcock) who ardently returns her affections, but her father, Egeus, (Gareth Snook) has demanded that she marry Demetrius (Pierro Niel-Mee) who is beloved by Helena (Remy Beasley). The inevitable drama of domination and defiance is set in motion as the lovers flee to the forest to escape the city’s stifling laws and customs.

It is here where order and reality begin to break down. The illusory nature of the forest is brought to life through a heady mix of live music, puppetry, ventriloquism, and the odd bit of stage trickery which elicits delighted gasps from the audience. But Hill isn't interested in cheap thrills, but rather in unearthing the darkness which lurks beneath the play's text. In this version, the fairies are not just benevolent sprites eager for a bit of impish fun, but menacing shrub-like creatures which crawl terrifyingly across the stage on sinewy prosthetics. They are kept in check only at the behest of the Fairy Queen, Titania, played with imperious brilliance by Amber James. 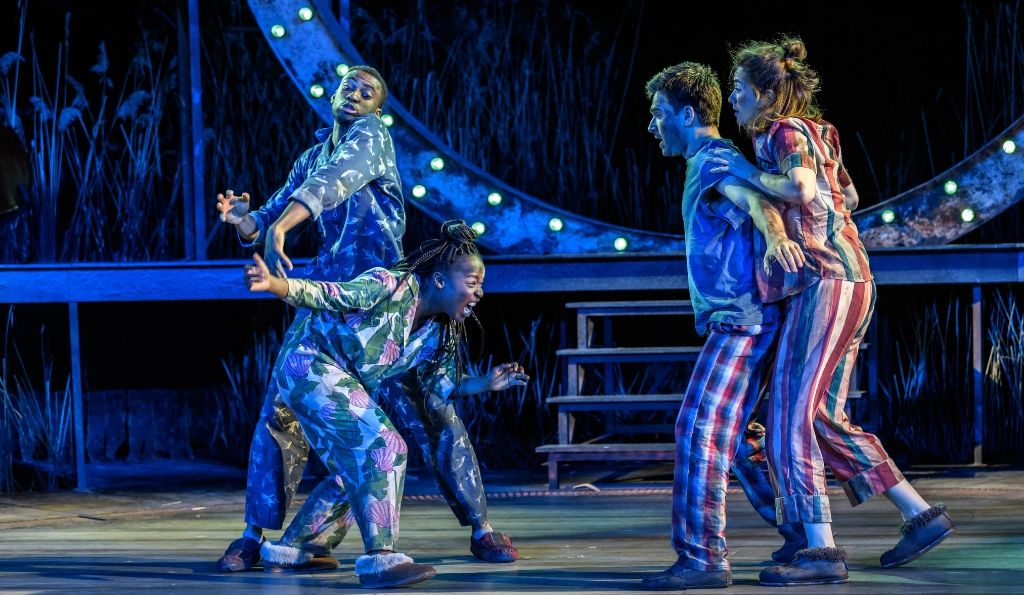 The play’s darker tones are also brought to the fore as the shocking misogyny of the male characters is emphasised. This is not only obvious in Egeus as the classic senex iratus who refuses to recognise his daughter's autonomy, but also through Oberon, whose wounded pride and vengefulness towards Titiana is particularly blood curdling as Kieran Hill venomously delivers the line ‘thou shalt not from this grove / Till I torment thee for this injury'. The tempestuous confrontation between the Athenian lovers also reveals the violence entrenched in Shakespeare’s text as the male suitors seem unable to proclaim their love for one woman without verbally, and at times, physically abusing the other. Demetrius threatens Helena with the prospect of being raped if she follows him into the woods and Lysander almost strangles Hermia to death in order to prove his love for Helena.

But this toxicity is balanced by a triumphant joyousness which pulsates throughout the production. Tightly delivered comedy and impeccably executed physical theatre inspires a constant stream of laughter. Particularly noteworthy is Remy Beasley who is hilarious as the dejected Helena and increases in hyperbolic shrillness over the course of the play. Without a doubt, however, it is Susan Wokoma as Bottom who is the main comedy machine and who carries the subplot with vivacious energy.

The play asks audience members to stare head-on at the untamed wildness of human nature before being brought back into the light through life-affirming celebrations. One leaves this surreal space in Regent's Park and heads back into the reality of the city with the feeling that they have born witness to something very special. 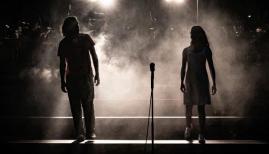 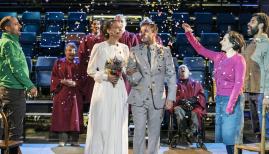