Our Town, Regent's Park Open Air Theatre review 3 Our Town, Regent's Park Open Air Theatre review Anna Scriven
Do humans ever really realise life as they live it? Such is the question at the heart of Our Town, the Pulitzer Prize-winning play written by Thornton Wilder in 1938, which has been revived at Regent’s Park Open Air Theatre in the hands of Ellen McDougall, artistic director of the Gate Theatre. With its nuanced meta-theatrical devices and timeless, philosophical themes, the play has the potential to be just as relevant to audiences today as it was 80 years ago, but while McDougall’s production is a loyal tribute to Wilder’s writing, it fails to ignite its own flame or excite on the contemporary stage.

Set in the fictional town of Grover’s Corner, Our Town is a play within a play and fully aware of itself as a piece of theatre. It’s split into three distinct acts – Daily Life, Love and Marriage, and Death – each of which are introduced to the audience by an omniscient narrator, the Stage Manager (Laura Rogers), who also introduces each member of the internal play’s cast. In similar style to Frank Capra’s better-known but later-written film It’s a Wonderful Life (1946), Our Town follows ordinary people living ordinary lives. 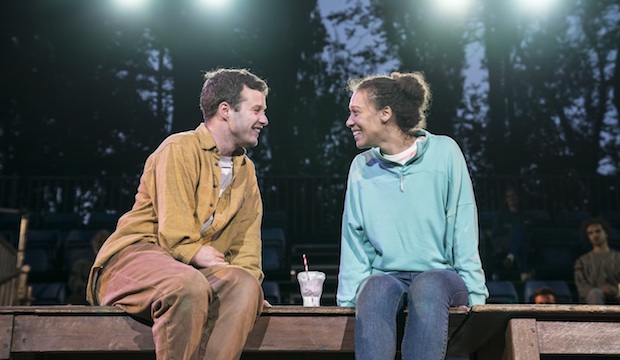 The play hones in on a young couple, Emily (Francesca Henry) and George (Arthur Hughes), relaying what happens to them in the decade between 1901 and 1913. In the slower, sleepier first half, we witness some of the couple’s first interactions before the Stage Manager interrupts to ponder philosophically on the nature of marriage, taking us back to the conversation that sealed the deal for Emily and George.

The second half (and third act) of Our Town is set just a few years later but in that time, the town has mourned several deaths, providing ample opportunity for Wilder, through the mouthpiece of his narrator, to comment on the play’s central theme: the fleeting nature of life. So caught up are we in our mundane chores and trivial concerns, he argues, that we don’t have time to really look at one another. Vocalising this thought further are the play’s now-deceased characters, who peer down on the living, observing with pity the mortal tendency to move around in a state of ignorance while failing to see the bigger picture.

McDougall’s production, designed by Rosie Elnile (The American Clock, Old Vic; The Wolves, Stratford East) takes Our Town from its setting at the turn of the 20th century and places it in a somewhat uncertain era that, from the jock jackets, roll necks and denim, harkens to the final decades of the 20th century, pre the technology boom.

The stage is sparse: rows of bleachers mirror the auditorium, the odd seat filled by members of the 18-strong cast, some of whom are used only to fill the vast stage and create the feeling of a town. 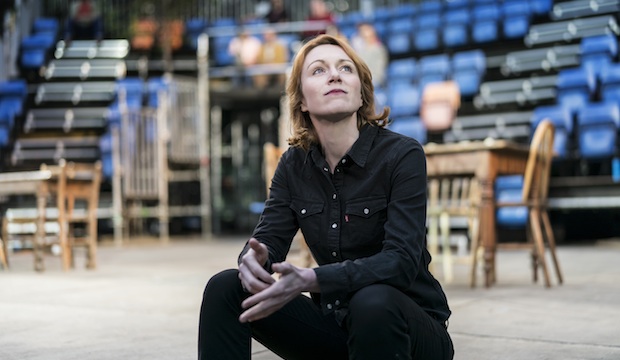 Laura Rogers as the Stage Manager in Our Town

Orlando Gough’s score, made up of folky lilts and a capella singing, captures the mood of the townspeople and moves the narrative forward by seasons and years. In true Brechtian style, tables and chairs are manhandled onto the stage following a wry comment from the narrator that some people need props. In one particularly inspired moment, ice cream scooping is mimed theatrically before two very real strawberry sundaes appear, winning a cheer from the audience.

Between the banal conversations and visually uninspired staging, it’s easy to switch off in the longer, first half of the production. But these earlier drawn-out episodes are really scene setters for the far more profound second half. Here, the dead watch the living grieve with eerie impassivity while we, the audience, could weep in sympathy for the recently deceased character’s dashed hopes for adult life and wistful memories of daily pleasures: food, family and the simple feeling of waking up among them.

Our Town is a play that still has a lot to say in contemporary times. It’s a cautionary tale about the risks of squandering your one chance at life by never fully realising it in the moment, and a philosophical case in point on the fact this is what most humans can’t help doing. While McDougall’s production captures all of this, it misses the mark in its attempt to enthrall us in the narrative or make it feel particularly poignant today.