A leading composer of her generation, Tansy Davies ranks a healthy lifestyle with harmonic skills in her working life 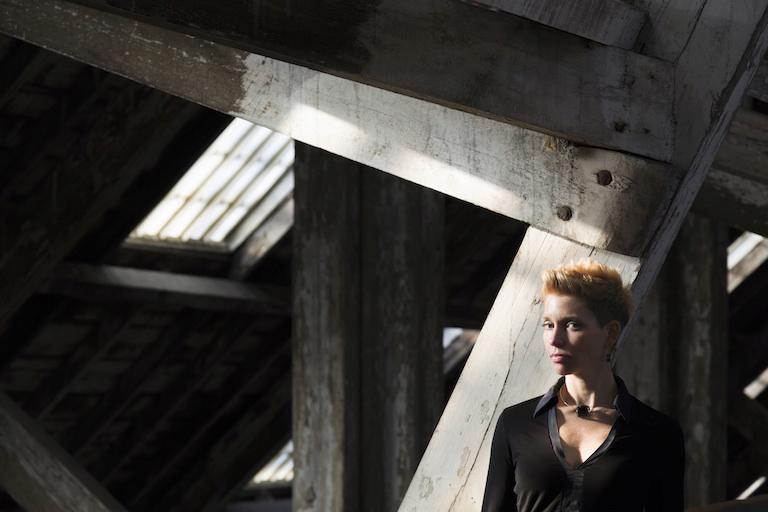 Tansy Davies conjures up an ancient cave in the industrial Printworks. Photo: Rikard Österlund
The music of Tansy Davies is firmly rooted in her own time. Her highly acclaimed 2015 opera with librettist Nick Drake, Between Worlds, was a musical memorial to victims of the Twin Towers attacks. Now the two work are working together again, and while their eyes are set on a dystopian future, the backdrop for their new opera Cave is, as its name suggests, centuries old.

Visits to the extraordinarily ancient and expressive cave paintings of Niaux, in the northern foothills of the Pyrenees in France, were for Tansy a profound experience that she has now translated into music.

Cave is an immersive opera, given its world premiere at the Printworks in Surrey Quays this month. In it, a shamanic figure is isolated but also searching for his daughter, Hannah. While it is not clear how they were separated, we know that he is the survivor of a climatic catastrophe. Safe but alone underground, he begins to communicate with the very space in which he is enclosed.

'Caves were always places with very live acoustics,' says Tansy. She incorporates electronic music in her live instrumental score, to help conjure up the otherworldly place being created by a whole Royal Opera team at the Printworks. This amazing and multi-purpose space is 'like a more industrial version of the Turbine Hall at Tate Modern,' she explains. 'Cave paintings used the contours of the walls to create a 3D effect. It is almost like being at the movies.'

The shaman himself made his first appearance in Between Worlds, and as a more developed character here is sung by one of the most distinguished singers today. The tenor Mark Padmore has carved out a reputation as a highly expressive and communicative story-teller in song, notably as Evangelist in the Passions by J.S. Bach.

'His is a very specific and amazing voice,' says Tansy. Mark Padmore is joined by the virtuosic East London vocalist and performer Elaine Mitchener as the Voice of the Cave (and therefore, of Hannah). Elaine's extraordinary musical and acting skills make her a highly sought-after artist by composers and directors alike.

'I feel very strongly that we've lost our connection with Nature,' says Tansy. 'Nick and I have been fascinated by trying to reclaim the knowledge of a human relationship with Nature. The cave paintings were to do with trying to make sense of the world around early humans, where anything can happen at any moment. The first art is possibly the point at which we became human.'

But being human is a physical as well as an intellectual, spiritual and creative process, and Tansy feels strongly that her work as a composer is underpinned by a rigorous fitness regime. Frequent journeys and endless working days interspersed with long periods of concentration do little for a musician's physical wellbeing. 'Music requires physical endurance, and I couldn't do it without the training I do. As composers we can get stuck in our heads.

'If I can I go to the gym, or go running six days a week. I'm a wannabe vegan, but when I'm travelling that's not always easy. Doing a yoga class is also about being in a community.' And so is making an opera like Cave: 'The "opera family" is quite a small community. I'm incredibly lucky...'

Cave, commissioned by the London Sinfonietta in association with The Royal Opera, is staged from 20 to 23 June 2018 at Printworks, London. Tansy Davies's orchestral suite based Two Worlds is premiered at the BBC Proms on 25 July.