Franz West is set to be Tate Modern's spring blockbuster, as this beautifully realised retrospective celebrates the artist's colourful work

13 CW readers are interested
Franz West exhibition, Tate Modern 4 Franz West exhibition, Tate Modern Joanna Taylor
Mad, irreverent, fun and experimental, Franz West’s work wasn’t taken seriously at first – it just wasn’t made of the right stuff. Who, after all, builds a sculpture from papier-mâché and then displays it on a cardboard box. For years the art world scratched and shook its head. But now West is regarded as an innovator, and, in 2012, a year before his death, he was awarded the Golden Lion at the Venice Biennale.

The Tate Modern has fully embraced West’s eccentricities in this, the first posthumous retrospective of the artist’s work, by inviting his friend and collaborator Sarah Lucas to help design the show. Lucas, whose own work deals with sex and humour, is the perfect woman for the job. She knows exactly what his art needs in order to shine, subtly tweaking the galleries of the Blavatnik building so that the guard ropes tone in with his favourite colours and the partitions look like extensions of the work. 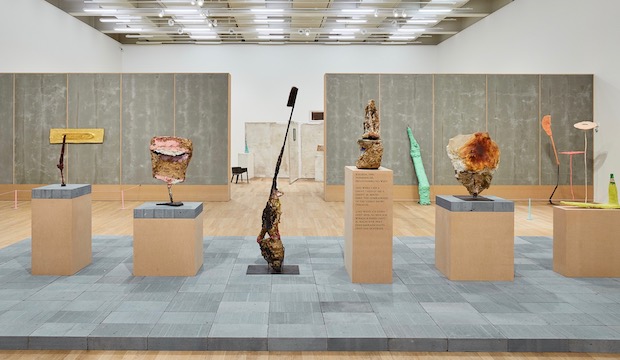 In the early days, much of West’s time was spent living like a beatnik bohemian, getting drunk and taking drugs in the Vienna’s bars and cafes. His early drawings, made, we are told, to please his mother, provide the perfect introduction to his sometimes bawdy practice. They are silly and slapstick, funny and dirty; bespectacled, straight-faced men watch naked women dance, and two collaged faces are added to a lively, cartoony drawing of a couple having sex. There are some tentative experiments in sculpture, too, before we move onto the bolder creations.

Although West is known for huge, snaking aluminium structures, painted in his signature baby blue and bright pastel pink, many of his works were made from more fragile materials. Phone books are mashed into rough approximations of rocks and covered with daubs of paint – the results resembling fictional minerals mined by the hero of some unwritten Jules Verne novel. These amorphous blobs sit on old tables or Lucas’s plinths, carefully designed in MDF and breezeblocks to honour West’s original aesthetic. And sometimes the plinths sit atop the artworks; such is the topsy-turvy nature of his mischievous world.

West was adept at blurring lines. Art and furniture became one and the same, and the domestic finds its way into the gallery space. His mother’s washing machine was stretched and wrung in to a sort of love chair, with the seats set metres apart, painted, of course, in a bright pastel hues. The posters he created for his own shows are here, too, and a series of large painted collages that reveal his sense of design come across less haphazard than the anecdotes surrounding his studio would suggest of his practice. 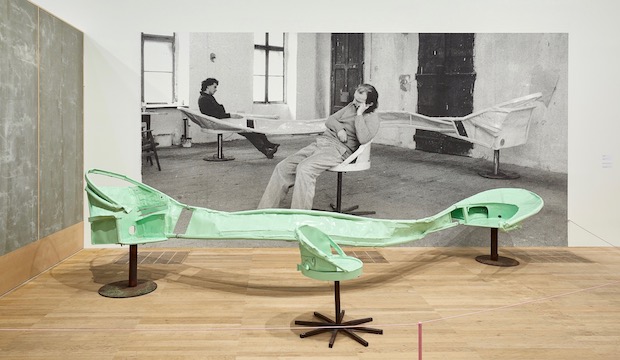 Hanging from the ceiling in the same room is a huge pink sphere, with long protuberances sticking out at all angles. It looks like a virus magnified by a microscope, or some cartoon satellite from The Jetsons. And nearby, a pastel worm curls into a great aluminium doodle. This work, along with several others, is designed to be touched, even sat upon. West believed not only in collaborating with fellow artists, but also with his audience.

It would be easy to see West as the mad hatter of Vienna, an energetic and, at times, argumentative artist, who created some memorably eccentric sculptures. But he is more than that. His work not only influenced Lucas, but also a whole generation of artists who favour interaction and bricolage assemblages. Above all, his art is fun and surprising. And this exhibition does it justice. 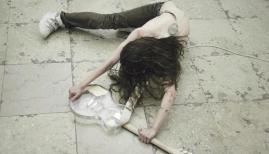 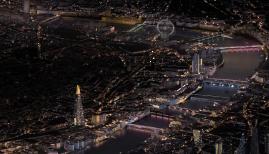