17 CW readers are interested
Edvard Munch: Love and Angst, British Museum Review 5 Edvard Munch: Love and Angst, British Museum Review Lucy Scovell
Edvard Munch (1863-1944) was feeling unwell as he trod the path of a fjord in his native Norway one evening with friends. The sky above them turned a blood red, streaking the sky with ‘tongues of fire’. The scene caused the artist great anxiety, but his companions, untroubled, walked on. This moment of panic was to inspire one of the most famous paintings in art history. The Scream (1893), with its quivering, pallid protagonist, is synonymous with terror of the deepest, most primeval kind.

A print, made by Munch after the painting, sits at the centre of this exhibition. At its border an inscription reads: ‘I felt a great scream pass through nature.’ The emaciated figure, with eyes that look close to popping out of their sockets, is not issuing the eponymous noise, but is rather – as curator Giulia Bartrum puts it – the ‘tuning fork’ through which the shrill terror of the world vibrates.

Drama, passion, anxiety and death – these were Munch’s currency. The death of his mother when he was just five years old, and then of his sister when he was 14, haunted the troubled artist for his entire life. Here, there is a heart-rending etching of the young Johanne Sophie on her deathbed, the outline of her pale face so faint that she appears to dissolve into translucency, fading from existence. Next to her, Munch’s aunt Karen Bjølstad mourns the girl’s passing, bowed in grief. The dying child was a subject that Munch would revisit time and time again. 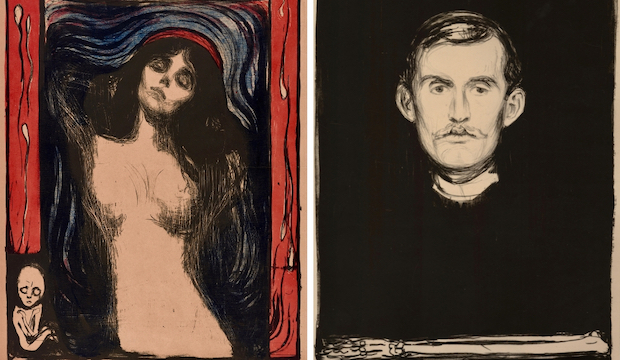 Passion and loss stalked Munch’s life, and death and desire went hand in hand. One print depicts a beautiful young woman embracing Death with sperms and foetuses occupying the border. Childbirth, syphilis and tuberculosis were perhaps the greatest perils of the era, and Munch knew this well. Another print, deemed obscene at the time, shows an emaciated woman unveiling her ailing child, who is afflicted with congenital syphilis.

Munch was the art world’s answer to playwright Henrik Ibsen. He painted what the Norwegian writer penned for the theatre – jealousy, adultery, madness and disease. Such was their affinity, Munch was commissioned to illustrate theatre programmes for Ibsen’s plays. Also displayed here are eerie portraits of the dramatist, in which his head floats, seemingly disembodied, against the blackness of stage curtains. This recalls Munch's self-portrait at 33 years old, his face suspended against a void, a skeleton's arm placed across the bottom edge of the page. It is a memento mori, a reminder of Munch's own mortality at the dawn of a violent century.

There are also paintings here, but this exhibition is about prints. Those expecting to see The Scream rendered in oil paint will be disappointed. But Munch’s prints are in no way secondary to his other work. Lithography (images printed from sketches made on stone) was one of his favoured methods, and it so perfectly suited his strong, but trembling lines. Sometimes left in monochrome, sometimes painted over, these images convey the terrible and inescapable beauty of life.