But for Goncharova it was the folk art of her native Russia and the traditional fashions of the Tula Province, where she grew up, that would have the biggest impact on her life’s work. Her family had made their fortune through textiles, and so she was familiar with its production from beginning to end. A beautifully embroidered dress displayed here serves as an example of the craftsmanship of the region and the hot reds and oranges, the birds and flowers of these folk pieces, run through Goncharova’s work from her early paintings to the designs she later made for the theatre. 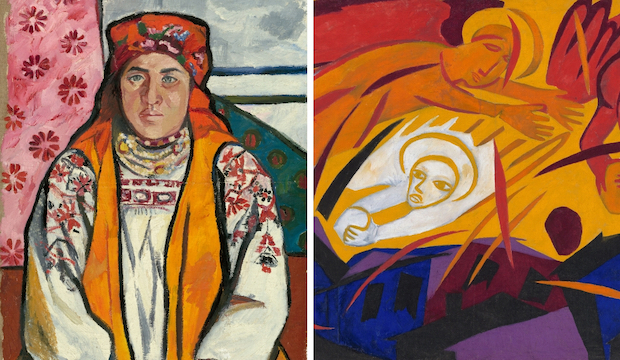 A painting entitled Harvest, perfectly demonstrates her early influences. It was originally made on nine separate canvases, two of which are now lost. Those bright, warm hues are here again, and the pared back animal motifs are mixed with religious imagery from the Bible. It includes a serpent-tongued man with a staff, a pair of feet treading the grapes of wrath and a woman riding a two-headed beast. This is the end of the world presented as harvest scene, a vehicle of joyous expression, rather than apocalyptic terror, and it would make a wonderful stained glass window.

Goncharova’s interest in religious art would see her work censored by the authorities on more that one occasion. She was attracted to the stylised forms used in churches and religious manuscripts and advocated their preservation, but in 1912 and 1913 her painting The Evangelists was removed from exhibitions as it was deemed inappropriate for an avant garde exhibition, not to mention an unsuitable subject matter for a woman.

But Goncharova was one to do things her way. She is known to have paraded through the streets of Moscow wearing face paints and extravagant clothes and became a sartorial trail blazer among the bohemian set in Moscow, where a fashion house commissioned her to create new designs. In 1915 she toured Europe with Sergei Diaghilev, the founder of the Ballets Russes before settling in Paris with her partner Mikhail Larionov. Unable to return to Moscow because of revolution and civil war, they would live there for the rest of their lives. 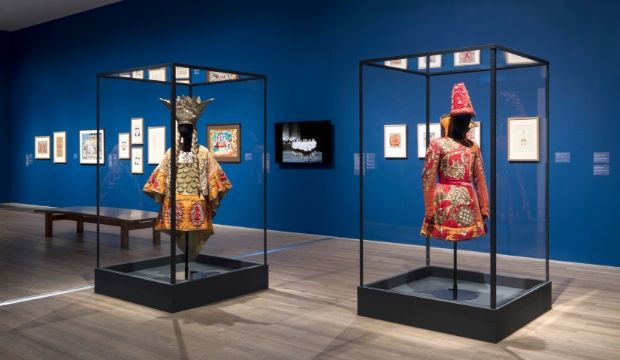 Goncharova’s designs and a selection of the realised costumes she made for Diaghilev and others are on display in the last room, which has been darkened like a theatre, with the display cases spot lit like actors on a stage. A tunic for the Sea Princess in Sadko, on loan from the Victorian and Albert Museum, might be one of Goncharova’s paintings come to life, with her trademark colours and folk patterns. A video plays extracts from the Ballets Russes’s performance of Le Coq d’or in 1938, showing the actors twirling in her joyful costumes.

Some rooms of this exhibition shine brighter than others. Sometimes it is as though Goncharova’s art is too varied, too much, perhaps, for the curators to know how to consolidate them in a single space, but mostly this exhibition is captivating, and full of exuberance, even when the subject strays into darker territory. Goncharova was the last champion of a disappearing world, an era rich in folk art, and through her, the traditions of her homeland lived on just a little bit longer.