Swiss artist and healer Emma Kunz predicted that her drawings were destined for the 21st Century. Serpentine Gallery London presents the first UK solo exhibition of her work

Emma Kunz exhibition, Serpentine Gallery review 3 Emma Kunz exhibition, Serpentine Gallery review Michael Dalton
In her lifetime Swiss healer Emma Kunz (1892 – 1963) produced over 400 geometric drawings, which she used to diagnose her patients. It might sound far-fetched, but Kunz was not the only spiritualist-cum-artist working under the radar in the 20th century. Her contemporary, Hilma af Klint used art to articulate her mystical vision and English medium Georgiana Houghton channelled the spirit world to produce her spidery works. Amazingly, none of these women knew each other.

Kunz would sometimes work on a single ‘energy field’ drawing for 24 hours without rest, creating complex geometric designs on graph paper with coloured pencils. Séance and ritual were central to her practice and in 1938 she started using a divining pendulum to dictate her patterns. The resulting designs were then consulted for a range of insights into individual problems and issues with the world at large. 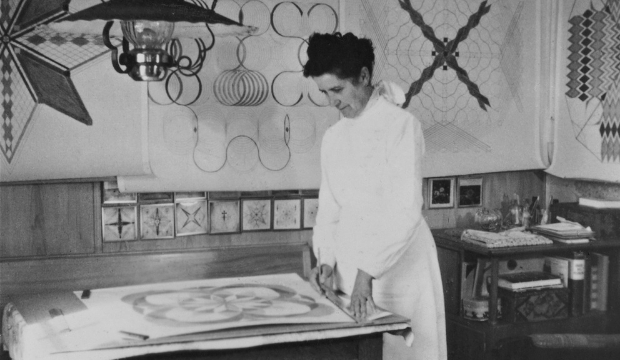 In 1942 Kunz discovered a stone in a Roman quarry that she believed had healing properties. The rock, which she named AION A (meaning without limitation), is still available in powdered form in pharmacies throughout Switzerland. Curator Hans-Ulrich Obrist claims to take this remedy daily. Such was the importance of AION A to Kunz, that artist Christodoulos Panayiotou, a collaborator on this exhibition, has made benches from the stone, which are positioned in every gallery throughout the show.

Whether you believe in the healing possibilities of Kunz’s drawings or approach such things with scepticism, it must be said that as artistic objects, her drawings are extraordinarily elegant and complex things. She never trained as an artist, but the aesthetic appeal of her work is undeniable, seeming to flirt with modernism, despite the fact that she is said to have almost never engaged with the art world.

Although she published three books in her lifetime, Kunz’s work was not exhibited until after her death. She explained very little about individual drawings, all of which remained untitled, but believed that they were destined for the 21st century. And that prophecy certainly came true. 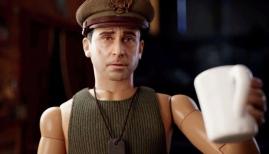