What to see at Frieze Art Fair 2019: read our insider's guide and navigate the scrum with flair 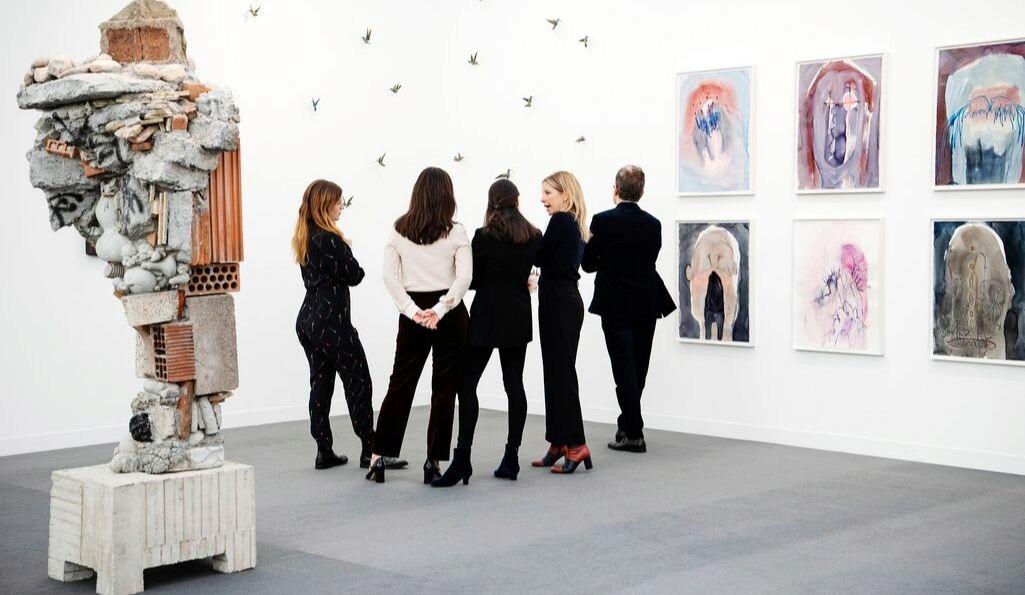 Frieze London 2019
It's that time of year again, when the great and good of the art world descend onto Regent's Park in a whirl of champagne, eccentric hats and gallery-branded tote bags. Frieze Art Fair is finally here.

Two colossal tents have taken over Regent's Park, one housing Frieze London, the other housing Frieze Masters. Around 160 galleries have built temporary booths within their tents, showcasing (and hoping to sell) the best of their collections.

This is the place to see and be seen. Mill about, talk to the gallerists and enjoy the spectacle. But know that Frieze London is a monumental affair and an impossible task for one day. Read our insider's guide to navigate the scrum with flair. 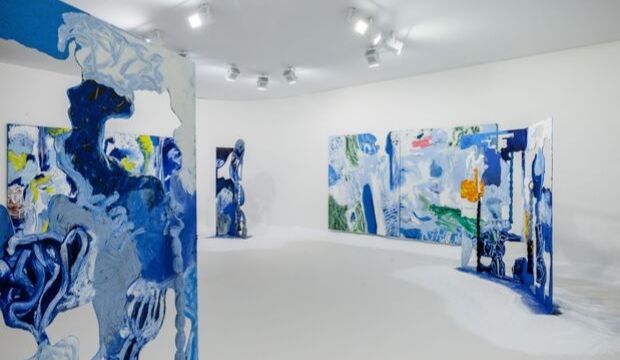 Simon Lee Gallery's solo presentation of Bolivian-American artist Donna Huanca has got everyone talking. The booth is an installation of Huanca's paintings mounted on shallow banks of white sand. As you walk in you will notice ambient sounds of birds and a scent that the artist has specifically designed to accompany the work, which is evocative of the fragrance of Palo Santo, a tree native to South American used in ritual purification ceremonies. Huanca's installations are also performance spaces, but here her freestanding works replace the painted women that she uses to examine ideas of gender and ecology. 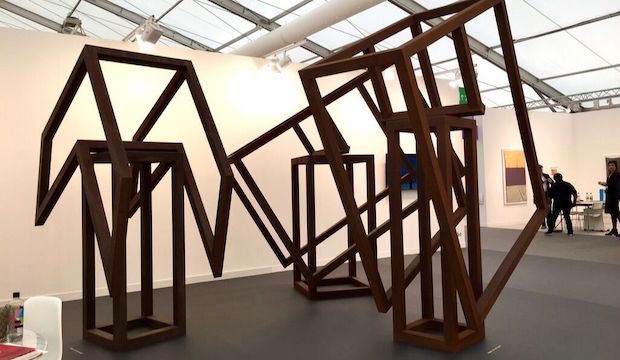 Galeria Nara Roesler's display of Raul Mourão's sculptures are stopping visitors in their tracks. The enormous iron frames rock on their cuboid bases for up to an hour without any intervention or mechanical devices. The Brazilian artist's work sits at the intersection of documentary and fiction and these works are in part inspired by the precariousness of the art world in his home country. 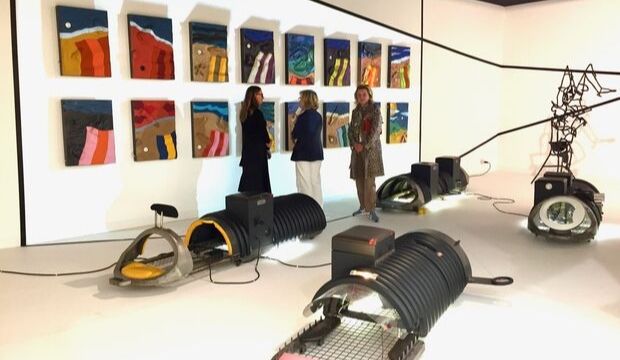 There's a lot going on at Kamel Mennour's stand. The gallery is showing the work of Neïl Beloufa, which includes bas-relief panels depicting beach towels on sand (each has a charging point you can plug your phone into), juxtaposed with strange semi-cylindrical structures, which seem to have personalities all of their own. Are they sunbeds, post-industrial coffins, or some type of futurist sleeping bags? There are no answers here, just a strange landscape of recycled materials that seem the product of both the present and the future. 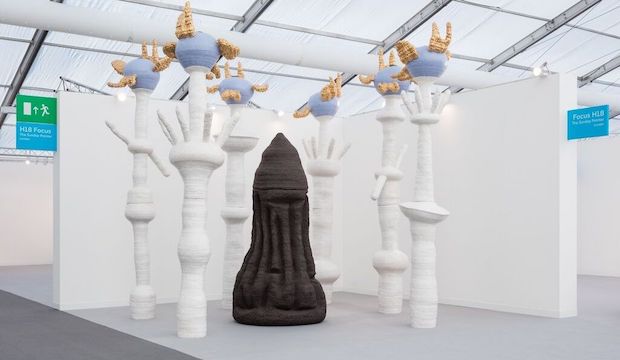 The Sunday Painter's solo presentation of artist Nicholas Pope's huge ceramic works is hard to miss. Yahweh and the Seraphim (1995) was born out of an earlier project, conceived as a sort non-denominational chapel. Pope is interested in the current move towards belief over knowledge and expertise. He represented Britain at the 1980 Venice Biennale, but his career was put on hold after he contracted a rare form of encephalitis, which saw him seriously debilitated for almost a decade. This experience marked a shift in his work to more philosophical ideas and softer, natural forms. 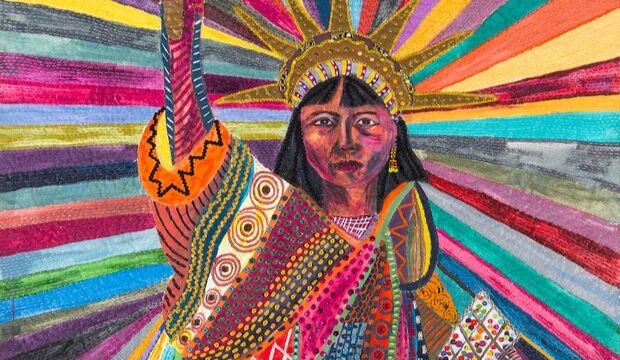 Eight Galleries make up the section Woven, which casts a spotlight on work made with fabric. These works bring to light colonial legacies and political turmoil through an art form that has been neglected by the art world until recent times. The artists featured in this section come from as far away as Madagascar and China. Look out for Pacita Abad's work in the Silverlens booth. She is an artist hailing from the Philippines and her large, vibrant works tackle narratives around immigration and the American Dream. 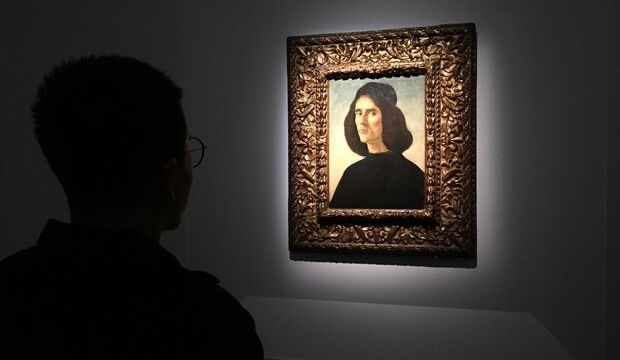 Trinity Fine art presents The Last Botticelli: Michele Marullo – Soldier Poet of the Renaissance. This single, very special, work is tucked away behind a screen and is the only Botticelli that remains in private hands. The subject of this painting was an exile from Constantinople, after it fell to the Turks. He was also a renowned poet at the Medici court, as well as a mercenary. He married a strong, well-educated poet, who, it is thought, commissioned this work after he drowned in the Cecina River in 1500. 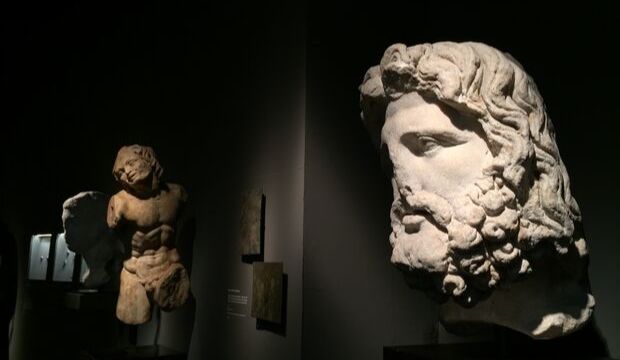 Near The Last Botticelli is ArtAncient's Timeline, a walk through art from the earliest natural forms (including a beautiful iridescent green ammonite), through to prehistoric axes and figurines, classical sculptures and modern carvings. The 65 objects chart 6.5 million years of materials, reminding us that even the most recent works made of simple stone or marble, are millennia in the making. Central to the display is a limestone slab containing snails that lived 145 million years ago. Into this stone was carved the name of the invading Roman legionary that first landed on the shores of Britain. This same piece of stone was then used in the construction of a building centuries later, but has finally found its rightful home in a museum. 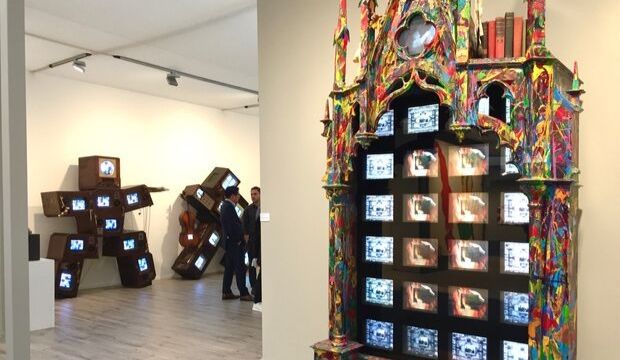 Gallery Hyundai's solo presentation of Nam June Paik's work is a real show-stopper. The gallery worked with Paik from 1984 until his death in 2006 and the works on display here fuse the artist's interest in the old and the new, the technological and the spiritual. Using TV sets, he produced robotic forms that flicker and whirr. One such structure is named after the avant-garde composer John Cage, who became a life-long friend and mentor to Paik after their meeting in 1958. 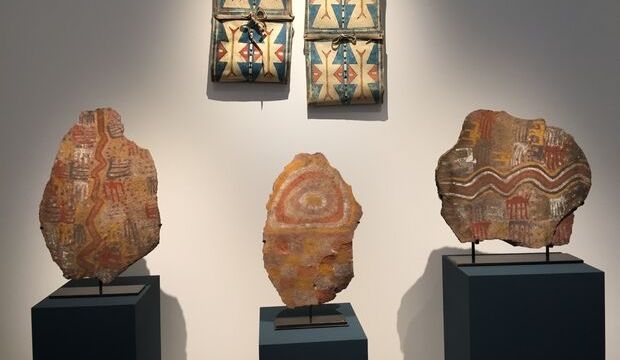 Donald Ellis Gallery's booth has a stunning array of Native American art, dating back hundreds of years. Included here are parfleche (tough decorated hides), carvings and masks, as well a collection of drawings from those living on the Great Plains of North America. These drawings, made on pages torn from accounting ledgers after the 1860s, represent daily life, successful hunts and rituals. This was a pivotal time for the peoples of the Great Plains, as they were displaced from their traditional lands and forced into reservations, and this shift can be seen in the subjects depicted. 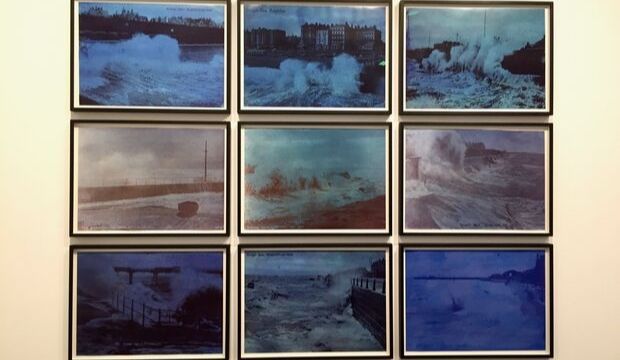 Lisson Gallery has curated a solo booth of Susan Hillier's work, spanning decades and mediums. Hiller died in January this year, and together with her son Gabriel, the curator has put together something of a tribute. Hiller was born in the US, and on moving to Britain was amused by our obsession with the weather. She collected postcards of stormy seas, which she later transformed into the tinted prints shown above. There are also pages from her son's colouring book dating back to the 70s with some quite unbelievable gender stereotypes portrayed. In fact, they are so extreme they seem almost to be a parody. Humour is present in much of Hiller's work. Also here is a sofa upholstered with silk ties and a painter's palette transformed into a coffee table-cum-ouija board. 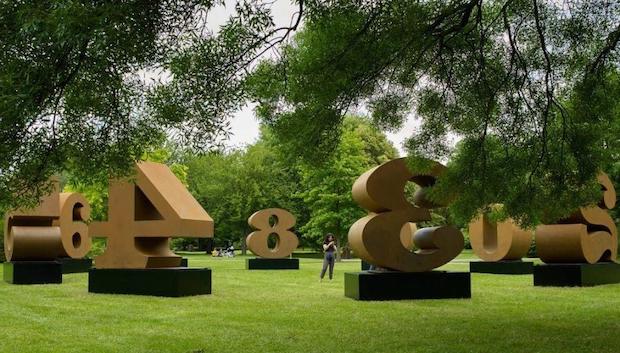 The sculpture park is, quite possibly, our favourite part of the whole affair. Freed from the claustrophobic and overwhelming interior of the tents, the artworks are allowed to breathe. You wander through the park, dodging joggers, to be surprised by sculpture behind a corner, or hiding underneath a tree. It's great fun. Walk from Frieze London to Frieze Masters (or vice versa) to take it all in.