Students of the Rambert School of Ballet and Contemporary Dance brought the Next Generation Festival to a close at Linbury with a vibrant, abundant and diverse show

The programme consisted of no less than eight pieces, and with that amount of material inevitably the quality ranged from very good to indifferent. What is not in doubt, though, is the quality of the second- and third-year Rambert School students and the versatility they showed in a programme that asked them to embody the rigour of Christopher Bruce, the anarchy of Cree Barnett Williams, the quirkiness of Matthew Bourne and a lot else besides.

Christopher Bruce is one of the biggest names associated with Rambert, a school alumnus and former principal dancer with the company, acclaimed choreographer and now patron of the Rambert School. It was only fair that the programme should kick off with a work by him, Dancing Days. 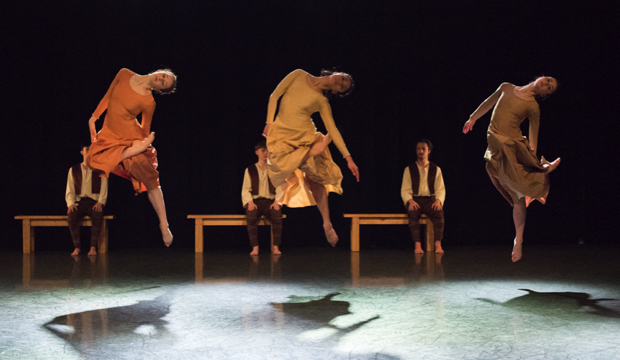 Rambert School Students in Christopher Bruce's Dancing Days. Photo: Chris Nash
Created for the school back in the early 1980s, the choreographic rigour and flow of its contemporary language make Dancing Days a classic of its kind and a pleasure to watch. Set to Gustav Holst’s Four Songs for Voice and Violin Op 33, it is a work for three couples that follows the music’s religious medieval tones. The third-year dancers did it full justice, with impeccable partnering alternating with cogent solo dancing.

Second-year dancers had the most fun: it fell to them to dance excerpts from two Matthew Bourne works: Sleeping Beauty and Highland Fling, Bourne’s iconoclastic take on the Romantic ballet La Sylphide. Bourne’s style is very much his own, and dancers of his New Adventures company are well versed in it; what was remarkable in the Rambert School show was how the students took to its earthbound physicality, its skewed humour, and its frantic movement.

Also well worth a mention was Mthuthuzeli November’s A Place of Gathering. 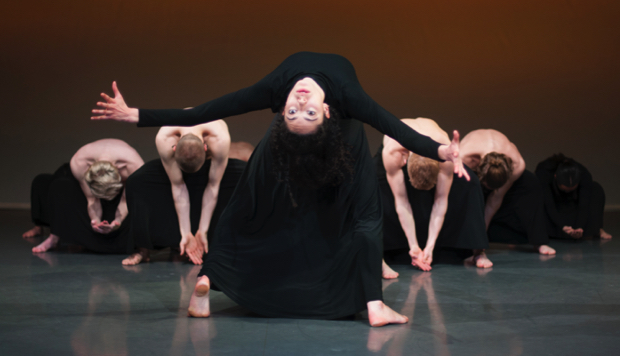 Rambert School students in Mthuthuzeli November's A Place of Gathering. Photo: Chris Nash
Ballet Black dancer November is now established as a choreographer of note and this work, created for Rambert School with music by November himself – drums and the low chords of a cello – offered a vaguely Japanese visual, with the cast of 14 in long black skirts, performing rhythmic movements reminiscent of martial arts.

Two groups, men and women, seemed intent on confrontation before gradually mellowing and coming together to create a human mound that raises a chosen one up to heaven. It’s a very accomplished work and, incidentally, the only one that required pointe work from the women.

Alleyne Dances’ rather nasty Innocent Children, which Rambert students presented as part of An Evening with the Next Generation, didn't improve on second viewing; on the contrary, it appeared even more pointlessly violent. It stuck out unpleasantly in an otherwise enjoyable programme, which included works by Rambert School alumni Richard Chappell and Cree Barnett Williams, and a piece by school deputy principal Darren Ellis.

A Place of Gathering