The Car Man, Matthew Bourne’s reimagining of Bizet’s Carmen, returns to the stage, boosted and enlarged for the vast space of the Royal Albert Hall

A desolate road flanked by rickety electricity posts cuts a gash through the entirety of the RAH arena, leading to a large stage where Lez Brotherston has reworked and enhanced his original set: to our left a garage complete with two cars, to our right Dino’s diner lit up in red, above both two large billboards, which at key points in the story become movie screens showing close-ups of the key players. 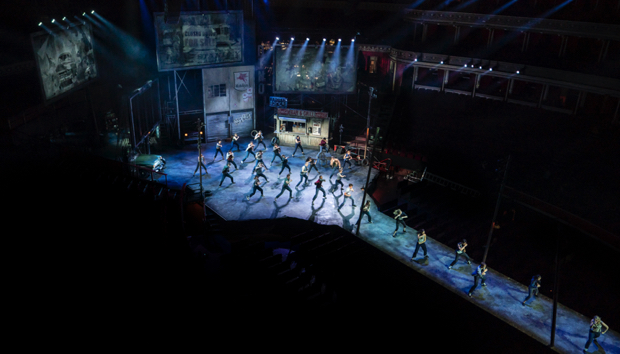 Matthew Bourne's The Car Man, The Company. Photo: Johan Persson
Faced with that, you know that Bourne’s hot, sweaty, oil-stained story of unbridled passions leading to sordid crime in a 1960s hick town somewhere in deepest USA, has become bigger with all its emotions heightened – Imax, say, rather than your local neighbourhood picture house.

The comparison arises because Bourne, whose magpie approach to creation seeks inspiration in all manner of sources, in particular early Hollywood movies, here drinks deeply from the noir The Postman Always Rings Twice.

The drifter Luca, powerfully danced on press night by Will Bozier, walks lazily the length of the road, arriving to cause havoc among the inhabitants of the small town: Dino, the brutish owner of the diner and garage (Alan Vincent), his frustrated younger wife Lana (Zizzi Strallen in great form on her return to the role), Angelo, a gentle young gay man (Paris Fitzpatrick, deeply affecting) and Lana’s sister, Rita (Kayla Collymore), who’s in love with Angelo.

Each corresponds loosely to characters in Bizet’s opera Carmen, and the work is danced to Rodion Shchedrin’s Carmen Suite, an arrangement of Bizet’s original score, here complemented by Terry Davies and by superbly played live under the baton of Brett Morris. 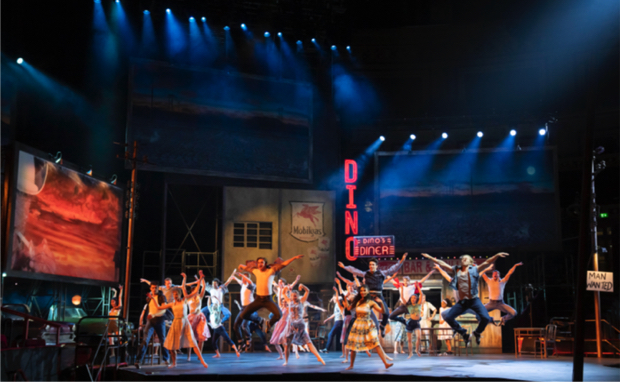 Matthew Bourne's The Car Man, The Company. Photo: Johan Persson
Matthew Bourne doesn’t do subtle, so everything in The Car Man is brash, from the vigorous ensemble dances that open the action and are obviously inspired by West Side Story, to the fateful and very graphic sex scene between Luca and a devouring Lana.

Dino’s murder with repeated blows from a wrench is protracted, violent and very bloody; his return as a figment of Luca’s imagination as he succumbs to drink-fuelled remorse, is terrifying.

Great storyteller that Bourne is, there is, however, a narrative imbalance in The Car Man. The first Act is thin on plot, with much ensemble dancing that, exciting as it is at first, finally feels like padding. It drags a little. The second Act is much better: its narrative tighter and plot-driven, it flies by to its inevitable, though still startling, conclusion. 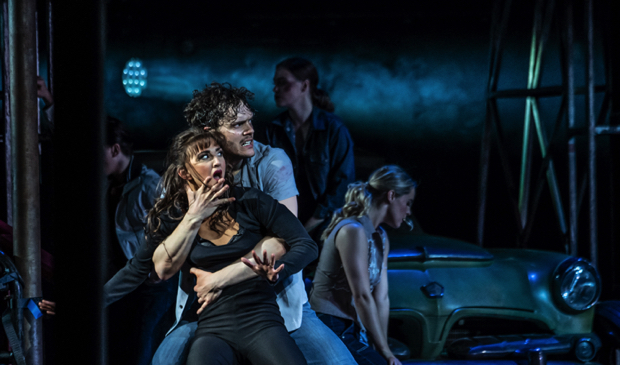 Matthew Bourne's The Car Man. Zizzi Strallen as Lana, Will Bozier as Luca. Photo Johan Persson
This is not to say that The Car Man at the Royal Albert Hall isn't an entertaining show. On the whole it is – very! - and the sheer verve and quality of the New Adventures performers, a cast augmented to 39 from the original 17, brings it to vibrant life. A tightening of Act I would, I feel, enhance its impact.