Eagling’s intention was, apparently, to present a darker version of this Christmas fantasy; in reality, he ended up with often pedestrian choreography and a very muddled narrative. If the question why? springs to your mind regularly during a performance, then something is amiss.

Not everything is bad, of course. Eagling kept Tchaikovsky's glorious score, played live by the English National Ballet Philharmonic under Alexander Ingram. After a short prologue that sees the child Clara (Tring School pupil Annalise Wainwright-Jones on opening night) getting ready for the party in her pretty duck-egg blue bedroom, the curtain goes up an a wintry scene, with people ice-skating outside Clara’s imposing home. The ice-skating is a lovely touch.

Eagling has re-choreographed the Christmas Eve party, in particular the divertissements presented by the mysterious Drosselmeyer (Fabian Reimair),which come as a marionette theatre, to be reprised in Act II. Clara duly receives her nutcracker and goes to bed a happy, dreamy little girl.

At the stroke of midnight, though, everything changes, including Clara, now performed by an adult dancer, lead principal Erina Takahashi on opening night. In a drastically transformed living room, she is soon confronted with a vast army of mice, led by the ferocious Mouse King (William Simmons). 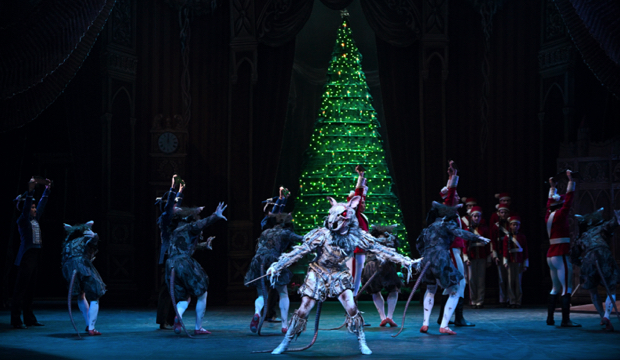 English National Ballet in Nutcracker. Photo: © Laurent Liotardo
So far, so close to the original. The battle between mice and a full complement of soldiers, including infantry, cavalry and artillery, is long and hard fought and, of course, the Nutcracker, no longer a doll but a real person (Aitor Arrieta), partakes bravely.

One of the most confusing aspects of Eagling’s concept arrives now, with the Nutcracker splitting into two characters, sometimes becoming Drosselmeyer’s dashing nephew (Francesco Gabriele Frola). Why? Never properly answered.

The battle finishes, but King Mouse is not killed and again you have to ask why, since traditionally it’s his death that breaks the nutcracker curse. Instead he’s free to pop into Act II, which he does with annoying regularity.

Clara, Nutcracker and Drosselemeyer take off in a hot-air balloon. 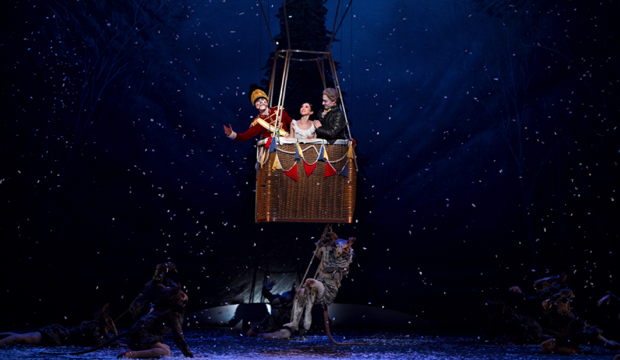 English National Ballet in Nutcracker.Photo: © Laurent Liotardo
But far from going to the Kingdom of the Sweets, they fetch up outside a dingy theatre (not one of designer Peter Farmer’s best efforts), from where the various divertissements emerge.

Again, why? In the original, Clara and the Nutcracker are received by the Sugar Plum Fairy and her Prince and shown a series of international dances for their pleasure and instruction. Here, though, it’s unclear who all those people are dancing for.

And there is no actual Sugar Plum Fairy. Instead, the pas de deux is performed by Clara and the Nephew. Beautifully, as it happens – both Takahashi and Frola are consummate artists – but why? 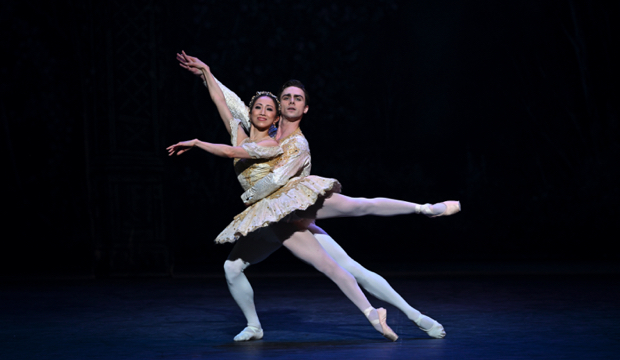 Erina Takahashi and Francesco Gabriele Frola in ENB's Nutcracker. Photo: © Laurent Liotardo
ENB dancers put in their all, and if there were a number of imprecisions in ensemble work, particularly in the dance of the Snowflakes and Waltz of the Flowers, that can perhaps be attributed to first-night nerves. It’s always a pleasure to see this company dance – both ensemble and engaging soloists – but they deserve a much better Nutcracker.