Review: The Royal Ballet, The Nutcracker ★★★★★

The Royal Ballet fired the first shot in the battle of The Nutcrackers with its immaculate, heart-filling production of the classic Christmas ballet

Should somebody tell you they don’t ‘get’ the magic of ballet, send them to The Nutcracker, preferably in its glorious Royal Ballet production. Combining magnificent dancing with a story sure to awaken the inner child in even the most cynical adult, stunning designs and Tchaikovsky’s miraculous score, The Royal Ballet’s The Nutcracker is an unparalleled Christmas treat.

This 1984 production by Sir Peter Wright, whose 95th birthday was celebrated with his presence on stage at the end of Thursday’s matinee, relies on Lev Ivanov’s original Russian choreography, but has been gently reworked and tweaked over the years to bring it as near to perfection as possible.

Act I is the Christmas Eve party at the German home of the well-to-do Stahlbaum family, sumptuously designed with a wealth of Biedermeier period detail by Julia Trevelyan Oman. Returned to its full bustle after a Covid-dictated reduced version last year, this party is a delight: with its adults in a flurry of socialising and a gaggle of excited children, everywhere you look there’s a little drama going on. And that’s even before we mention the imposing Christmas tree…

The central character of Clara was danced with suitable girlish charm by the new principal Anna Rose O’Sullivan, who’ll undergo a complete metamorphosis later in the run to dance the key role of the Sugar Plum Fairy. As one of the Royal Ballet’s brightest prospects, few doubt she’ll achieve it.

Her Nutcracker was soloist Joseph Sissens, a dancer with dazzling classical line, coming along nicely as an attentive partner; and a mention must go to young Sasha Dobrynin-Lait, an absolute natural in his role as Clara’s tiresome younger brother.

Orchestrated by the commanding Gary Avis as Dr Drosselmeyer, the transformation of the living room into a magical winter landscape arouses a sense of wonderment, intensified by the corps de ballet in fantastic form as the Snowflakes. 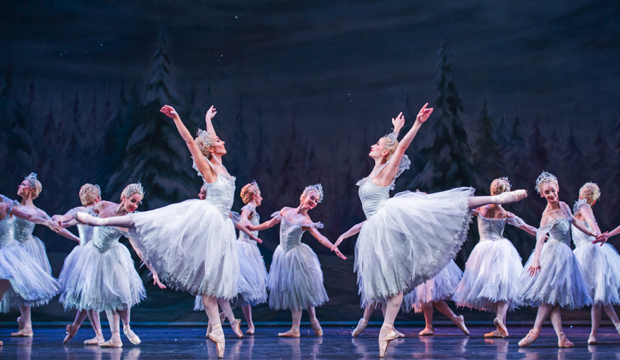 Artists of the Royal Ballet in The Nutcracker ©2015 ROH. Photo: Tristram Kenton
Act II is set in the Kingdom of the Sweets where Clara and her Nutcracker, returned to his human form as Drosselmeyer’s nephew Hans-Peter following a fierce battle with an army of giant mice, enjoy and take part in a series of divertissements, before we reach the culmination of the ballet, the grand pas de deux for the Sugar Plum Fairy and her Prince.

Danced by Marianela Nuñez and Vadim Muntagirov, it is difficult to find adjectives to match its beauty and sheer perfection. Established stage partners, these are two exceptional dancers at the top of their game: Nuñez’s sublime phrasing totally attuned to the music, each of her movements deliquescing smoothly into the next one; Muntagirov, the epitome of the danseur noble, with something feline about his elastic jumps and silent landings. 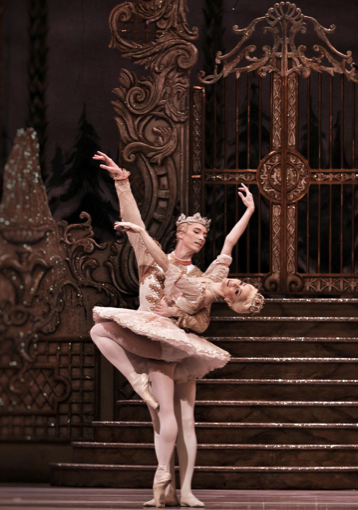 Marianela Nuñez and Vadim Muntagirov on The Nutcracker, The Royal Ballet © 2020 ROH. Photo: Rachel Hollings
Your heart soars; you never want it to end… but end it must, and so enthralled have we become by the whole thing, so taken with the characters that, like me, you’re likely to feel a sense of profound happiness when Drosselmeyer and Hans-Peter, finally released from the curse that had turned him into an ugly nutcracker, are reunited and embrace as the curtain comes slowly down.

A final word to the Orchestra of the Royal Opera House, in fine form under the baton of Koen Kessels.