Matthew Bourne’s Nutcracker! danced with thrilling seasonal sparkle by his New Adventures Company at Sadler’s Wells, is the perfect fun-filled antidote to our fraught times

Bourne’s Nutcracker! both faithfully follows and simultaneously subverts the plot and established scenes of the classic ballet, using a shortened arrangement of Tchaikovsky’s emblematic score, played live by the New Adventures Orchestra conducted by Brett Morris.

It starts, of course, with a Christmas Eve party, but this is not a cosy do in a well-heeled bourgeois household. Rather it’s a dispiriting party in a grim orphanage, grudgingly thrown by the sinister director Dr Dross and his equally unpleasant wife for the benefit of the visiting governors.

Anthony Ward’s designs create a dingy room of dirty white tiles with one gothic window of smeared glass panes and a few metal-frame beds. A ratty Christmas tree is hurriedly put up, the 16 orphans dressed in plain grey smocks ordered to wear paper crowns and act happy and grateful.

They dance boisterously, for these orphans are spirited children, none more so than Clara (Cordelia Braithwaite), forever finding small ways to circumvent the tyranny they live under and the constant persecutions of the directors’ hideous offspring, the black velvet-clad, gluttonous Sugar (Ashley Shaw) and Fritz (Dominic North).

From a box of old toys proffered by the elderly governors Clara takes an ungainly doll. At the stroke of midnight, though, this mock nutcracker turns into a handsome young man (Harrison Dowzell) before Clara’s besotted eyes, and as the orphanage walls slide away to reveal a magical winter landscape, the young couple find themselves on a Frozen Lake. 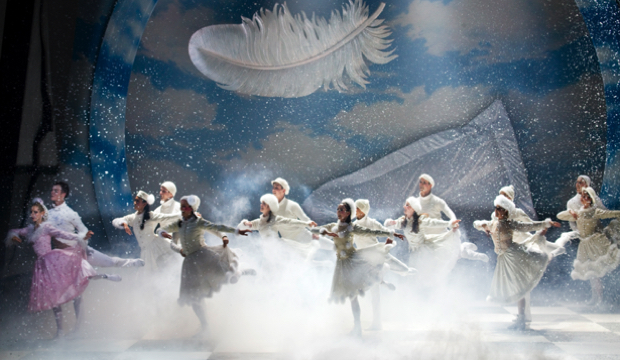 Matthew Bourne's Nutcracker! Photo: Simon Annand
Ice-skaters take the place of the original snowflakes; unfortunately for Clara, among them is the alluring Princess Sugar, who catches the Nutcracker’s eye and leads him away. 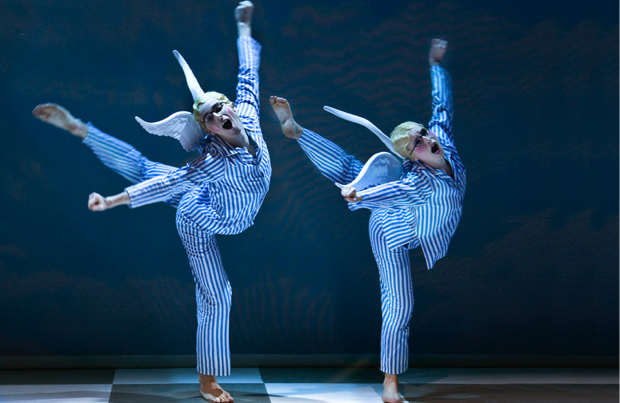 In place of the Spanish dance, we have The Allsorts Trio, the men in tight matador costumes, wiggling their hips and throwing knowing glances at the audience. The sinuous Arab dance becomes The Knickerbocker Glory (pictured top), the male dancer’s movements a parody of the original’s sexy mystery.

The Russian dance now turns into a hilariously vulgar turn by three helmeted Gobstoppers, with much hip-pumping action and muscle-flexing. All this is set against a big door framed by large bright red lips and guarded by the Humbug Bouncer, which eventually opens to reveal a gigantic multi-layered wedding cake.

And so to the final pas de deux between Princess Sugar and the Nutcracker, before inevitably the magic fades away and Clara wakes up in the orphanage again.

Don’t worry, though, there is a happy ending, but no spoilers here… suffice to say that Bourne and his collaborators have significantly spruced up, updated and re-choreographed this 1992 Nutcracker! and turned it into a transporting antidote to our anxious times.