Arthur Pita’s The Little Match Girl, based on the Hans Christian Andersen tale, is a dance-theatre work that has been thrilling audiences young and old since its London premiere in 2013; and it has became a staple of Sadler’s Wells’ Christmas ever since, performed in the venue's intimate Lilian Baylis studio.

Its central character is Fiammetta, the poor girl who has to sell matches to the rich burghers of her village so her destitute family can survive; but there are plenty of quirky cameos from a cast who clearly relish the task of doubling and tripling up to play the varied characters encountered by the Little Match Girl on a cold Christmas Eve in Italy.

Yann Seabra’s clever set is atmospheric; a miniature Italian village provides a picturesque fairytale backdrop to the proceedings. The scene where Fiammetta attempts to keep warm by a lone lit lamp post when a gentle flurry of snow begins to fall is particularly captivating. 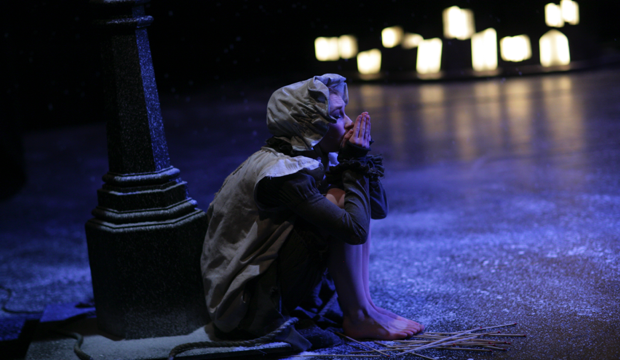 The Little Match Girl production image
There is the intensely dislikable, rich Donnarumma family, whose shrill voices and brash colours are as offensive as their brutal treatment of Fiammetta. The daughter, Angelica, is particularly feisty and devious, munching crassly on a turkey leg as a starving and cold Fiammetta watches on.

There are moments where the subject matter is dark and the characters are intimidating. The match boys, for example, are an energetic pair, who wield their large matches as if they were extensions of their fingers in a very Edwards Scissorshands-esque segment.

Arthur Pita has choreographed this section with power and athleticism. Fiammetta retreats, terrified; and it would be no surprise if some younger ones in the audience ones did too!

Of course, there is still much to enjoy, including the clever staging of the Donnarumma family’s home. It is lit from within, allowing the audience to observe their silhouettes as they eat, drink, sing and make merry totally oblivious of Fiammetta’s increasing desperation for a warm shelter.

The portrayal of the poor match girl’s gradual decline at the mercy of the elements sweeps the audience is swept along with every frozen step. Nor is it easy in a children’s production to depict the freezing to death of the heroine; but Pita does this beautifully. Fiammetta is sung to by her late grandmother as she falls slowly in her arms and eventually to the snow-covered floor, the mournful musical accompaniment from Frank Moon (performed live) enhancing the moment further.

After her death, though, Fiammetta is transported to a quirky and magical other world, where she finds herself dancing with an astronaut on the moon.

We are left with the image of Fiammetta atop the golden moon, smiling serenely as she blows out her last match - a delightful ending that gets an “ahh” of appreciation from the audience, by now totally captivated by this entrancing festive treat.