Manon is an innocent country girl, who’s nevertheless far too eager to enjoy the pleasures of corrupt 18th century Paris. On arrival in the big city, fresh from the convent, she falls for Joseph Caley’s poor, yet charming poet Des Grieux. She is later swayed by the allure of fur coats and expensive jewellery lavished upon her by the rich, and rather repulsive Monsieur GM.

Upon being reconciled with Des Grieux, the two attempt to escape together, but on Mr GM’s orders Manon is deported to Louisiana. Des Grieux chooses to follow her, but as they go deeper into the swamp, she meets her death by way of a fever, leaving Des Grieux bereft.

Alina Cojocaru, as Manon, offers a masterclass in the emotional complexities of the role. In Act I she shines as the fresh country girl – audiences would be wise to prepare for heartbreak. Later, her venality is exposed at the hands of Monsieur GM (another excellent character role for James Streeter); and the haunting desperation of her final moments makes for climactic and riveting viewing.

As the idealistic penniless poet Des Grieux, Joseph Caley is all warmth and charm; and in the more powerful later scenes his boundless commitment to Manon is performed forcefully. Cojocaru and Caley’s partnership is one that heats up as the evening progresses. The famous bedroom pas de deux of Act I occurs a little early for the chemistry to feel satisfying. Caley is technically secure but does not, at this stage, commit fully. 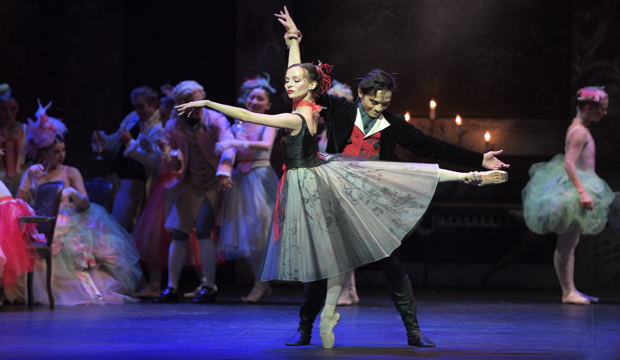 Khaniukova acts as a fulcrum for the crowded ensembles scenes and commands the stage with crisp and expressive dancing and a wonderful sense of mischief. Her duet with a drunken Lescaut (a spirited Jeffrey Cirio) has flawlessly timed laugh-out-loud moments executed with ease.

These busy scenes are enhanced by a skilled creative team. Mia Stensgaard’s sumptuous and atmospheric designs (originally created for Danish Royal Ballet) provide texture, from the simplicity of the inn of Act I, to the gaudy opulence of Madame’s gaming house, and the colourful costuming for the harlots who inhabit it. Mikki Kunttu’s dramatic lighting adds real menace, most notably in the disturbing section with the Louisiana Gaoler, who rapes Manon.

There are many other admirable nuggets of storytelling hiding beneath the surface. The bickering among the harlots and the interactions between courtesans and beggars are just small examples of the fine detail that has been drilled into this work to help convey the layered narrative.

There may be moments of humour, but the final engrossing scene, and the sight of Cojucaru’s fragile frame as Manon summons her very last reserves of life into an energy-sapping pas de deux, is what will linger in the mind for time to come. A truly absorbing piece of theatre.

Manon is a challenging tale to portray, and on this showing it illustrates the great depth of talent in ENB’s ranks, with the full company impressively rising to the varied challenges that MacMillan’s Manon poses.