It's the second of two tribute programmes in the ROH's Linbury Theatre, and one of the highlights of Dance Umbrella 2019.

Compagnie Amala Dianor’s Somewhere in the Middle of Infinity is a piece for three dancers, whose stories hail from elsewhere: Senegal (Dianor himself), Burkina Faso (Ladji Koné) and South Korea (Pansum Kim).

The dancers gather on a small lit triangle upstage right beside a computer monitor. They take their shoes off. Dianor presses a button. Awir Leon’s electronic music comes on. They take to the stage to dance. 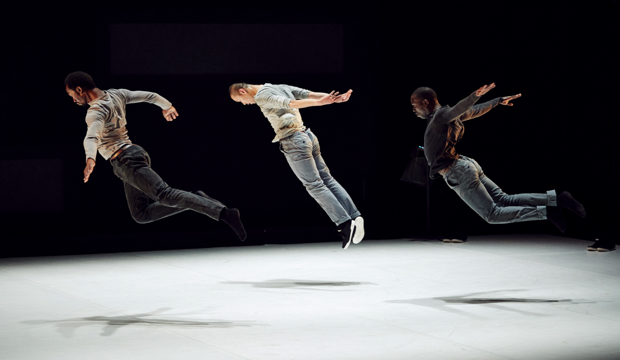 DU19 The Future Bursts In, Amala Dianor, Somewhere in the Middle of Infinity. Photo: Valérie Frossard

Initially the dance is slow, the movement fluid, the three clustering together in brief tableaux. Outstretched arms create soft lines, torsos bend sideways, each man intensely attentive to the others. Koné stands on his head, as he is to do at intervals throughout the piece, as if to indicate his world is upside down.

In highly inventive choreography rooted in migration and a sense of dislocation, Dianor mixes his hip-hop grounding with just a touch of traditional African dance – towards the end the dancers perform a series of stiff vertical jumps straight out of Masai tribal dancing – and fresh contemporary moves.

The seamless mix of styles is genuinely new and exhilarating, and bears witness to the freedom Cunningham’s daring exploration of movement bestowed on all dance that came after him.

For Four Walls is the reimagining by choreographers Petter Jacobsson and Thomas Caley of the eponymous 1944 Cunningham work which was lost. As well as delving into new forms of movement, seemingly free and improvised, but in reality tightly choreographed, For Four Walls is also a study in space and perceptions.

The stage is delimited by two mirrored walls at a skewed 90-degree angle, before which stands a phalanx of young dancers in practice clothes. As they gradually pull away from the mirror, they fall into a maelstrom of perpetual motion, often individually, sometimes acknowledging each other and engaging in the briefest of duets.

It’s a high-octane piece, with 24 dancers and their mirrored selves redefining space with every movement, their apparent freedom constrained by their physical surroundings and rigorous choreography.

You sense that Merce Cunningham himself would have approved.

The evening ends on a high with Cunningham’s own 1975 Sounddance. Created just after Cunningham’s return from spending nine weeks with the Paris Opera Ballet, Sounddance was intended as the antithesis of ballet’s uniformity, and is proof, if proof were needed, of Cunningham’s genius.

Dressed in informal soft grey leggings and peach-coloured long-sleeved tops, the dancers burst onto the stage in dribs and drabs from behind a richly ruched matt gold curtain. Their steps are recognisable from the classical canon: pirouettes, chainé turns, lifts; and yet, by being differently organised and infused with almost demonic energy, they subvert their very origins and create something genuinely new and still fresh over 40 years later.

We couldn’t recommend The Future Bursts In highly enough. 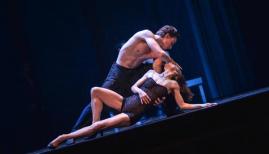 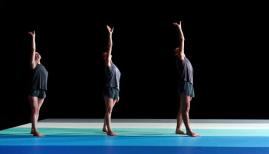 The Future Bursts In

Somewhere in the Middle of Infinity