Lebrun, Another Look at Memory review ★★★★★

For his first visit to the UK, staged by The Coronet Theatre, Lebrun picked Another Look at Memory, billed as a trip through 10 years of his choreography and performed by four dancers attuned to his ways: Maxime Aubert, Raphaël Cottin, Anne-Emmanuelle Deroo and Anne-Sophie Lancelin.

Always interested in 'the dialogue between dance and music', Lebrun chose for his musical score Philip Glass’s choral work Another Look at Harmony. Composed in the mid-70s, and scored for choir and electronic organ, this is minimalism at its most uncompromising: repeating the same short phrases over and over, with barely perceptive harmonic progression.

Three dancers in practice costumes, which seem to be de rigueur for much contemporary dance, line up on a stage divided into wide strips of dusty blue, light turquoise, white and grey, and respond to Glass’s score with impeccable precision and coordination. Arms rise slowly at precisely the same height, and are slowly lowered. One shoulder rises and falls, then the other. Torsos bend forward over soft knees.

So far, so promising. After a while they move forward with a determined, assertive stride and, now lined up downstage, repeat syncopated arm and torso movements, adding minute variations.

Eventually their lower bodies join in, the rhythmic structure of their movements remaining unchanged. One dancer peels off from the group and circles the stage, only to rejoin the collective dance. Another one follows. And another.

Three-quarters of the way into the piece a fourth dancer joins the group, which then dissolves, leaving him to perform an energetic solo, using the entire stage. All four join up for the finale.

There is no disputing Lebrun’s meticulous response to Glass’ music, but therein lie the work's various problems: as pumped through the Coronet’s slightly dodgy sound system,Another Look at Harmony is simply numbing and therefore alienating.

The dancers, entirely immersed in their own universe, never acknowledge the audience, as if they are dancing for themselves alone, closely guarding some secret which is definitely not for sharing.

It requires almost superhuman intent to remain focussed, engaged and interested. For all that it is short, this piece may well lose the interest of the audience before its hour was up. 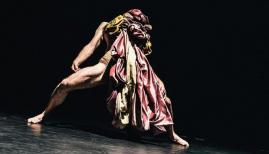 Another Look at Memory

Another look at harmony