What this Royal Ballet Triple Bill shows clearly, however, is the unbroken line that runs through dance, be it ballet or modern dance; and how works created at any point in the history of dance inform each other. 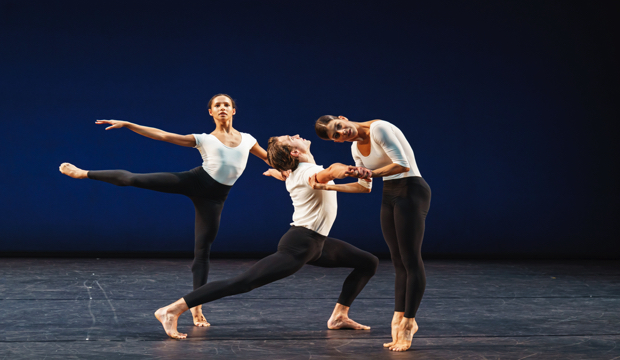 Francesca Hayward, Matthew Ball, Mayara Magri in Cross Currents. Photo: Bill Cooper ROH
It contains many of the elements that Cunningham was to develop throughout his long career: clean lines, tilted arabesques, suspended poses, the three dancers sometimes working in unison, sometimes in canon, but more often each performing his or her own choreography, following paths that constantly intersect.

All this to Conlon Nancarrow’s Studies for Player Piano Nos 11, 13 and 19, which was created quite separately from the choreography – Cunningham released dance from music as a structural base for movement.

On the surface, nothing could more different than Monotones II, the work of that supremely musical choreographer, Frederick Ashton, set to Erik Satie’s Trois Gymnopédies. 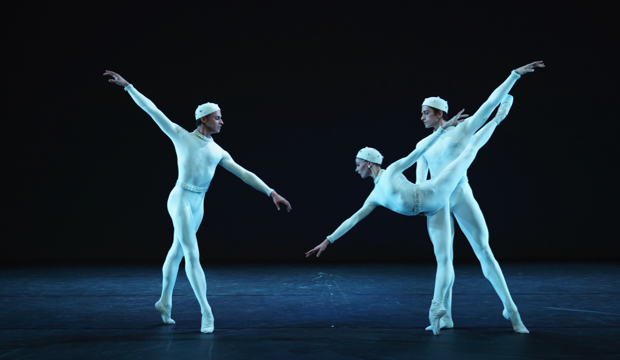 Nicol Edmonds, Melissa Hamilton and Reece Clarke in Monotones II. Photo: Bill Cooper ROH
And yet, as Ashton’s three white-clad dancers – on press night Melissa Hamilton, Reece Clarke and Nicol Edmonds – performed Ashton’s purest classical choreography, never losing touch with each other, it was possible to see how Cunningham and Ashton’s two works inform and mirror each other.

The final piece in the programme comes from Pam Tanowitz, who introduced herself to London ballet audiences with her complex, riveting Four Quartets set to live music and a reading of TS Eliot’s eponymous poems, presented earlier this year at the Barbican.

Commissioned by The Royal Ballet specifically for this Cunningham commemoration programme, Tanowitz’s Everyone Keeps Me (pictured, top) is a sunny composition for nine dancers. Its relaxed surface disguises split-second precision and contains a wealth of clever ideas, making it a work that requires more than one view to yield all its riches.

Tanowitz draws from all her sources alongside her own prolific imagination. She uses the classical technique of the Royal Ballet dancers, whose summery pastel costumes, designed by Fay Fullerton, flatter their every movement. She points towards Merce Cunningham, not least in divorcing movement from musical score, Ted Hearne’s Exposure performed live by a string quartet. And she makes the odd playful reference to Ashton’s Monotones II, for example when two men lift a woman above their heads, mirroring (even while distorting) one of Ashton’s weightless lifts.

Cross Currents/Monotones II/Everyone Keeps Me is a fascinating triple bill that through an ingenious juxtaposition of distinct works throws new light on what makes dance dance.