The Big Short Director Adam McKay's political comedy-drama Vice includes Amy Adams and Steve Carell, as they take on the White House like never before

Vice film review 2 Vice film review Josiah Gogarty
If there was ever any temptation to question director Adam McKay’s intentions with his audacious Dick Cheney biopic, Vice, a simultaneously provocative and defensive surtitle at the beginning of the film quells lukewarm scepticism: ‘we did our fucking best’, it reads.

Dick Cheney served as the 46th vice president of the United States from 2001 to 2009. The Republican politician is portrayed by Christian Bale (heavily transformed under prosthetic makeup and 40 pounds of extra body weight) in Vice, who thanked Satan for inspiring him in his Golden Globes acceptance speech. Cheney played a key part in the instigation of the Global War on Terrorism under the presidency of George W. Bush, and became the most powerful vice president of all time.

Vice is the first film to focus so closely on Cheney, but this is no ordinary or celebratory biopic. Everything from the title cards to the direct addresses imbue the film with an acerbic tone. This is a big-budget Hollywood blockbuster, directed by the filmmaker who made The Big Short in 2015 (a handsome awards contender, which also focused on angry men responsible for societal meltdown). McKay returns with a punishing satire about a man who did everything in his power to, well, gain even more power. 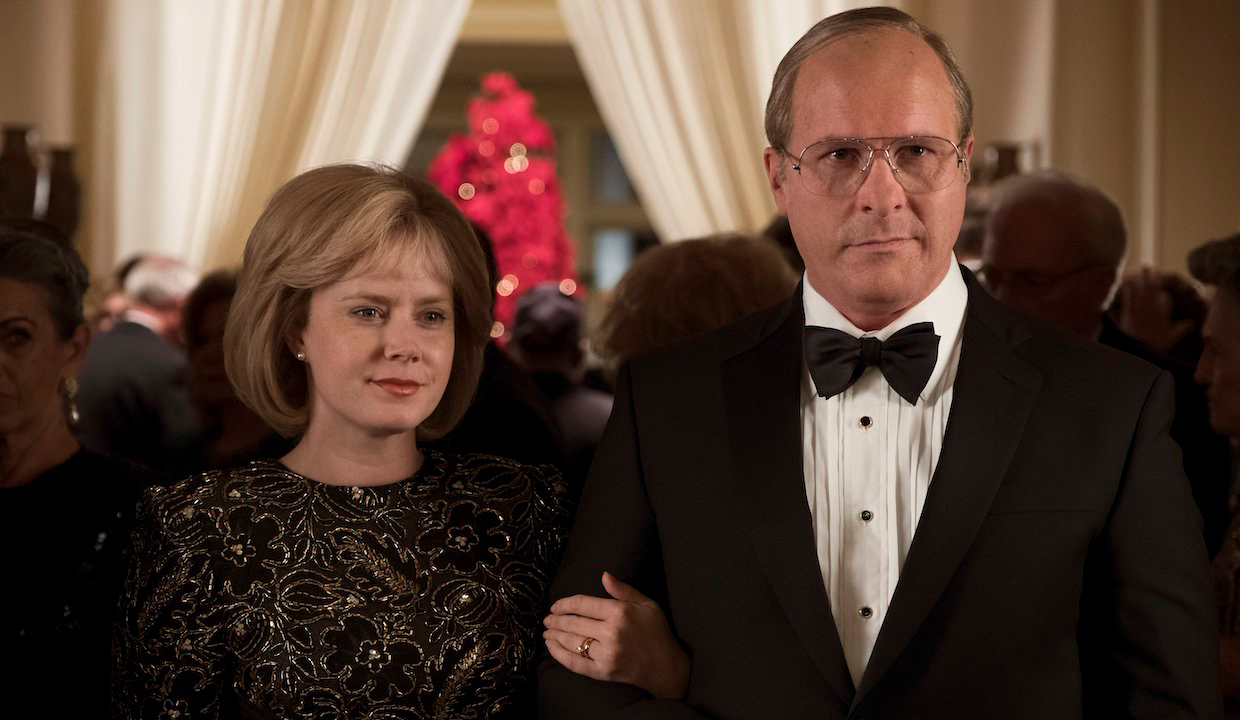 It’s an abrasive and indicting portrait, which does extremely little to redeem any of Cheney’s decisions. It then raises the question as to why so much time, technique and talent would be afforded to such a maligned subject. McKay directs with an insistent hand, creating a frustrating mishmash of personal and historical politics across the sheer breadth of stylistic quirks he plays with.

A voiceover (courtesy of the ever affable Jesse Plemons) guides the story through its near-unbelievable chain of events, without holding back on any tangential remarks about Cheney’s character, or the people around him. Allegedly Cheney was (and remains, as he’s very much still alive) notoriously secretive.

So, McKay has filled the gaps with camera tricks and caricatural humour; at once patronising an audience unfamiliar with the political landscape across ‘You remember him!’ nudges and freeze-frames that look like a PowerPoint presentation, while drawing his own fiery condemnation of the violent and unapologetic response to the 9/11 attacks.

Politics and pop culture have been intertwined for decades, creating an aura of fascination around the key figures of administrative empires that focuses on their entertainment value. Vice shouts in your face about the people who, according to this film, were on the wrong side of history – but it doesn’t give a platform to anyone else.

Outstandingly serious performances from Bale, opposite Amy Adams as Cheney’s wife Lynn, Sam Rockwell as president Bush and Steve Carell as Cheney’s first mentor, Donald Rumsfeld, give the film serious weight. But it’s a weight that holds your hand and squeezes it until the blood stops pumping, and you forget how you were supposed to learn anything in the first place.

Vice fights with so much vitriol that no one in this fiery fiasco is safe.