The true story of a 90-year-old drug runner, Eric, is played by Clint Eastwood. The Mule marks his latest acting and directing project – with mixed results

The Mule film review 3 The Mule film review Ella Kemp
Earl Stone isn’t where he’s supposed to be. Over the years, his wife and family have been disappointed to find him missing from birthdays, anniversaries and weddings, although this time, the circumstances are a little different. This time, Earl is late to drop off an important package – missing with him are over 200 pounds of cocaine, and panicking at his absence are the cartel and the DEA.

Six years after his last time in front of the camera, Clint Eastwood plays Earl, and also directs the true story of how a 90-year-old horticulturist became the number one drug runner for the Mexican cartel.

Still maintaining control as director and producer, Eastwood’s portrayal of Earl is a little outside of the actor’s usual range. Bumbling and almost adorable, Earl is repeatedly complimented on his impression of Jimmy Stewart. Never short an American hero, Eastwood’s films revel in patriotism and heart, and The Mule is no exception. Given the opportunity to win back favour with his family, Earl’s descension into greed echoes Jordan Belfort in The Wolf of Wall Street, albeit on a far less ridiculous level and almost in slow motion.

There’s always another friend or family member who could use a hand financially, and Earl’s pay check keeps rising as his unparalleled success begins to garner respect. Past the character’s toned down 'lack of filter”, Eastwood’s performance is joyously sympathetic – gone are the squinting eyes and scratchy growl of the Man with No Name, Eastwood’s iconic poncho-wearing cowboy. As Earl winds down his window and settles into his comfortable black leather seating, it’s difficult to suppress the urge to join him in a chorus of ‘Ain’t that a kick in the head’. 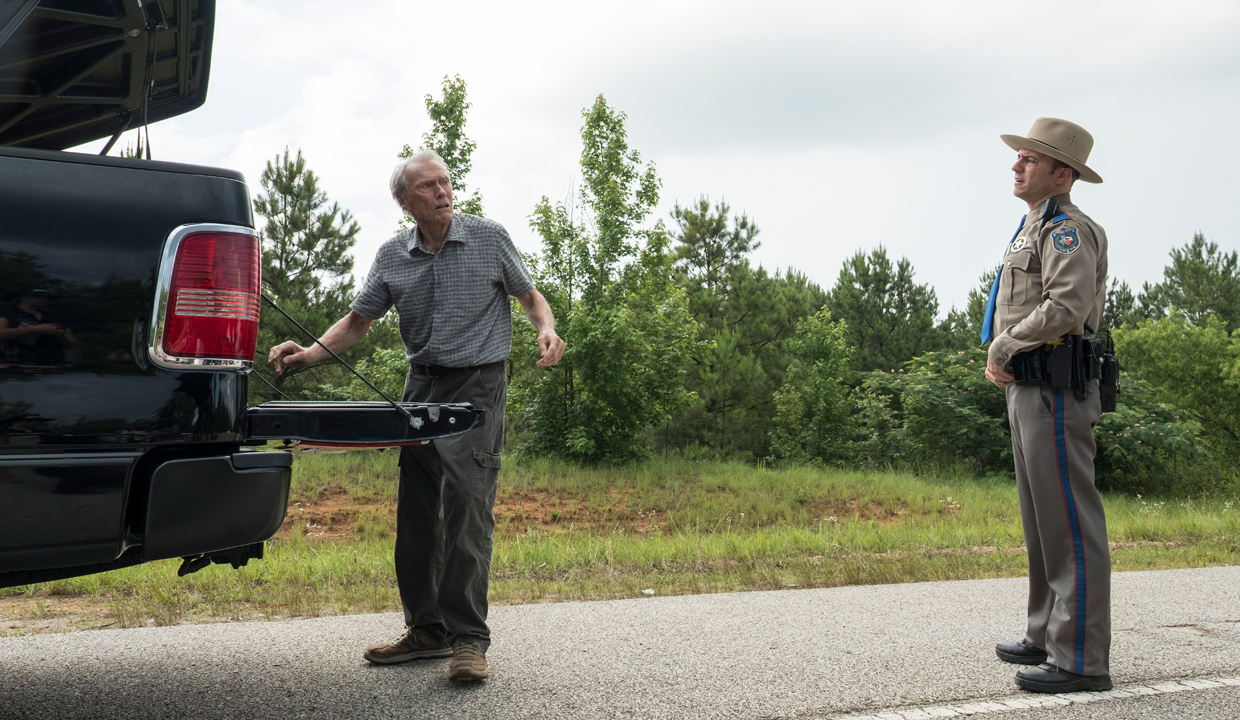 The Mule is imbued with heart, but it lacks drive

As director, Eastwood’s pointed focus on Earl leaves much to be desired in other areas. Opportunities to develop smaller characters are just missed or completely ignored, leaving Bradley Cooper’s DEA Agent Colin Bates and Ignacio Serrichio’s cartel bigwig Julio to dot around in the background, contributing nothing other than plot development.

Expositional and overbearing dialogue kills moments of genuine emotion, especially between Earl and his wife Mary, played on autopilot by a disappointing Diane Wiest. Worse is the fact that Eastwood struggles to find a point to this tale, resorting to condescending platitudes in an effort to justify the film. The Mule is undoubtedly imbued with heart, but it lacks drive.

Of the movies in Eastwood’s oeuvre as a director, now numbering 37 in total, 10 of the last 12 have been based on true events. A trend starts to appear in those which focus on an individual – the straightforward biopics, including American Sniper, Invictus, and Sully. But in telling a story about a person, details about the societal landscape become smudged, reality sacrificed in favour of stereotypical Hollywood cliché. These films lack the emotive writing of Eastwood’s earlier career collaborators, such as Paul Haggis or David Webb Peoples.

Eastwood’s films fail to do justice to the totality of life of his subjects. Just like its predecessors, The Mule is enjoyable to watch, and immediately forgettable. It is an interesting anecdote that need never have been made into a $50 million film, but to see Clint Eastwood impersonating Jimmy Stewart, perhaps that’s what it’s worth.