Good and silly comedies for adults are rarer since the glory days of Monty Python, as if off-the-wall absurdity is only reserved for U-rated movies.

But in Jojo Rabbit, the comedy writer-director-actor Taika Waititi — fresh from his Thor: Ragnarok success — has never-ending, childish fun in the morbid setting of Nazi Germany. Like Python, Waititi takes a serious topic and makes it silly, while still acknowledging the tragedy of the time and never upsetting its difficult balance.

Not only is Jojo Rabbit a comedy with Nazis, but its tiny, tween hero Jojo trains in the Hitler Youth — hoping to, one day, fight on the front lines. Oh, and he has an imaginary friend in the form of the Führer, cartoonishly played by Waititi himself. 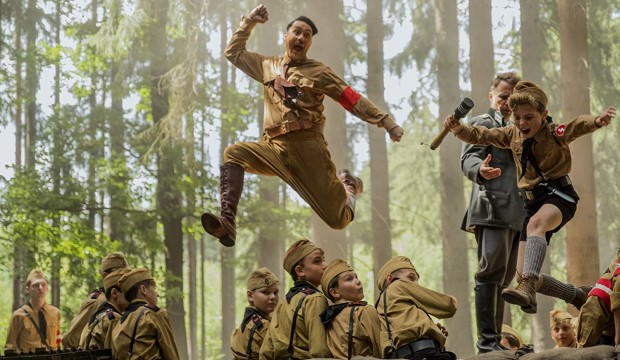 Jojo Rabbit: a comedy a ten-year-old Hitler Youth and his imaginary friend, the Führer

This little, anxious ten-year-old and his Adolf illusion have great chemistry together (a strange sentence to read back). Imaginary Adolf’s gags can get a bit samey — reverting to the same puerile mannerisms, satirising the dictator’s temperament — but they still land every time.

Playing Jojo, newcomer Roman Griffith Davis delivers one of the best child performances of the year. He manages to make this member of the Hitler Youth seem likeable, while carrying aggravated inner turmoil embodied by his own personal Adolf.

The opening scenes see the pair in a Hitler Youth camp, which bears a lot of resemblance to a traditional American scouting group. The troop in this case is run by Captain K, played by a drunkenly brilliant Sam Rockwell, who drops plenty of despondently funny comments about the Nazi regime. 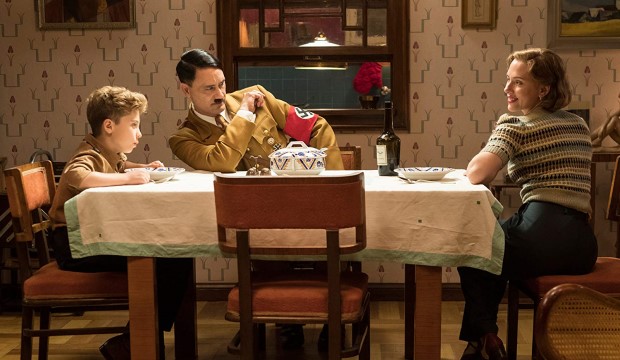 It would've been nice to have more from Scarlett Johansson as Jojo's mother, Rosie

Further along in the film, Jojo discovers that a Jewish girl, Elsa, is living in the loft of his house; provided refuge by Jojo’s mother Rosie (Scarlett Johansson). Thomasin McKenzie, playing Elsa, rises out of her poignant role in last year’s Leave No Trace and secures a furiously confident presence here. Elsa indulges Jojo’s uncomfortably delusional ideas about Jews by amusing, but also defending, herself. A baffling but endearing friendship grows between them, raising the film’s charm: it’s so easy to love these characters.

It would've been nice to have more from Jojo’s clearly anti-Nazi mother, mostly absent from the house, who provides the film’s few poignant punches. In one scene, she turns her son’s head to look at a hanging in the town square. It’s these breathless moments where Waititi forces the camera, albeit briefly, towards the horrors of the time.

The director seems to make a statement with Jojo Rabbit: yes, let’s laugh at these supremacists, let’s belittle their legacy and trample their ideology. But, in the same chuckled breath, the tragedies of the time are inescapable; they can’t be ignored. It’s a rare and risky balance with which Waititi, unlike many similar filmmakers, engenders a strange little triumph.

Reviewed at the 2019 London Film Festival. Jojo Rabbit will be released in cinemas on 1 January 2020.