Oskouei’s documentary is set entirely behind the bars of an unnamed girls’ juvenile detention facility in Tehran, not exactly a holy place. Another mention of God in Starless Dreams comes in the lyrics to a song being played by one of the inmates: ‘I’m angry with you, God’. The incarcerated adolescents have a lot to be angry about – they have a clear understanding of how their situations can be directly traced to their upbringings in squalor and violence. There’s no contrition here, just regret, rage, and profound sadness.

The film’s success is in its portraiture. Like many of the best recent documentaries, there’s no use of talking heads or archive footage, minimal voice-over, and little directorial interference: it’s just carefully put-together footage of its subjects. As a result, the girls in Starless Dreams emerge – even over the brief 76-minute running time ­– as colourful individuals, resourceful and funny, caught in painful lives. 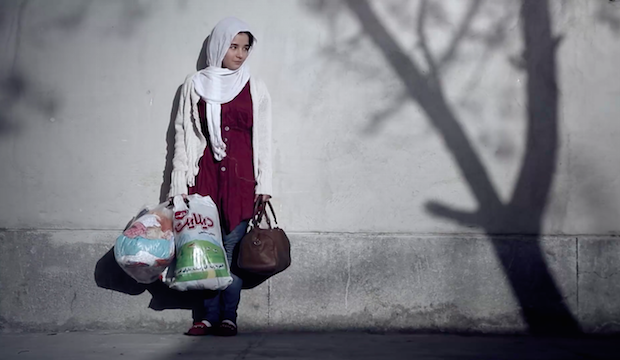 An inmate waits to be picked up following her release

Talking matter-of-factly about drug-dealing and -addiction, about weapon-carrying charges and premeditated murder, the inmates – all teenagers, some alarmingly young in appearance – can switch suddenly between despair and bravado, between keening tears and wicked laughter. It is by showing both extremes (sardonic and tough one moment, heartbroken the next) that Oskouei both keeps his viewpoint balanced and generates empathy.

Starless Dreams is, ultimately, too short. It feels like only an introduction to its vivid characters. But the handful of moments and images it gives us are memorable and rich: the group of headscarf-wearing girls comparing mad family/life-as-a-junkie stories while plaiting the blonde hair of a Caucasian doll; an inmate’s translated Tintin comics stashed in the slats of the bunk above her; the communal washing of an inmate’s infant child; an Imam asking the girls’ opinions on human rights and being inundated with apoplectic questions about judicial gender imbalance.

A quick, uncomfortable watch with some great real-life (anti-) heroines, Starless Dreams is a sincere and affecting documentation of another society’s outcasts.