Gimme Danger, the Iggy and the Stooges documentary, is one of two Jim Jarmusch films out this month, with Paterson being released next week

Gimme Danger film review 3 Gimme Danger film review Matthew Robinson
In this documentary on the proto-punk band The Stooges – which charts their rapid rise in the ‘60s, equally rapid demise in the ‘70s, and their recent unlikely ‘reunification’ (as frontman Iggy Pop has it) in this century – alt-director Jim Jarmusch offers an endearing, witty, but overall conventional portrait of one of music history’s most unconventional groups.

The film opens with a clip from one of The Stooges’ concerts in the ‘70s, when the band was teetering on the edge of collapse, which ends with Iggy Pop descending into the audience in a half-hearted stage-dive, disappearing under the crowd. This is a fitting image of what brought the band its fame and premature decline: their wild, primitive, messy on- and offstage antics; an affection for the ‘theatrics of the moment’, as one band says.

Jarmusch, burdened with the task of recording the band’s success for posterity and not just for ‘the moment’, goes about cleaning up the group’s act. He gives us traditional talking-heads interviews with the band members and managers. He illustrates anecdotes with photographs and clever animations sequences, splicing in footage from the era’s film and television. He helps unearth the band’s far-reaching and sometimes far-fetched points of inspiration—the black musicians from the Chicago blues and soul scene, the ultra-experimental classical composers at the University of Michigan, bizarre post-WWII children’s entertainment shows.

All of this to say, The Stooges were perhaps a little more self-aware than they seemed; there was (some) method to the madness. 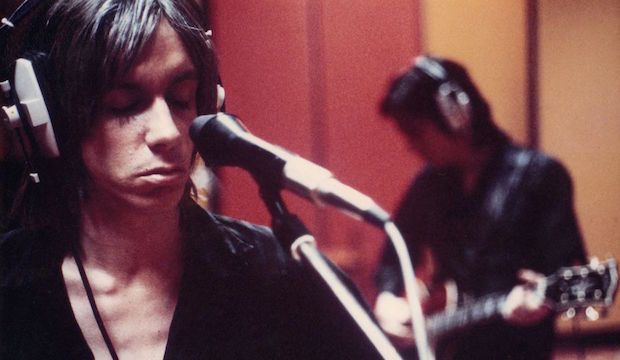 Iggy Pop in the studio

However, in all this effort to win over the audience in the usual ways, the documentary sometimes preaches to the choir. There are virtually no testimonials from anyone who didn’t work in, work for, or give birth to the band. The only evidence we are offered of the group’s influence on the future of rock is a stream of album covers from the ‘80s and ‘90s.

In this way, the documentary neither fully backs up its opening (over)statement, that The Stooges are ‘the greatest rock and roll band in history’; nor does it, in its tidiness, underline the basis of the band’s ‘rock and roll’ status – a wilful and consummate ‘lack of professionalism’, as early advocate and manager Danny Fields (under)states in the film.

But perhaps sticking to the middle ground here is fine, maybe even necessary. “I felt the group deserved to be the subject of a film by somebody who actually made films,” Iggy Pop said in an interview with Rolling Stone last month. Well, definitely, it took a proper filmmaker to draw a line around and help define an unhinged band and even more off-the-wall frontman who defied all boundaries.