Based on a true story and starring Viggo Mortensen and Mahershala Ali, Green Book has officially won Best Picture at the 2019 Oscars

It’s important to understand two things in Green Book: racism is bad, and friendship is good. Peter Farrelly (one half of the directing duo behind Dumb and Dumber) tells the story of Don Shirley and Tony Lip.

The Jamaican-American classical pianist and New York bouncer form an unlikely friendship as they drive across the Deep South in the name of music, in spite of Jim Crow era discrimination. Co-written by Tony's son, Nick Vallelonga, the film prides itself as being 'inspired by a true friendship' – although the facts have since been disputed.

There’s a lot at stake for Tony Lip (Viggo Mortensen) as he turns up for a job interview at Carnegie Hall. A charmer with 'an innate ability to handle trouble', his next gig offers more than his ego can stand at first. Dr Don Shirley (Mahershala Ali) is a renowned, solitary musician who needs a right-hand man for his upcoming tour. He needs a driver, but not just any driver – preparing for the inevitable hostility of the itinerary, Shirley’s chauffeur will need to provide security, organisation and, of course, friendship.

The titular red herring is the Negro Motorist Green Book, a travel guidebook offering tips on how to navigate racism on the road; surviving whites-only garages and service refusals across the US. Sitting safely on the dashboard, the book cinches the real-life weight the film tries to convey. The threat rears its head, but this rarely forces the film into despair, or rob the viewer of any feeling of eventual relief. The book lies inanimate, within view but rarely jeopardising the good fun of a road trip. 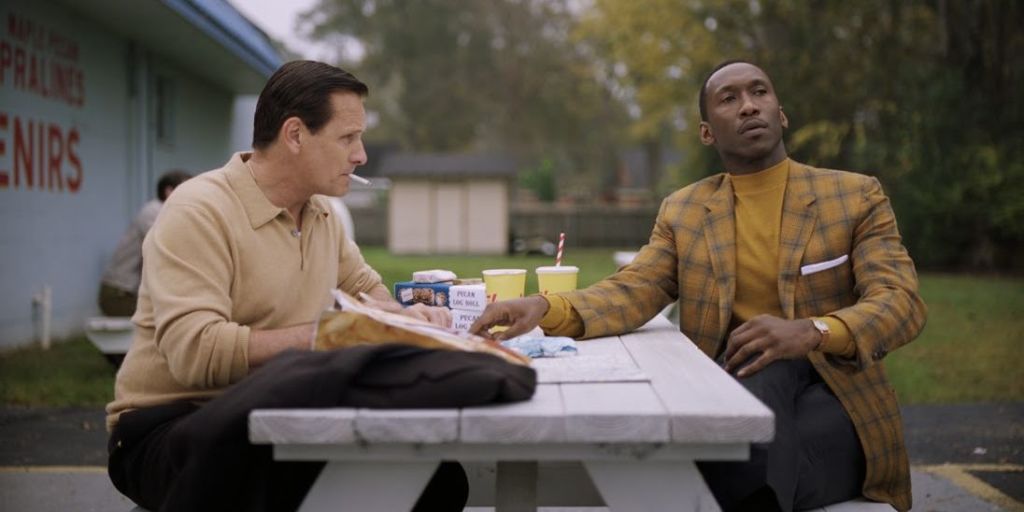 Tony drives Don with a puffed-out sense of pride and unabashed hedonism. Mortensen fills a square frame with a round belly and a face that glistens with the grease of fried chicken. He makes sense within a Farrelly Cinematic Universe of gross-out humour, which celebrates topics that could be considered of poor taste, or overly vulgar. The actor favours caricatural Italian-American extravagance mixed with brash rudeness, over any form of really subtle satire.

Complex insecurities define Don Shirley. He is judged by the colour of his skin, but also reckons with his sexuality and drinking issues in secret. The careful mannerisms that define his elegance also enhance his credibility as a performer, and a man dealing with great pain. It’s surprising that the film remains so light, always lifting sorrow as soon as it seems to lose sight of the heartwarming happy ending.

Facts don’t lie, the world loves Green Book: after taking home the People’s Choice Award in Toronto, it was met with praise as the Surprise Film at London Film Festival and is now storming awards season. Exploring a moment in history through the prism of an imperfect America and a likeable pair of pals who see friendship blindly, there’s enough to give food for thought without leaving an aftertaste of guilt for anyone.

The film could potentially break dangerous ground in the wrong hands. Over worried whispers of a 'white saviour' narrative, Farrelly focuses more on how to break a smile than disrupt the status quo. Simple comedy doesn’t hinder the story’s likeability, but it doesn’t allow a more powerful lesson to shine through either. Effective in its aim but hardly revolutionary in its concept, Green Book follows a guidebook with the best intentions, and reaches its destination just in time for dinner.