Shot in Soho, The Photographers' Gallery

6 CW readers are interested
Shot in Soho, The Photographers' Gallery Shot in Soho, The Photographers' Gallery Emily Spicer
Boxed in by Oxford Street to the north and Shaftsbury Avenue to the south, Charing Cross Road to the east and Regent’s Street to the west, Soho forms a square mile in London's centre that has become synonymous with entertainment and pleasure seeking, with bars and night clubs, theatres and sex shops. The Photographers’ Gallery exhibition explores this cultural hub of rebellion and counter culture.

Beginning in the swinging sixties, Shot in Soho examines the area’s influence as a movie-set, fashion hub and cabaret centre. It was also an important site for some of music's biggest names. In the 1960s, the Marquee Club on Wardour Street saw early performances from the Rolling Stones, The Who, Jimi Hendrix, Davis Bowie and Led Zeppelin. But these musicians were not only attracted to Soho's clubs; they also sought out Carnaby Street, where the edgy clothes shops proved irresistible. 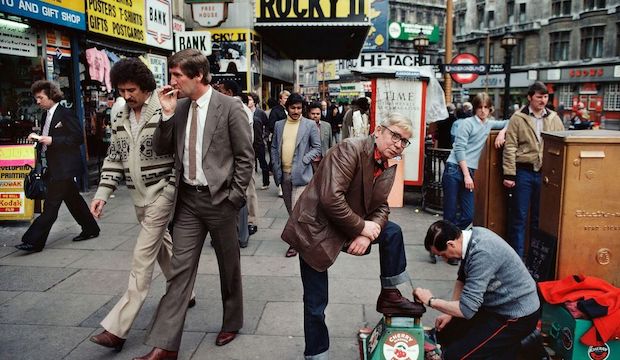 Shot in Soho includes images by renowned photographer William Klein, who captured a candid portrait of the area in the 1980s. It also displays Soho’s darker underbelly through the work of Kevin Brodie, who followed police teams at night. We are then brought up to the present day with Daragh Soden's photo essay, exploring Soho's reputation for performance and the pursuit of love. This show, in short, is a love letter to London's heart of cool, but there are melancholy overtones, too.

Concerns over Soho's development with the coming Crossrail casts a shadow over the future of this iconic region. Slowly, the infamous burlesque joints and more raucous bars are being closed down to make way for new flats and tapas bars. Are we now at the tail end of Soho's golden era? Will this square mile become nothing more a bland and sanitised centre, where the old neon signs that once adorned the lively streets, provide ironic interior decoration for shiny new penthouses? We will have to wait and see. In the mean time, we can revel in its recent past.