Sculpture in the City returns to the Square Mile for its 9th edition, brightening up that part of London usually associated with bankers and glass-fronted buildings. This year, 17 artworks by 21 artists from the UK and abroad have been installed amongst the City's modern architecture.

Salvatore Arancio’s It Was Only a Matter of Time Before We Found the Pyramid and Forced it Open (on display at 1 Great St Helen’s) takes the form of rainbow coloured columns, rising up from amorphous black bases, which resemble cooled lava. It is as though these shiny, bright forms are being born from the earth of some alien planet, having been forged deep within an other-worldly crust. Amazingly, Arancio created these sculptures while under the influence of hypnosis. 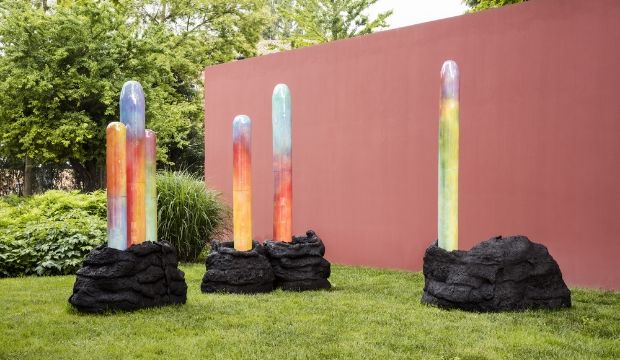 Salvatore Arancio, It Was Only a Matter of Time Before We Found the Pyramid and Forced it Open, (2017), courtesy of the artist and Federica Schiavo Gallery, photography by Andrea Rossetti

Nina Saunders is an artist who likes to play with interiors and soft furnishings. She will be exhibiting her work Abstract Mass on Undershaft (near the Gherkin), a sculpture that takes the form of two armchairs cast in concrete. The work toys with our idea of comfort and scale, backdropped by one of the City's largest buildings.

There are several neon works lighting up the Square Mile this year. Patrick Tuttofuoco’s The Source is modelled after the artist’s hands and hangs in the opulent Leadenhall Market. Also in the market Shaun C. Badham’s poignantly named I’M STAYING (2014), remains in place from last year’s edition. These luminous works powerfully contrast these Victorian surroundings, drawing attention to the City as a place steeped in history as well as a symbol of modernity. 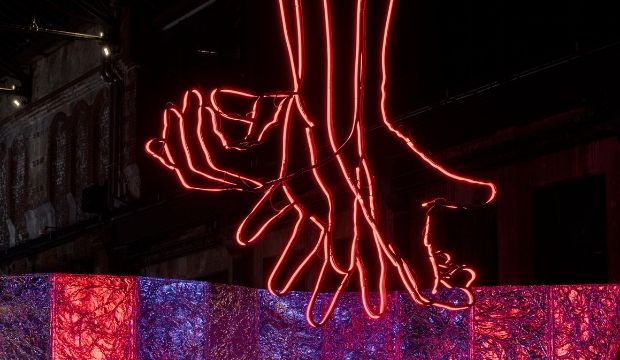 Nathan Coley’s neon work The Same For Everyone is on display near the Gherkin. Coley brings together words and locations to produce new meanings, compelling the viewer to consider their surroundings in a new light. Head on a three minute walk west to Heneage Lane to see Clare Jarrett’s Sari Garden, a work made up of lengths of Indian fabric, hung between Victorian lampposts. And on the newly pedestrianised space below the skyscraper at 70 St Mary Axe, Elisa Artesero’s neon poem The Garden of Floating Words (2017) sprouts out of newly-designed flower beds.

There's a strong digital presence in the programme this year, and without a doubt, the most ambitious and visually arresting of the works on display is Jennifer Steinkamp's Botanic (2019), a video installation at 120 Fenchurch Street which shows an amorphous digital garden blooming on the largest LED ceiling-mounted screen in Europe.

Figurative sculpture is also very much alive and kicking in this year's programme. Kevin Francis Gray's Reclining Nude I and Reza Aramesh's Site of the Fall - study of the renaissance garden: Action 180: At 9:15 am Sunday May 1967 both echo classical and Renaissance sculptural traditions with their marble forms. Gray's work is wonderfully at home lying in repose in the bucolic setting of St Botolph-without-Bishopsgate Churchyard, and Aramesh's David-like, hooded figure dramatically stands out against an austere backdrop of glass buildings.

With such a great variety of different media, scale and forms, Sculpture in the City demands a rereading of our urban landscape and asks us to consider the possibilities of how we can engage with public space.

There are a number of events accompanying Sculpture in the City this year, including Nocturnal Creatures, a one-off arts festival launched in partnership with the White Chapel Gallery and a walk led by artist Guillaume Vandame, which encourages people to join in, dressed in colours associated with the LGBTQIA+ community.

There is also be a series of ticketed public tours available. Please click here for more information. 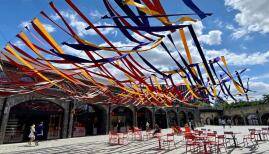 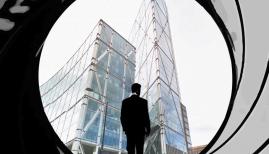