The renaissance polymath was described by contemporaries as charming, well dressed, gregarious and well groomed, traits that served him well. One early biographer reports that the ruling family of Florence (the Medicis) sent him as an envoy to secure peace with their rivals in Milan, armed with a silver lyre in the shape of a horse’s head. Da Vinci also knew the infamous Machiavelli (together they plotted to divert the river Arno) and produced fits of jealously in rival Michelangelo. His achievements were many, but it is his art that da Vinci is best known for and his exquisite drawings, now on show at the Queen’s Gallery Buckingham Palace, tell the story of a man of extraordinary abilities.

This exhibition charts da Vinci’s remarkable life from the prodigious early drawings, right up to the tormented images he made in his final days after suffering from a stroke. Every page is full of wonders, teeming with studies in proportion and investigations into the inner workings of the human body. Notable examples included a cross section of a couple having sex and a drawing of a foetus in the womb, believed to have been made from a dissection carried out by the artist himself. 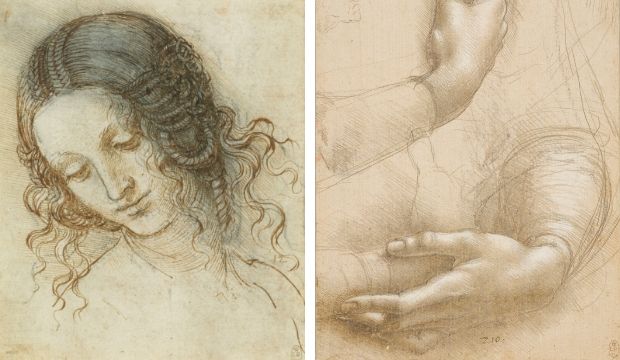 A page of domestic cats, transforming into lions and dragons speaks of da Vinci’s playfulness. He certainly had a mischievous side and also loved to draw grotesques and poke fun at the elderly and vain. Even studies of a wrinkled sleeve, done for his painting The Madonna and Child with St Anne and a Lamb (1508–19) are a delicate wonder. The gossamer fabric, rendered in chalk, seems spun from the mists that shroud the mountains behind the holy family. No reproduction can do justice to the original drawings.

After suffering a stroke towards the end of his life, da Vinci purportedly lost the use of his right arm and eventually became bedridden. But, as a left-hander, he was still able to draw and during these difficult later years became obsessed with apocalyptic destruction, writing long descriptions of a deluge that would lay ruin to landscapes and even topple mountains. He drew scenes in which curling water sweeps away cities and skeletons rise up from their graves. These images are the product of an angst-ridden mind. As da Vinci's own artworks started to crumble and fade, and his body started to give up on him, he must have felt that nothing was permanent.

The last portrait in the exhibition, made in the year of his death, is that of an old man with a pendulous nose and long hair. It is not a self-portrait, but perhaps a visualisation of how he felt – ill, tired and decrepit. And his hand is unsure. The lines of the profile are drawn and redrawn. Gone are the confident renderings of his youth, of muscular young men and proud horses.

This exhibition so beautifully tells the story da Vinci, his exuberant youth, his insatiable appetite for life, his genius and his despair. It would be easy to wile away a couple of hours in the company of these drawings, but there will be crowds. If you want a more intimate audience with one of the most famous men who ever lived, time your visit wisely.

While conducting research for the exhibition at the Queen's Gallery, Martin Clayton, Head of Prints and Drawings at the Royal Collection Trust, identified a sketch by one of da Vinci's assistants as a portrait of the great man himself, made shortly before his death in 1519. It sits on a page of studies that da Vinci made of a horse's leg and is only the second contemporary portrait of him known to be in existence. It details his long nose and trademark beard – an attribute he was renowned for at the time.

The second portrait was made by another of da Vinci's assistants, one Francesco Melzi, but was probably finished by the master himself, such is the competent handling of the red chalk used to make it. Da Vinci left thousands of drawings to Melzi after his death, who spent the next 50 years caring for them. Both portraits will go on display at the Queen's Gallery, providing visitors with the opportunity to compare the two quite different versions. 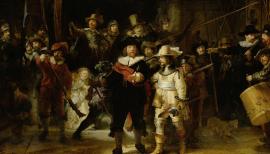 Where to celebrate this year's art anniversaries in Europe