3 CW readers are interested
Library of exile, British Museum Library of exile, British Museum Emily Spicer
Edmund de Waal's temporary pavilion, Library of Exile, is coming to the British Museum. In March the installation, which debuted at the Venice Biennale as part of a larger work entitled psalm, will be placed in Room 2, accompanied by four vitrine works, containing examples of the artist's famous ceramics. The library consists of a structure housing almost 2000 books by exiled authors, going back to the Roman poet Ovid. Visitors are encouraged to sit and read the works and to consider writing – and its translation – as an act of migration.

The outer walls of structure have been coated with liquid porcelain and gold leaf, into which de Waal has inscribed the names of the great, lost libraries of the world, from the ancient library of Alexandria, to the Mosul University Library in Iraq, which was destroyed in the war. De Wall says of the project: 'The Library of Exile celebrates the cultures of migration and languages as diaspora. For it to continue its travels to London is wonderful.' 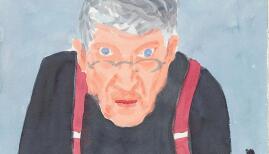