24 CW readers are interested
Lee Krasner: Living Colour, Barbican Art Gallery review 4 Lee Krasner: Living Colour, Barbican Art Gallery review Anna Scriven
At the Royal Academy in 2016 Lee Krasner’s work was shown alongside Jackson Pollock’s as part of an exhibition entitled Abstract Expressionism, but there was very little of it and she was presented as little more than the less successful wife of a brilliant painter. Now, only three years later, art institutions across the country have started to change their tune with a spate of exhibitions exploring the work of great female artists who have be ignored – or eclipsed – by their male counterparts.

In 1942 Krasner met Pollock, and by 1945 the two were married. They relocated from New York to a house in Springs, Long Island, where Krasner worked in the upstairs bedroom, making what she called her Little Images, while Pollock worked on his canvases in the barn. She then experimented with drawing but, in a fit of despondency, tore up all of her works, only returning to the scraps weeks later, to find that there were pieces that interested her. These she layered over older paintings to produce a series of bold collages, which were exhibited in 1955 and admired by the artist and critic Fairfield Porter.

Krasner’s work took on a new direction in the mid fifties with paintings reminiscent of Picasso’s Les Demoiselles d'Avignon or his Three Dancers, with their raw pinks and fractured forms that resemble tumbling limbs. She gave these works titles such as Birth, Embrace, and most chillingly of all, Prophesy. Her work took on this ‘disturbing’ quality, as she described it, just as Pollock’s drinking spiralled out of control. In August 1956, while on a visit to Paris, she received a telephone call to say that Pollock had crashed his car, killing himself, and another woman. His lover, Ruth Kligman, was also in the car, but she survived.

The next year Krasner took over Pollock’s studio in the barn at Springs. With additional space to work, she began to paint much larger, more expressive canvases. A series of brown paintings made at this time are displayed here. She created these at night while suffering from a spell of insomnia. They have a frenzied energy about them, with the paint splattered and dripped across the canvas in a way that is reminiscent of Pollock, as though his presence still haunted the studio.

In the early 1960s Krasner's work blossomed as she embraced primary colours with Henri Matisse in mind. Krasner was a great admirer of Matisse, who was a similarly experimental soul who favoured bright reds, yellows and blues. These are her most joyous canvases and the spacious Barbican galleries are the perfect place to display them. Here they are given room to breathe and are visible from multiple perspectives. 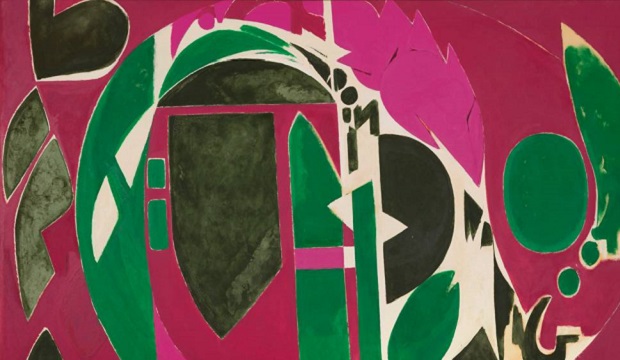 Krasner was not unknown in her lifetime. She had exhibitions at White Chapel Gallery in London, the Whitney Museum of American Art, Pace Gallery and the Museum of Fine Arts, Houston. This last exhibition, which opened on her 75th birthday, travelled to San Francisco, but sadly she died before it opened it opened at MoMA, New York, where she had so wanted to have a solo show.

Despite this success, Krasner has not yet been admitted into the canon of great artists, a list that is traditionally all male. But things are changing for her and for others like her, as a whole host of exhibitions in London are re-examining the works of female artists, some of whom are still alive to witness this change. And long may it continue.