6 CW readers are interested
Art Riot review Saatchi Gallery 4 Art Riot review Saatchi Gallery Catriona Graffius
‘Fear turns free people into a sticky mass of uncoordinated bodies’. Pyotr Pavlensky
A naked man prowls the streets of Moscow as a dog; film footage depicts women in neon balaclavas spitting out invectives against the Russian government; an artist cuts off his right ear in a tribute act to Van Gogh’s own act of insanity before pinning his scrotum to Red Square: this is Post-Soviet Actionism, and it’s taking over the ground floor of the Saatchi Gallery this November.

TRY CULTURE WHISPER
Receive free tickets & insider tips to unlock the best of London — direct to your inbox
Brutal yet enlightening, Art Riot: Post-Soviet Actionism is dedicated to the most provocative Post-Soviet protest art to surface in the past 25 years. Intended to shock, but much more than a string of gratuitous spectacles, the story of Russia’s protest art and actionism is alienating, gripping, and hard-hitting.

At its best, Art Riot: Post-Soviet Actionism interrogates the role of the artist, human rights and freedom of expression within Russia’s repressive political structures through slogans, video installations, photography and performance art by some of the most progressive political artists of our time. ‘Artist-animal’ Oleg Kiluk, recognized today as the most irreverent figure of the Moscow Actionism movement of the 1990s, Russian performance-art activist Pyotr Pavlensky, and the balaclava wearing neon-clad Russian activist group Pussy Riot stampede the show. It is a forceful reminder of the potency of performance art when turned against the political machine.

The 'political art' of Pyotr Pavlensky is by far the most striking in the exhibition. It grips the heart and mind. Seconds turn into minutes when staring at the artist's naked body ensconced in barbed wire in the sombre-lit second gallery. The raw brutality of the image quite literally makes the spine-tingle. The human body never looked so fragile, so vulnerable. Overwhelmed by feelings of awe, fear and threat, viewers shuffle uncomfortably around the darkened space.

Intensifying the solemn experience, in the second gallery we see projected snippets of conversation between Soviet officer, Pavel Yasman and Pavlensky. Following the artist’s arrest in 2015, Pavlensky was retained in custody and interrogated for days on end by Yasman. The conversation is strained and at times violent. The words entrance. The passion in Pavlensky's voice is palpable. 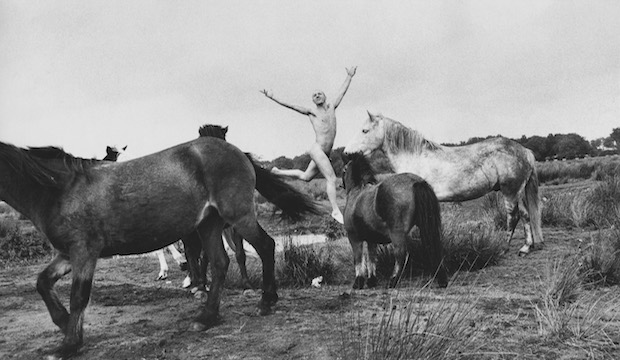 The power of their unauthorised protest performances – of which the most famous is their 2012 illegal performance in Moscow’s Cathedral of Christ the Saviour – is lost in the posters, and text panels scattered around the room recounting the act. The colourful monumental oils of the balaclava-clad women, however, are utterly intriguing. Their vengeful eyes stare at you with venomous passion.

The weighty palette, the washed-out background and the protruding lumps and bumps of oils evoke their bullish aggression. Trouble lurks behind the frame. The Pussy Riot gaze unsettles. These portraits possess a violent quality that harks back to their 'real-life' determination, and will to fight the system. 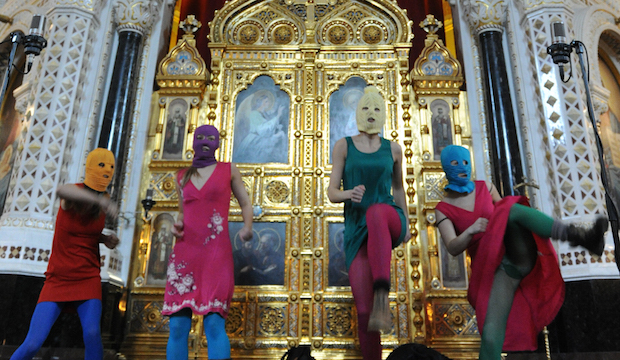 Being the centenary of the 1917 Russian Revolution, this year has witnessed a flood of events and exhibitions commemorating the beginning of the era-defining Soviet regime and its aftermath. We’ve definitely had no shortage of exposure to Russian art.

Institutions across London from the British Library to Tate Modern have taken on all things revolutionary. Is there anything left to discover?
Art Riot: Post Soviet Actionism proves that there is. 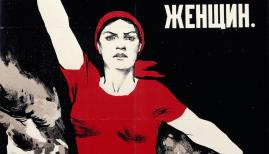 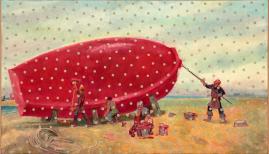