Melancholia, the Soviet Union and failed utopias - this Ilya and Emilia Kabakov exhibition is a majestic monument to the forgotten

The installation occupies a much larger space than seems feasible. On the walls hang fragments of autobiography and black and white photographs taken by Ilya’s uncle. At the centre of the maze, Ilya can be heard singing romance ballads from a lost childhood. Slowly but surely, we are sucked into what now seems a far-distant world. History here adopts a physical form. It's hair raising.

Labyrinth is a monument to struggle. Human struggle, yes, but, in particular, to the struggle of one particular woman. Her name was Bertha Urievna Soldukhina. She was Ilya’s mother. Her life unfolds before us – it's one filled with tragedy, hardship and poverty. 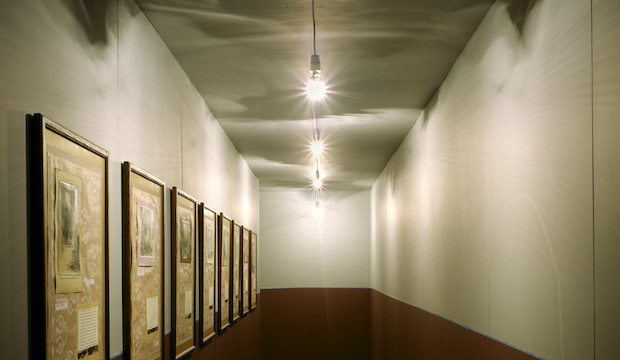 A few years before she died, Ilya persuaded his mother to write a memoir. Preserving her memory with Labyrinth, the excerpts of autobiography reveal Bertha's harrowing life-story. It’s a grim reminder of the millions of lives, dreams, hopes, friendships crushed by communism in Soviet Russia.

Husband and wife duo Ilya and Emilia Kabakov emerged from the wreckage of the USSR, and its birth and death informs every aspect of their work. They are Russia's best known contemporary artists.

Ilya Kabakov is world-renowned for his monumental installations – those currently installed at Tate Modern really make the current exhibition of his work worth visiting. Seeing themselves as pioneers of ‘total immersion’, the Kabakovs have created walk-in spaces that are uncanny carbon copies of Soviet offices or apartments that rose out of a dissatisfaction with the limits of the canvas, and the desire for the viewer to feel the art.

One of the most evocative installations is The Man Who Flew Into Space From His Apartment. Created in 1995, Ilya presents a fictional narrative that takes place in the confines of a communal apartment, very typical under the Soviet Union. Entirely papered in communist propaganda, the cramped room is shrine-like. 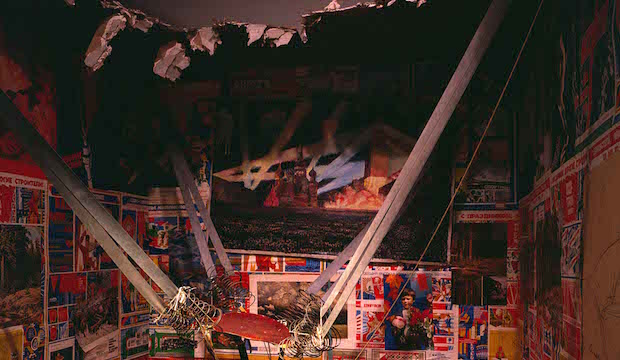 Ilya Kabakov, The Man Who Flew Into Space From His Apartment, 1985 © Ilya & Emilia Kabakov

Rather unusually, in the middle of the room, is a catapult swing that leads to a blast hole in the ceiling. It’s an inventively humorous way to escape an oppressive, everyday regime of conformity – if it was'nt so tragic. Drawing your eyes away form the intricate details of the room is a challenge. As the extent of the oppression sinks in, it's as though a canon ball thumps inside the stomach, the metaphorical become the literal within minutes.

But Ilya point-blank rejected conformity. Refusing to adopt the Soviet Union’s official style of Social Realism, he began life as a children's book illustrator. But over four decades – in secret at first – Ilya Kabakov has produced a wide range of paintings, drawings, installations, and theoretical texts that attack the state’s domination over the individual. Since 1992, when he married his wife Emilia, she has been his partner in art. Their works are loaded with meaning - as you strip one layer back another complex layer is revealed. While their late-works are more concept, they are just as thought provoking.

In the eighth room of the exhibition hang their late paintings. Here we see fragmentary images of parades and heroic, injured soldiers peek through the swathes of white (snow), alluding to a historical past, now deeply buried beneath a blank blanket of the present day.

The only way to understand the effects of living under the Soviet regime is to be placed inside it. And Tate Modern does a phenomenal job.

Get ready to be immersed in the USSR.