Inside The World Goes Pop exhibition there is a strange red monster growing out of the Tate gallery floor. Nicola L's Red Coat is a plastic cagoule designed to be worn by eleven people at once, hobbling along together come rain or shine. The fiercely inventive French artist might have made her name in 1967, inviting the public to poke an arm or a torso into her giant red creation, but she is far from the classic Pop Artist spinning out prints of Marilyn Monroe, Elvis Presley and Campbell's soup cans in '60s New York.
Stepping into this Tate Modern Pop Art show, it's clear that we're not in Warhol's Factory anymore. So while you might think you know everything there is to know about Pop and feel bored already, hold your horses because The World Goes Pop Tate 2015 exhibition is a vibrant new take on a familiar subject.
Curator Jessica Morgan turns our attention to an array of international artists from Latin America, Asia, Europe and the Middle East that seem even more 'Pop' than Claes Oldenburg, Roy Lichtenstein and Andy Warhol. It's Pop back to its rebellious roots, making it a must see art exhibition in London 2015.
However, despite the blockbuster fuss, The World Goes Pop feels more like a gentle fizz than a violent bang. It is hard going - lifted by playful individual works like a giant fly swatter and latex silhouettes draped over coat hangers, which bring a little of that ironic Pop magic to the South Bank this autumn. 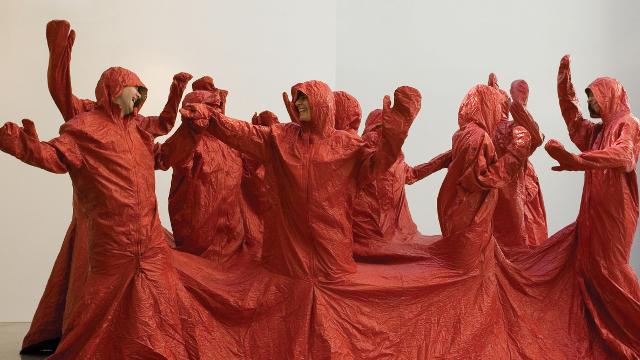 So what is Pop Art?
The Pop Art movement was fascinated with the wild consumerist culture that swept post-war America in the 1950s. Using low subject matter such as packaging, advertising, pop music and comic books, artists criticised the global mass market and effects of capitalism on society. Warhol summarised the Pop Art manifesto when he said, ‘in the future everybody will be world-famous for fifteen minutes'.
Tate & Pop Art
Step into the Tate galleries and a lolling tongue greets you: it feels like the Pop Art boys are back in town. Endlessly poking fun at American consumerism, even Picasso doesn't escape unscathed as Dora Maar's serious avant-garde face becomes a toothy grin. The vivid colours on every wall will make your head spin. In fact the entire show is theatrical and flamboyant, as if someone has given each artist a megaphone and they won't quit shouting.
In Henri Cueco's Large Protest (1969) the smell of revolution is in the air as fists pump and figures dart out of the ground. And there's violence at every turn: from Rafael Canogar's beaten man on the floor in Francoist Spain and oppression in militaristic Brazil to mouths sewn shut in Poland and a face off between Kennedy and Khrushchev during the Cold War by Sergio Lombardo. 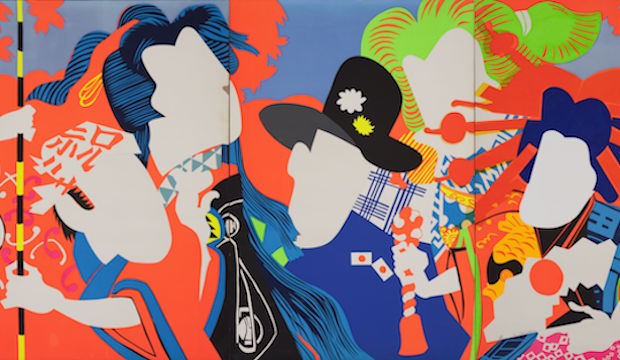 Highlights: Female Pop Artists & America
A real draw is the focus on female Pop Artists and the questions surrounding the female body and sexuality during the 1960s. Nicola L dazzles again with her Woman Sofa (1968), which gives Allen Jones' erotic furniture a run for its money. You'll even find Ruth Francken has taken human seating one step further with a man's body as a chair. Male sexual arrogance gets a take down which is engaging and fantastically well considered by these female trailblazers. Just take a look at Slovakian Jana Zelibská and Brazilian Anna Maria Maiolino's lurid sexual organs, and the female body parts which appear on children's building blocks, sinister machines and canvases to undermine female stereotypes with gusto.
There's also an excellent reassessment of the New York-centric Pop Art scene, as Icelandic artist Erró has Chinese workers invading the perfect American interior. Long gone are Marilyn and Elvis, instead it's all Colombian dining tables, Second World War search lights and Vietnamese jungle. 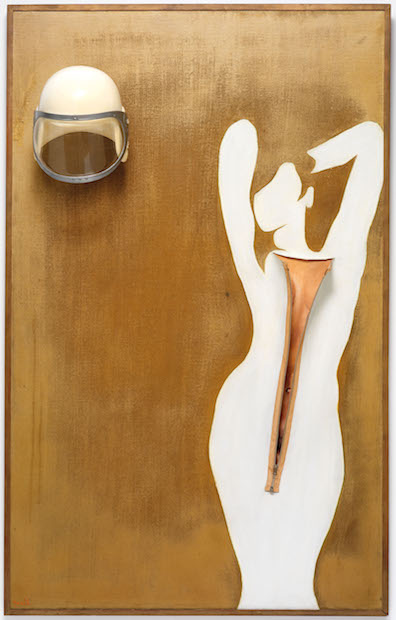 Where's the bang?
It is a shame that some of the inventive works are not seen in all their interactive glory. Wesley Duke Lee's Trapeze or a Confession (1966) for example, where ordinarily viewers can step into the space and be confronted with different aspects of humanity, is firmly shut away. Even Nicola L's Red Coat becomes a lifeless aesthetic object.
While it's wonderful to see Pop Art rolled out in a completely new light for one of the most important exhibitions of 2015; The World Goes Pop feels patchy as it tries to showcase so many revolutionary statements at once. Of course it's still bound to attract the numbers and this dynamic show is worth a visit to rediscover the roots of Pop Art and why it was so shocking before Warhol prints were ten a penny and Lichtenstein paintings covered railway stations.