As much about gardening as it is about art, this Royal Academy exhibition has us smitten

The Royal Academy’s triumphant exhibition Monet to Matisse: Painting the Modern Garden, explores the relationship between art and horticulture from the 1860s to the 1920s; through Impressionism, Post Impressionism and the Avant-Garde. We’re smitten.

In the 19th Century, well-heeled members of society stepped out of their stuffy parlours and into the fresh air. Gardening had become a pastime for the burgeoning bourgeoisie; in an age of increasing industrialisation, the middle-classes desired to construct their own private Arcadia, a place of birdsong and sunlight. Nurseries flourished, as did floral fairs and exhibitions. New species of flowers arrived from America and Asia; towering dahlias and chrysanthemums as big as dinner plates.

Along with these modern middle-class gardens came – of course – a great deal of art depicting them, a rich crop of which appears in this RA exhibition. To walk through these rooms is to encounter hundreds of different artistic experiments. Gardens became outdoor studios: places to explore brush-stroke, colour and form. Moving past these paintings, each scene draws you into its peculiar world; an effect we hope won't be ruined by the crowds that will come. 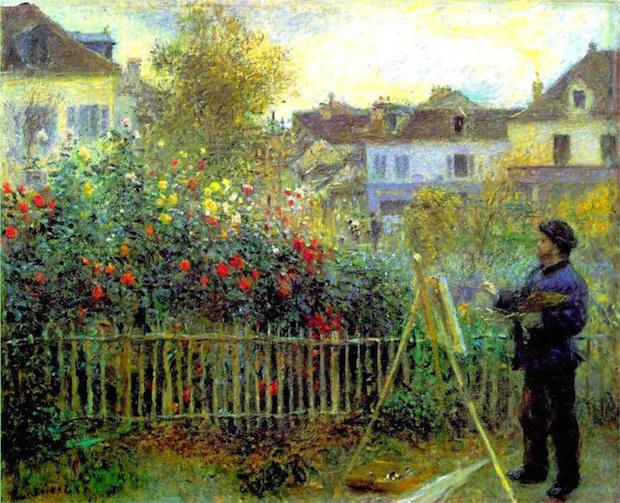 We have Cezanne’s murky Pond at the Jas de Bouffan, Manet’s gauzy Young Woman Among Flowers. Renoir’s Monet Painting in his Garden at Argenteuil (above) depicts his friend painting dahlias en plein air, as any good Impressionist should. Monet is shown rendering nature in paint whilst enjoying its bounty.

On to the Avant-Gardens. Who else could have painted Apple Tree in the Garden, with its curves and its deep blue, but Edvard Munch? Across the room Kandinsky’s startling Murnau Garden II sings in prismatic symphony. This was the artist’s first dive into abstraction; he is using colour in an emotive rather than a descriptive manner. Paul Klee’s flowerbeds are, funnily enough, patchworks of colour, while Gustav Klimt’s Cottage Garden draws the eye right to the top of the canvas, the same composition as of his women.

And then we come to Monet, King of the Garden, and of this exhibition – widely considered the greatest painter of nature ever to have lived. The French Impressionist was as much a gardener as artist. He built his own at Giverny for 15 years before he began painting it, draping it with chrysanthemums, irises and, of course, waterlilies.

Monet’s paintings of his own garden are unsurprisingly the highlight of this exhibition. From his first Giverny experiments in the 1890s to his Grands Decorations of 1914-26, the artist was occupied by this spot of land for over 30 years. The RA have gathered an excellent selection: in White Waterlilies 1899, we’re drawn from the gallery into the shimmering scene, the dark foliage behind the bridge pulling at us. The diverse textures surrounding the greenery appeal more to our sense of touch than sight. 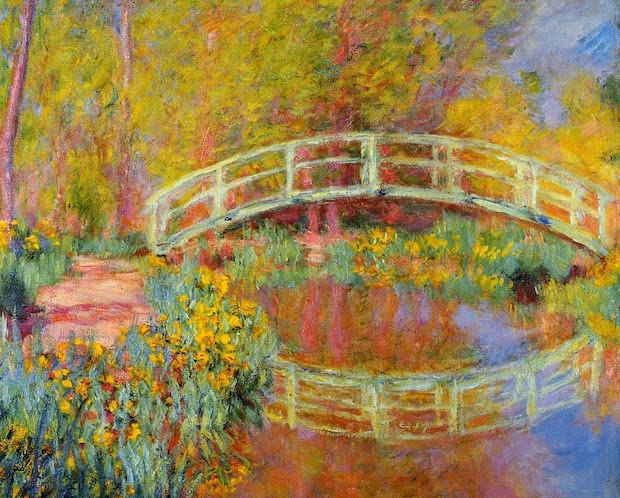 Japanese Bridge 1896 (above) is a sketchy tumult of Spring colour: the riverbank is pink, the tree-trunks and sky, lilac, the greens, at times, neon. The chaos of the palette is reigned in by the bridges’ identical reflection in the water, which lends the composition a sense of infinite wholeness.

The last two rooms in the gallery are reserved for Monet’s late paintings. What remarkable works they are. The beauty of these enormous canvases is enough to choke you up. We are just above the surface, almost in the water, taking part in the existence of these flowers and their half-lit blue and lilac worlds. There are no horizons, no riverbanks: we're exquisitely suspended, outside of time and place.

The artist made these works at a time of great sadness, both personal (his second wife had just died) and global (the First World War was raging throughout Europe). When Monet paints these lilies, he is not painting his garden. He reaches for something eternal and limitless. These are images in the language of human feeling that appeal not to the eye, but the heart.

The enormous Agapanthas triptych in the final room was given by the artist to the French nation at the signing of armistice: a monument to peace. Watching light dance across the dusky surface, it isn’t hard to see why.