'What will survive of us is love': we review the National Portrait Gallery's solo show dedicated to the late, great painter

But then, you see the painting's title. DH in Hollywood. And the scene assembles itself before your eyes. The blue smudges are the glittering surface of a pool. The green arches are palm leaves, the rectangles trunks. The orange pulses are the high heat of Los Angeles. Finally, that phallic pink oblong, capped with a streak of bright yellow, is – who else? – David Hockney, in his pool.

We know Hockney's poolside so well. But we're used to seeing it through his eyes: chilly and formal, with hard edges and a raised eyebrow. The scene before us pulsates – we are looking at its essence. It is not about what it looks like, it is about what it feels like. 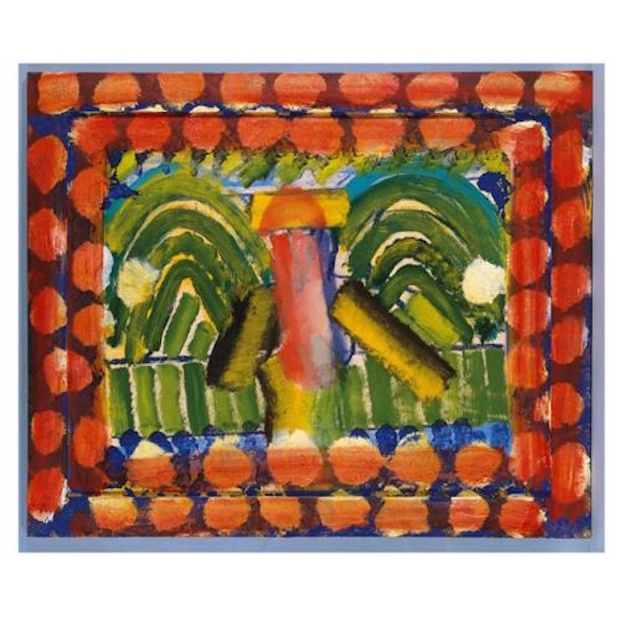 Opening just two weeks after the painter's death, the sorely-titled Howard Hodgkin: Absent Friends jettisons our idea of the painter we all knew as a purely abstract artist. More than any exhibition this year, the show is about people and place. The Turner Prize winner's seemingly non-representational works are emotional portraits.

His paintings, then, are not of his subjects. They are about his feelings for them: rich psychological works that plumb human emotion. These lavish streams of colour, wild shapes and gestural brush-strokes worship the world in which he lived. lt is easy to see why the poet Seamus Heaney once said that Hodgkin celebrates what poet Dylan Thomas called the ‘force that through the green fuse drives the flower' – the surge of life that runs through the world and connects us all.

Hodgkin made a name for himself in the 1960s and 70s. He represented Britain at the Venice Biennale in 1984, and in 1985 he won the Turner Prize. Over 50 years, Hodgkin painted prolifically, went in and out of fashion, and never quite matched the dizzying fame and fortune enjoyed by his friends Lucian Freud, Patrick Caulfield and David Hockney. Perhaps this is because Hodgkin refused to align himself with any artistic movement, perhaps this is because people saw his work as merely rollicking jets of colour.

But these canvases, together assembled, are synaesthetic documents of the people, places and animals that defined Hodgkin's life.

Without sounding too mawkish, you leave with Larkin's well-thumbed line rattling around your head.

'What will survive of us is love'.

A whisper about: London beauty news