Filmed with iPhones on All Hallows night in Greenwich Village, American Gothic is entrancing. This new short film records ghoulish party-goers enjoying the theatrical celebrations. Clowns, vampires and characters from the Wizard of Oz mingle, laugh and scream together. They drink, they enjoy, they forget. Only the lone ‘Donald Trump’, filmed loitering in the East Village, references the political turmoil simultaneously erupting outside the frame. American Gothic, like the rest of Parker's work, packs a hefty political punch.

The current exhibition of Parker’s work – on display at Frith Street’s Golden Square and London Square galleries – presents a series of new video installations exploring America, made at the time of the presidential election, alongside a number of other films and recent work.

Parker is perhaps best known for Cold Dark Matter: An Exploded View (1991), in which she blew a garden shed to smithereens. Just named as official artist for the general election, Parker is set to explode on to the world stage. The British Royal Academician and Turner Prize nominee converts the everyday in this exhibition into something extraordinary, abstract, beautiful. 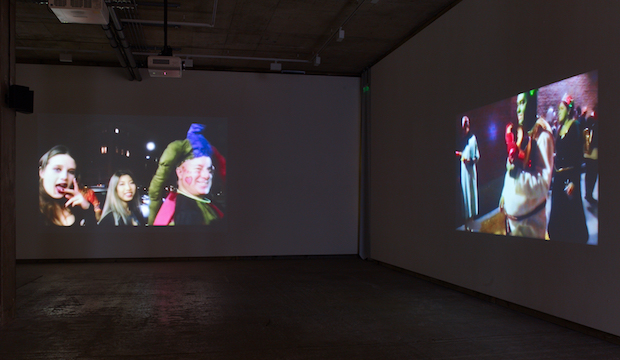 The two exhibited blackboards, drawn from Parker’s series News at Five, News at Ten, are covered in headlines scribbled by children aged between five and 10. Although too young to understand the significance of what they write – 'Bathtub Terror', 'Russia’s Meddling in US Election', 'Labour' – these headlines will profoundly shape their future. Not record-breakingly innovative, but a jarring juxtaposition nonetheless.

Once you’ve gleaned all you can from Golden Square – this may take five minutes or 50, depending on your dedication to understanding the particulars embedded in Parker’s work – head over to the Soho Square gallery for the suite of the exhibition. 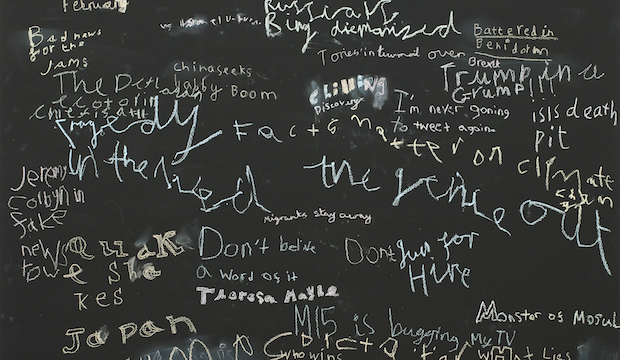 The Soho Square space is more intimate and far less pretentious. The whitewashed walls, concrete floors and warehouse-style ceilings of the Golden Square gallery are, here, replaced by 17th-century floorboards, a higgledy-piggledy interior and a black front door with a doorbell. So different in style, it is hard to believe these two spaces fall under the same umbrella.

In the back gallery, Parker’s Bullet Drawings – fabricated from melted bullets, drawn into lead wire and then sewn through paper in modernist formations – surround Sawn Up, Sawn Off Shotgun (2015). The confiscated gun, which has been cut up into pieces, is situated in a Perspex box in the centre of the room. A sinister beauty oozes from the walls. It’s a dark beauty that makes you feel decidedly uncomfortable. For what is beautiful in here is deadly out there. Again, Parker makes you stop, stare and think. 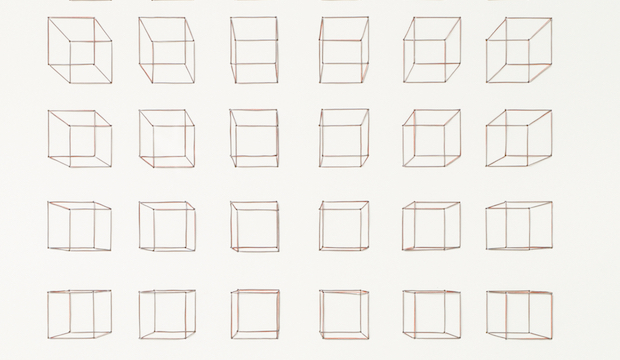 Parker’s video installations Made in Bethlehem (2012) and Machine (2015), are on constant loop downstairs. A filmic, rhythmic monotony, which reflects the repetitive choreography of life and ritual, dominates both reels. Made in Bethlehem records a simple but laborious fabrication process that is mesmerising if watched from beginning to end.

Muhammad Hussein Ba-our and his son are filmed weaving thousands of barbed crowns ahead of the influx of Easter pilgrims. Day in and day out they weave in preparation for this event. Dulled to the pain, they alleviate boredom by discussing politics. The old man hopes for a free Palestine with an airport, the young man for a cinema. A sobering visual that is as powerful as any of Parker’s more recent films.

Parker’s work is thought provoking, and it’s not easy. It is harsh, and requires deep concentration – and dedication, if you don’t want to be distracted by the buzz of the bars during the nine-minute walk from one gallery to the other. It’s thrilling, dark and violent – but is polemic, and at times confusing.

You will love this exhibition if you like a challenge, but will hate it if conceptual, political contemporary art is just a bit outside your comfort zone.