You're going to want to plan a trip to Oxford: Ashmolean museum stages a major Jeff Koons exhibition

On entering the exhibition we are met with a hypnotic piece from his 1985 Equilibrium series, a basketball suspended in distilled water, created with the help of Nobel Prize-winning physicist Richard Feynman. In the same room we encounter the Banality series, in which Koons takes kitsch imagery to a new, supersized level by recreating sculptures based on Hummel figurines, cute collectables popular in early 20th century Germany. Ushering in Banality (1988), which shows rosy-cheeked cherubs jovially leading along a portly swine, looks like something that you would find on your grandmother’s kitchen shelf, wedged between her silver Jubilee tea set and a framed photograph of you in school uniform. 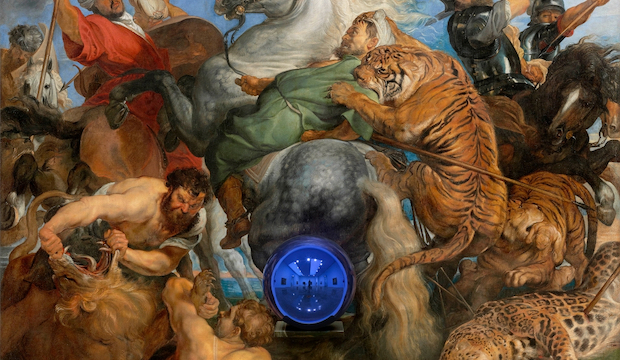 This is the type of art that draws intellectual value in repositioning the kitsch as high culture. From Duchamp’s readymades to Warhol’s prints, this type of iconoclasm is hardly new. But somehow, Koons does it more audaciously than anyone else.

In the central room we meet the imposing sculptures from his Antiquity series (2009-2015), including two of Koons’s polychromatic ballerinas, modelled after porcelain figurines, but blown up to a colossal scale. Their shellac surfaces are visually arresting and impeccably executed. Finally we come to The Gazing Ball series, where we are confronted with facsimiles of some of the greatest works in art history, almost identical to the originals, apart from the cobalt blue balls attached to each of them. It is a wonder that Koons went through the trouble of meticulously recreating the zoological pandemonium of Rubens' work in Gazing Ball (Rubens Tiger Hunt), (2015) with hi-tech methods and an army of assistants. He claims that this room seeks to embed contemporary practices and materials within the history of art, but perhaps he is just showing off, comparing himself to the greats, and challenging their position as such.

Love him or hate him, Koons’s ebullient works dazzle with their flamboyant frivolity, polished patinas and impressive scale. In a museum filled with many ancient treasures, it is immensely fun to see them make room for one of the most exuberant personalities in contemporary art.

An exhibition that merits a day trip from London.