10 CW readers are interested
Review: Edward Burne-Jones exhibition, Tate Britain 4 Review: Edward Burne-Jones exhibition, Tate Britain Lily Spicer
Edward Burne-Jones believed a picture should be ‘a beautiful romantic dream of something that never was, never can be – in a land no one can define or remember, only desire.’ His distinctive, fairy-tale canvases are populated with Arthurian knights, classical heroes and biblical angels. His career represented the swan-song of the Pre-Raphaelite Brotherhood, and he was the only member to attain international fame in his own lifetime, becoming the most influential British artist of the fin de siècle. In rapidly industrialising Victorian Britain, Burne-Jones’s idiosyncratic vision was one of pure, otherworldly escapism. 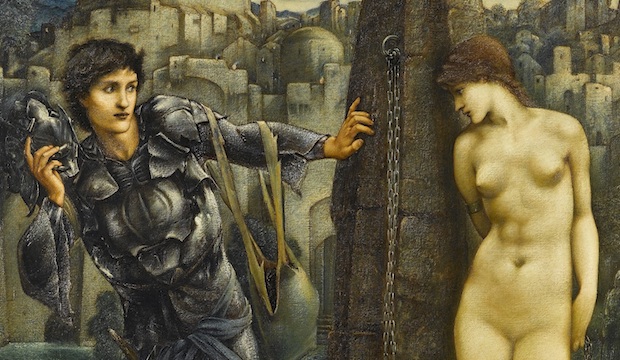 The Rock of Doom, 1885-8, oil on canvas, Staatsgalerie Stuttgart

This Autumn, Tate Britain plays host to the largest Burne-Jones retrospective for a generation. Preconceptions are instantly confirmed with plenty of familiar Pre-Raphaelite tropes – frieze-like canvases, coloured with steely blues and populated with chalky-skinned, angular-jawed maidens. But there was more to Burne-Jones. This major, long-overdue retrospective presents a fresh image of a multifaceted artist capable of fulfilling many roles at once. As suggested by the 150 works on display, Burne-Jones was colourist and draughtsman, Pre-Raphaelite and Symbolist, painter and designer.

Born ‘Ted Jones’, he abandoned his Oxford theology degree to become a church decorator, changed his name, and threw himself at the feet of the revolutionary Pre-Raphaelite Brotherhood. The exhibition takes a broadly chronological approach of his life and work, beginning with an examination of his early work. Here he is shown to have been a pre-Raphaelite in the truest sense, painstakingly reviving medieval painting techniques by using gesso and gold leaf. This is wonderfully illustrated by a three-part Annunciation and the Adoration of the Magi – a richly textured, luminescent painting worthy of a 14th century altarpiece, complete with dappled angel feathers and gleaming armour.

The highlight of this exhibition, though, is a room dedicated to the countless preparatory drawings he produced while holed up in his Fulham studio, including some exquisite studies of heads and hands. They prove that, despite lacking any formal training, Burne-Jones was a skilled draughtsman. The stylisation of his later work was therefore entirely deliberate, reflecting wider Victorian ideals of revivalism and romanticism. Alongside many drawings of graceful nudes clearly inspired by his hero Michelangelo, we learn that Burne-Jones also dabbled in the grotesque and the absurd, with doodled caricatures of friends revealing a more playful side to his character. 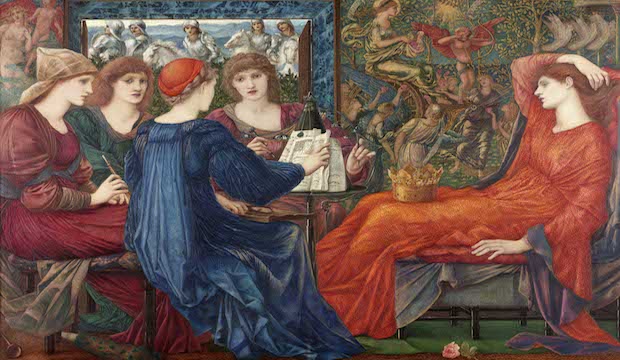 This exhibition also sees a dozen of Jones’s portraits displayed together for the first time. They reveal a radically different approach to contemporary society portraits – Jones’s elegant yet highly idealised depictions of women with piercing stares against stark backgrounds have an almost eerie quality. Like his counterparts John Everett Millais and Dante Gabriel Rossetti, Jones’ models were drawn from his intimate circle of friends; to gaze upon his portraits is to step into his world.

Romantics will be drawn to The Briar Rose, a dreamlike narrative cycle of the Sleeping Beauty fairy-tale, which occupies an entire room. Jones modelled the slumbering princess on his own daughter, Margaret, and filled the moody canvases with overgrown thorns and remarkably vivid drapery. Just standing before it makes you want to fall into a long, deep sleep. 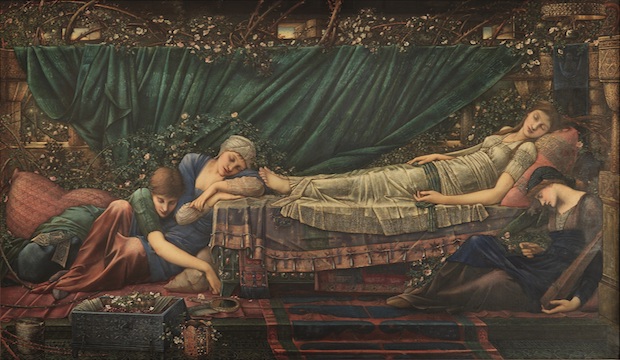 The Rose Bower, 1885-90, oil on canvas, the Farringdon Collection Trust

The show culminates with a celebration of Burne-Jones the decorative artist. The centrepiece is the elegant grand piano he designed and painted himself – and at which Andy Warhol was famously photographed in 1975. There are also vast tapestries he created alongside his lifelong friend William Morris, whose pioneering Arts & Crafts designs are currently everywhere thanks to a hugely popular collaboration with H&M. The pair met at Oxford and went on to revolutionise the decorative arts as a vehicle for social reform.

Burne-Jones's idiosyncratic works are fantastical, ethereal and decidedly Victorian. As such, they are an acquired taste, and at times a bit ridiculous. But if you are in need a dose of reverie – this is the exhibition for you. 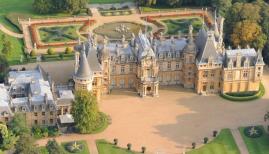