As the weather improves and the evenings become brighter, thoughts turn to outdoor pursuits and warmer days. Here are 10 paintings to help get you in the mood for spring 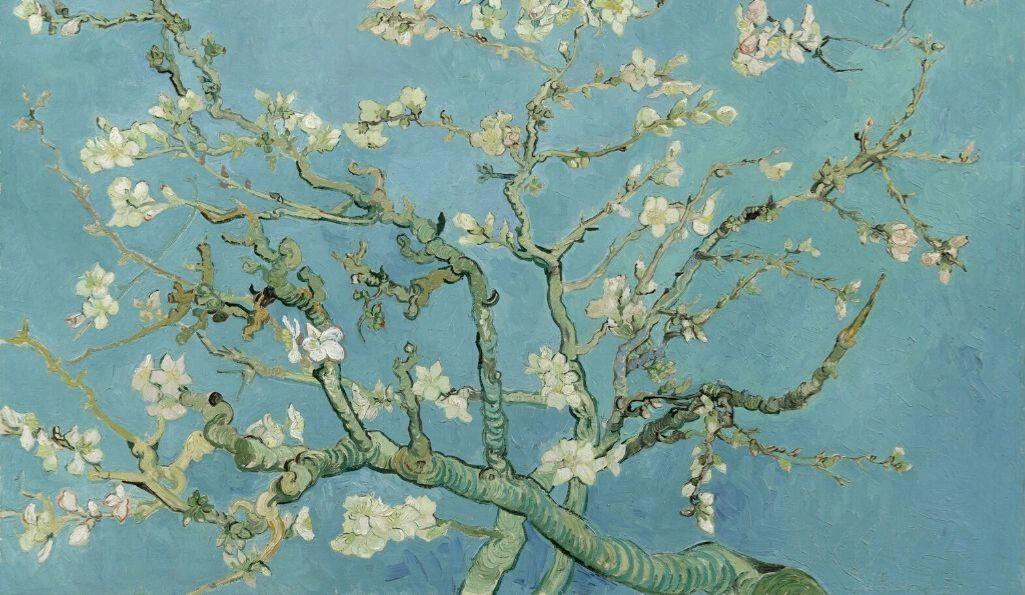 Vincent van Gogh. Orange Blossoms (1890) van Gogh Museum
Fling open those windows and dust off your vases; the weather is improving and the daffodils are out. Spring is the most colourful time of the year and has provided inspiration to artists for centuries. After all, who can resist the blossoms, birdsong and warmer weather? Here are some of the most evocative images to get you in the mood.
Woman at a Window, Caspar David Friedrich (1822) 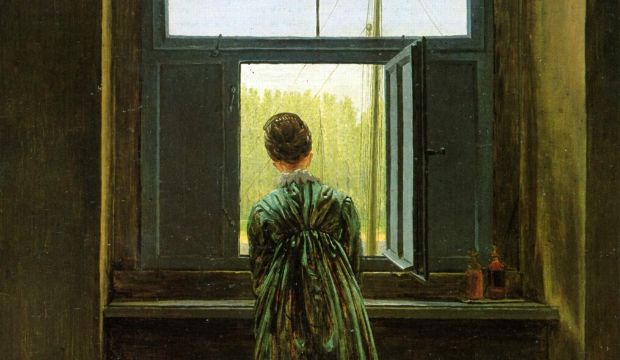 If there is one colour that brings spring to mind it has to be green. This painting, by the German Romantic painter, Caspar David Friedrich, is a veritable study of verdant hues, from the woman's dress and the pine-green shutters to the poplar trees growing across the bay. This is the artist's wife, Caroline, looking down at the boats below. The scene is open to interpretation, but we can all relate to the need for fresh air after a winter of being confined indoors. 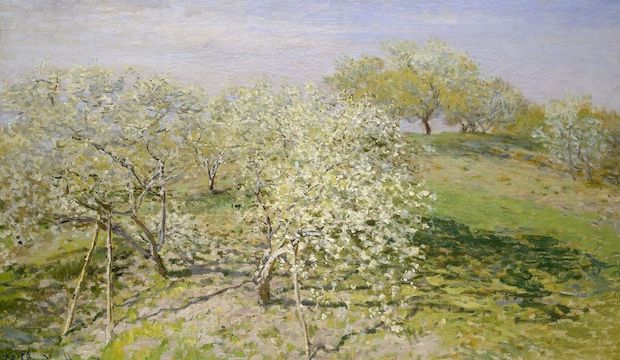 Better weather brings with it blossoms and the promise of fruit. Monet painted this orchard scene near his home in Argenteuil and it perfectly evokes a warm spring day and the hope of summer. 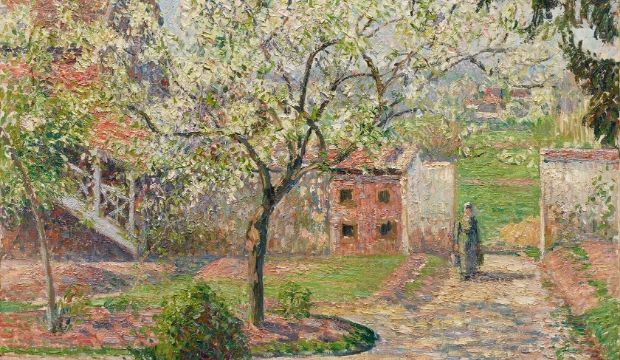 This painting by Pissarro shows the garden of his home in Éragny, where he moved with his family in 1884. Pissarro loved to paint ordinary people going about their lives without pomp or circumstance. He was a pioneer of Impressionism, a style of painting perfectly suited to dappled light and springtime blooms. 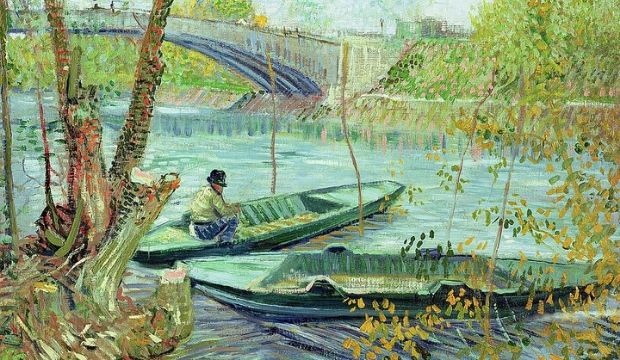 What could be better than messing about in boats in the springtime? Here, van Gogh has captured a river scene with bright hues and his characteristic energy. 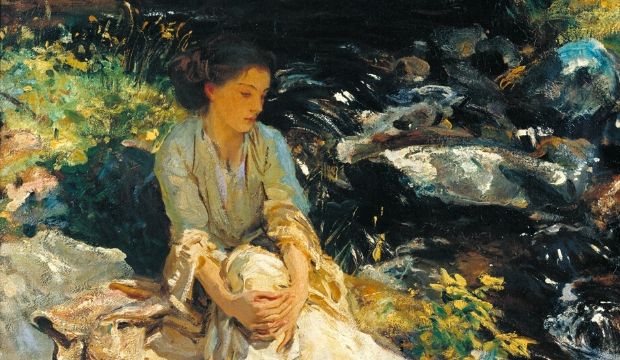 This is Sargent's niece Rose-Marie Ormond, who was 15 when this canvas was painted in northern Italy. Rose-Marie was Sargent's travelling companion and one of his favourite subjects. This images is so loosely painted, it could almost be a watercolour. 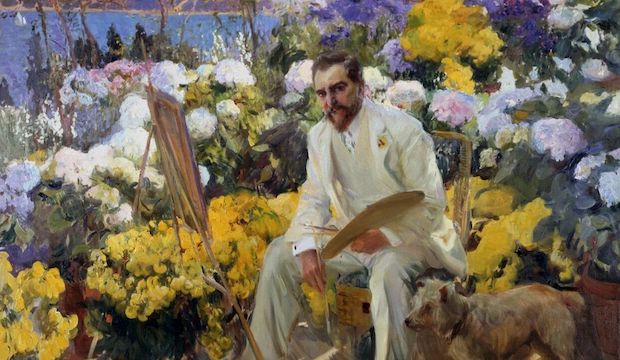 Here is Louis Comfort Tiffany, glass designer and first design director of Tiffany & Co., in his glorious garden. This is one of Joaquin Sorolla's early commissions and it helped launch his career in the US. Sorolla had a real knack for capturing light and here the glorious yellows and purples sing of springtime. 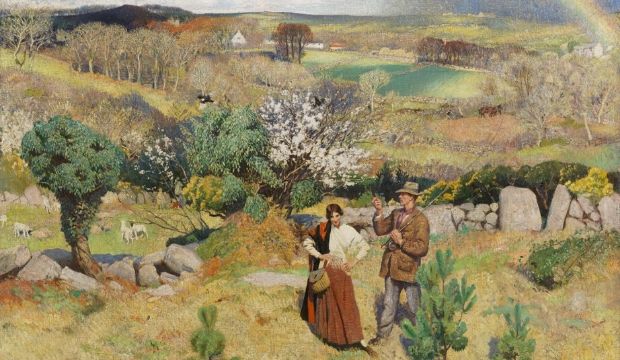 This is a detail of Dame Laura Knight's painting of Lamorna Valley in Cornwall. A fisherman examines the fly at the end of his fishing line, while the woman next to him holds his bag. This joyful scene, which includes lambs, a horse ploughing fields and children playing in the distance, was made during the First World War, at a time when painting outdoors was illegal. Knight said of making this image: 'I had to lie on my stomach under a gorse or any other convenient bush, in dread of being taken off to prison, to make a line or two in a sketch book.' 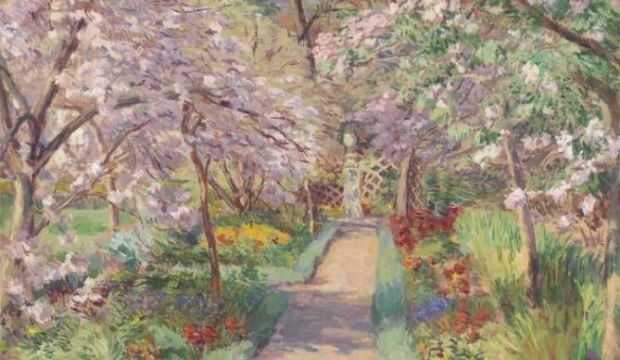 This carefully tended garden is part of the estate at Charleston in East Sussex, former home of Vanessa Bell and Duncan Grant, two prominent members of the Bloomsbury group, which also included Virginia Woolf and the art critic Roger Fry. This painting depicts a blossom-filled idyll during the Second World War. Grant was a conscientious objector, and, at time when most gardens were being turned into allotments in line with the governments call to 'dig for victory,' this flowery haven was a rare luxury. 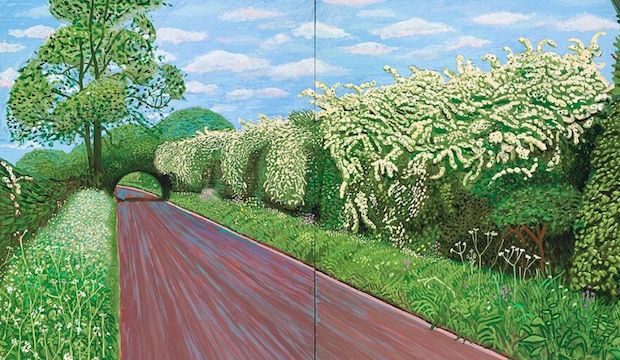 Hockney has painted all the seasons in his native Yorkshire. Just as Monet was fascinated with shifting colours and light throughout the year, Hockney (who is a fan of the Impressionist painter), braved all weathers to capture the landscapes around his home. Here, we see a country lane near the village of Rudston, with cow parsley and hawthorn hedges in full bloom. 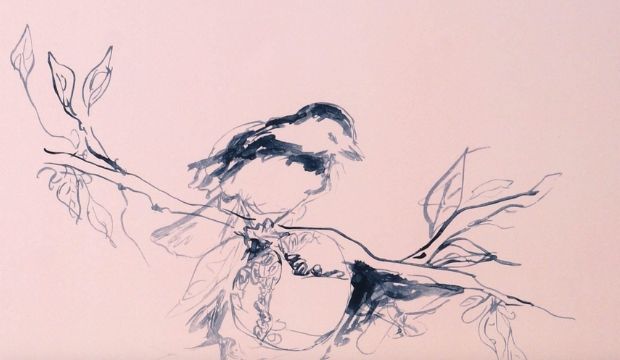 Tracey Emin made this image to commemorate Team GB’s participation in the first European Games in Baku, Azerbaijan, but birds are a recurring motif in her work. Emin loves the fragile nature of our feathered friends and has called them 'angels of this earth'. They are also the perfect creatures to herald the spring.