From Demna Gvasalia's powerful Balenciaga show to the demise of Russian artists and oligarch collectors, the invasion of Ukraine challenges the art world 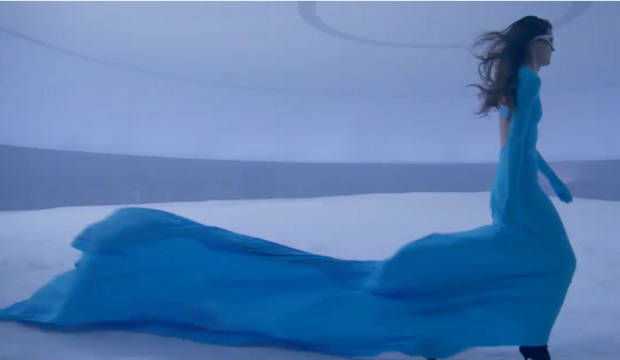 Balenciaga AW22 - In support of Ukraine
From Demna Gvasalia's powerful Balenciaga show to the demise of artists and oligarch collectors in Europe, along with the multiple initiatives kick-started to help the humanitarian tragedy, the art and fashion world is grappling with the reality of the war in Ukraine. But the situation also raises the important question of the role of culture and the arts in times of crisis.

When the war started in Ukraine on 24 February, Fashion Weeks were in full swing across a Europe just emerging from Covid.
Designers, fashion journalists and influencers suddenly found themselves in the spotlight and apologising for the frivolity of their activities amid a humanitarian crisis unfolding nearby.

Beyond expected messages condemning the war and invitations to donate to Ukraine, the fashion industry at first carried on as usual as if powerless to do more, uncomfortable with addressing the horrors of the war. Giorgio Armani’s decision to switch off the music to hold his Milan show in silence was the first official acknowledgement of the situation.

But then came Demna Gvasalia, Balenciaga’s creative director, who fled Georgia as a child when his country was in a civil war. As reports broke of more than 1.5 million refugees reaching Europe from Ukraine, Gvasalia greeted his guests with Ukrainian flag T-shirts and invited them to watch a Balenciaga show where shivering models, clutching bin bags seemingly filled with belongings, battled against a blistering wind on a snowy catwalk: few guests left the show without tears in their eyes.

‘In times like this,' Gvasalia wrote in a preamble, ‘fashion loses its relevance and its actual right to exhibit. Fashion Week feels like some kind of an absurdity. I thought for a moment about cancelling the show that I and my team worked hard on and were all looking forward to. But then I realised that cancelling this show would mean giving in, surrendering to the evil that has already hurt me so much almost 30 years ago.' Adding to this in a later interview, he said: 'We as a brand have to do something. We cannot take weapons and go fight there but we can use our voices.'

Balenciaga’s powerful message raised questions about the role and responsibility of the art and fashion world in a European war.

The first response from fashion brands and the cultural spheres was to cut all ties with Russia, with Russian artists and companies beginning to feel the repercussions of decisions taken by Vladimir Putin, either because of their political support for the Russian autocrat or because of their morally unsustainable position.

In the classical music world, conductor Valery Gergiev and the opera singer Anna Netrebko have had performances cancelled and positions withdrawn over their support for the Russian regime.

The Royal Opera House cancelled the traditional summer season of the Bolshoi ballet. Meanwhile, The Russian Pavilion withdrew from the Venice Biennale, their Russian artists and curator stating that 'there is no place for art when civilians are dying under the fire of missiles, when citizens of Ukraine are hiding in shelters, when Russian protesters are getting silenced’.

Netflix suspended its streaming service in Russia, while Warner Bros, Disney and Sony halted the release of films in Russian cinemas. Back in the fashion world, Hermès, LVMH and Chanel closed their stores.

But severing cultural ties with Putin’s Russia also implies returning artefacts on loan. Earlier this week, the Hermitage Museum in St Petersburg asked for pieces currently on display at an exhibition in Milan to be returned by the end of March. In London, the Victoria and Albert Museum which is currently showing an exhibition about the Russian imperial jeweller Peter Carl Fabergé, is displaying artworks on loan from museums in Moscow and St Petersburg. The V&A spokesperson said the museum is addressing ‘a rapidly evolving situation’.

Lavish donations from rich Russians to British art institutions are also in the spotlight. Petr Aven, a banker close to Vladimir Putin, currently a donor and a trustee of the Royal Academy of Art in London, is to step down from his position and the RA will be returning his recent donation for the Francis Bacon show.

Beyond severing ties with Putin’s Russia, cultural institutions have been focusing on supporting Ukraine, its artists and cultural heritage. Nearly 50 European cultural networks – representing thousands of theatres, arts festivals and venues – have pledged to receive and host Ukrainian artists, and to stage performances and events in a show of support for the country. A petition has also been signed by more than 600 individuals, including the National Theatre's artistic director Rufus Norris.

'We are extremely concerned about the impact of the invasion on civil society. Over the past decade we have developed deep ties with counterpart organisations in Ukraine – supporting ongoing dialogue and artistic exchange, a thriving democracy and long-term collaboration with future generations through flagship civil society initiatives, such as the EU’s Eastern Partnership,' the letter says, declaring that international collaboration 'must be supported at all costs'.

'Our organisations are ready to receive and host artists, to stage performances, to organise events, to inform and facilitate access to resources and to advocate for a peaceful solution,' it adds.

In an art and fashion world that used to know no boundaries, decisions to cut all ties with Russia and voice support for Ukraine have been swift.

Inexorably, culture is becoming a key component in the war against Putin’s Russia. Earlier this week, culture secretary Nadine Dorries told parliament that 'culture and sport can be equally as effective as economic sanctions if used in the right way'. She added: 'In the last week I’ve been working to mobilise the full might of the UK’s soft power against the Russian state, and applying pressure – both publicly and privately – across the sectors, to use every lever at their disposal to entrench Putin’s position as an international pariah. Culture is the third front in the Ukrainian war.' Her statement echoes Gvasalia's language and leaves no room for ambivalence.

But beyond the responsibility of artists to hold the moral grounds, we need culture more than ever to help us make sense of it all.

#Ukrainesupportpledge on Instagram: Buy artwork with a pledge to donation

Choose Love has launched the Ukraine Crisis Fundraiser, with donations going to supporting projects (which meet Choose Love’s criteria) that are providing vital aid and services to those still in, and fleeing, the country. Find out more here.

The Beauty Banks is currently supporting several UK-based charities that are collecting essentials for people who have left their homes for neighbouring countries. More information will be shared in the coming days here.

The Toiletries Amnesty is providing large-scale donations of essential hygiene products to refugees in Ukraine, Poland, Romania and Moldova. They have also launched a fundraiser to cover the cost of storage for the donations and transport costs. Find out more here.

The Disasters Emergency Committee has launched the Ukraine Humanitarian Appeal for families who have left their homes with only the items they were able to carry. Find out how you can help here.

The Red Cross’s Ukraine Crisis Appeal uses donations to help people who have been affected to get food, water, first aid, shelter, medicines and warm clothes. Find out more here.