Luther series 5 is back. We met with Idris Elba and Ruth Wilson to find out more about the surprises in store for series 5 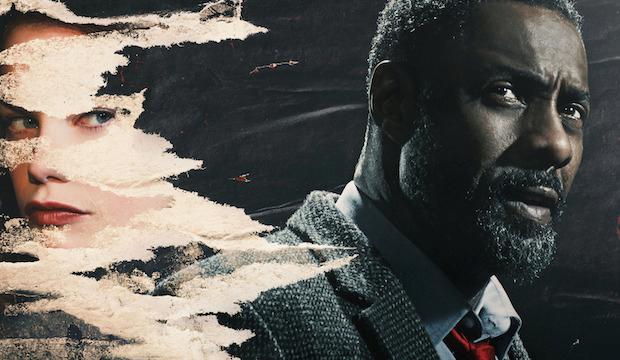 Ruth Wilson and Idris Elba: Luther series 5
Surely, there’s not another BBC detective series with the anticipation of Luther? This dark, gritty detective series is like film noir and horror cinema having a cordial dinner together. Culture Whisper attended an early screening of series 5 – appropriately located at the Courthouse Hotel in Shoreditch, right next door to a real courthouse.

The queue going in was guided with metal fences and police tape, banners stating THIS WILL HURT. Inside was a bar area bathed in red, serving red wine in glasses like Dracula would drink from. And the cinema itself was buried four floors underground like there’s no escape.

Ruth Wilson: I’ve been busy having some affairs… [referring to her recent show Mrs Wilson]


Alice is coming back. In what form is she coming back? How difficult has it been?

Wilson: Oh, impossible. Also, the Daily Mail got hold of it really early so it was a nightmare. That’s why I had to keep acting mysterious about whether I was coming back or not. And every interview I do, everyone asks. For three years. People love her, so I was like we have to bring her back and do it properly. 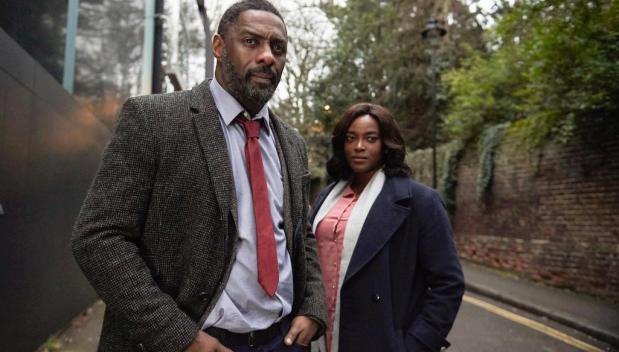 Was it quite an easy decision for you to make?

Idris, was it easy for you?

Elba: It’s one of those shows that wouldn’t work if we did it year in, year out. It’s one of those shows that needs to be made into bite sizes. And I think for Neil Cross [writer] and the producers and my sanity, I couldn’t do this all the time. The writing takes a while. Just getting the collaborators in terms of all the ingredients together in the right time, in the right space has taken a bit of construction. I think we like it that way.

Wunmi [Mosaku] and Hermione [Norris], you both are an amazing addition to the cast.

Norris: Four episodes, complete with beautifully crafted, cleanly defined characters and such incredible narrative. The threads, the storylines that run through… He doesn’t pull any punches. For me, it was just a huge privilege to work with him. Just an amazing script.

Mosaku: It’s a side of me I’ve never really shown on screen before. I feel like [D.S. Halliday] is in her own little world, in a way. A sugar cube in a spicy drama. 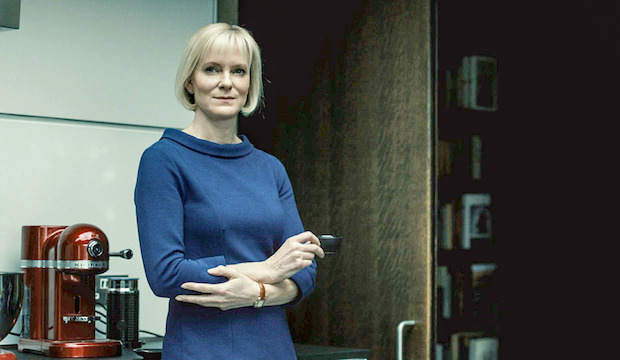 Is there gonna be a battle now because Luther’s probably Batman, now he’s got two Robins?

Michael Smiley: Can I just say, this is one of the most attractive audiences I’ve seen. Youse are fucking gorgeous. I’m thinking I’ll just grease myself up and jump in the middle.

Elba: I told you he was the Joker.

How are we going to see this story unfold? We’ve got the first episode where it’s concentrated on one killer. As we go forward, is the whole 4-part series going to be around that one person?

Elba: True to Luther, it just gets more complex. It’s never straightforward, and this season is extremely complex. Jamie Payne, our director, was overly aware that that’s the way Luther is. You unfold it and unfold it and unfold it. And even though in this particular season there is one antagonist, one murderer, so many things fall out of that. Alice shows up, and she isn’t here to give me Christmas cards. 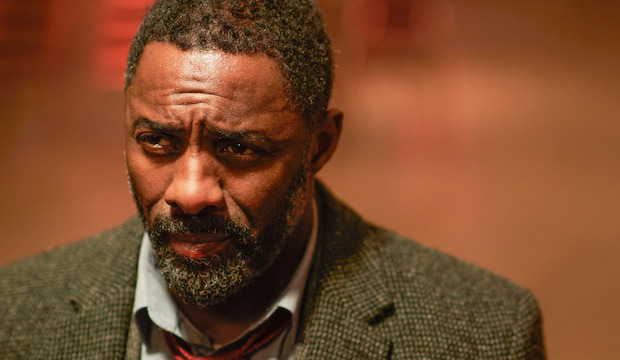 Is there going to be decisions for you all to make of whether you stick to the rules?

Wilson: [Alice] is always off the rails. I don’t stick to any rules. And she’s always trying to pull Luther to the dark side – it works quite frequently. But she’s vulnerable in this. She needs his help.

What about Benny, his right hand man?

Smiley: Benny starts a gogo dancing course. No, Benny goes on a bit of a journey. He gets out from behind the desk, so you get to see his lovely legs. I think it’s episode 3 or 4 where you can see him in really lovely lederhosen. If you see it, put it up on Instagram. The first person to see it gets a special prize… I hope that answers your question. 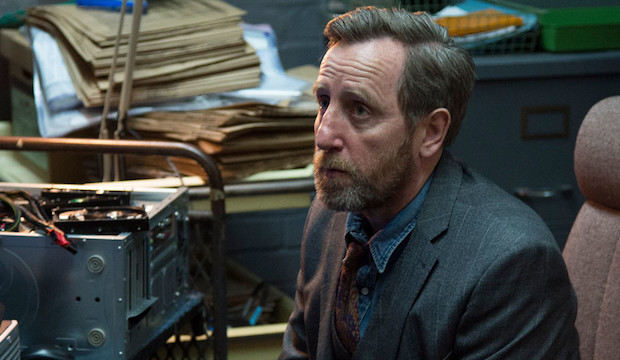 Filming Luther is quite a struggle. The topics surrounding it are murder and death. Coming into that – did you experience the same sort of feeling, that it’s quite tough?

Norris: Sometimes when things are particularly dark, it can be quite funny actually. You laugh more. It’s a tough shoot because it’s in winter, night shoots. I was excited to be in my hometown – I thought ‘oh great, I’m gonna be in London, it’s gonna be easy’. And then it can take an hour to get on location. Long, long days. Bleak storylines. It was really… cold.

Elba: That house, right next to a real graveyard.

Norris: You do really get into the vibe. You inhabit that whole worldview.

Elba: I tell you what was funny, but not funny. You know that scene where Hermione’s in the car park and spits at me? That was real spit. Hermione’s such a good actor, she really spat. And the take of me going… ‘what?’. I was waiting for somebody to say ‘CUT!’, but no one did. I stood there frozen. It’s a hard show to film because it’s crammed. All of those details written by Neil… that makes for a very gruelling schedule. We’re shooting in winter, so the daylight hours are shorter. We’re constantly pushing and pushing. When I first started Luther, I sat down with a murder detective out of Lewisham. We spoke about what is the toll that murder detectives take. Essentially, [it’s] the nature of absorbing all that energy, walking into that room and being the first person to examine a death. All of that stuff, we’re recreating it with a much [more] visceral crime. For us, as filmmakers, it is hard work. 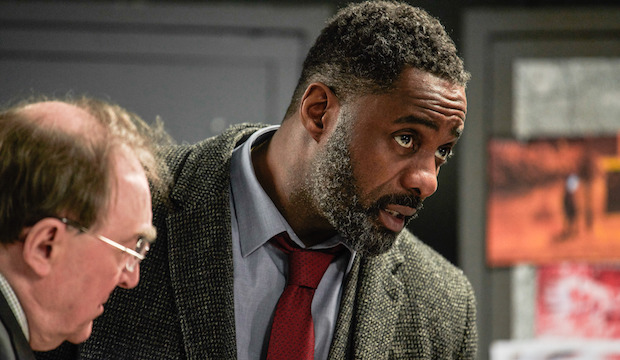 Smiley: In my career, I’ve done quite a lot of dark films and dark programmes and stuff. Off-camera, you try to find the comedy in it. It can be freezing cold and you can’t be miserable, you have to have a bit of a laugh and get on with each other. It is hard because there’s something about Luther that’s constantly in the dark. If it’s not raining, they’ll make it rain.

Ruth, did you think you were coming back one day?

Wilson: I watched it and obviously I’m like, ‘she’s not dead, she’s never dead’. I was keen to come back. Idris and I have been working on this for eight years. I feel more like a naughty child, the character becomes more and more like a little kid. It’s really fun to do. Of course, as soon as I got the call from Neil and the BBC and Idris, I was like ‘yeah, I’m coming back’.

Is it your ambition to make a movie version?

Elba: Yeah, it’s no news that we’re advancing on getting a movie version. Neil is beavering away, writing this thing. I think the remit for the film is scale. Luther has all the ingredients to echo those classic films of the ’90s like Se7en and Along Came A Spider. I think what we’d like to do is try and use that blueprint to create Luther: the Film. It’ll be more murder. More…

Elba: More Volvos. More frowning Luther. But essentially we want to take it to a much bigger audience and scale. And perhaps international as well.

Smiley: You should see his high kick as well. 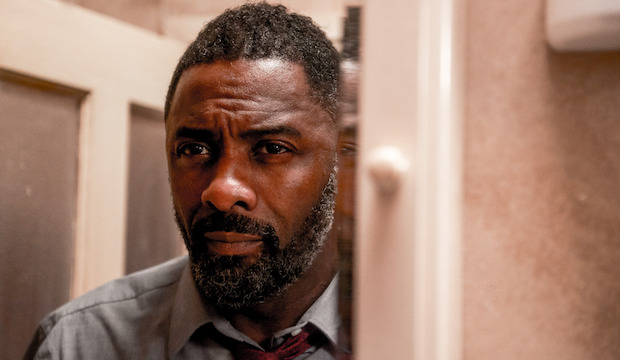 'it's no news that we're advancing on getting a movie version'

What were the physical demands of the show?

Smiley: I had to drop a couple of pounds and just get ripped. It’s really early mornings for me. You just gotta kind of go with it. We shot at the start of the year, it was January/February. The snow…

Smiley: Fog, snow. And then you’d turn up at Finsbury Park at dawn with the snow. But once you go, you go. I’d hate to be doing it in the summer – I don’t think Luther’s a summer thing…

Elba: It’s funny… when we shot that, I’d just had knee surgery about four months before. I had a replaced ACL. And I’m limping, I can see it. I thought I’d try and make it a Luther Walk. I got away with it. I wasn’t doing too much running, that was the order.

At this point in the Q&A, Ruth Wilson has to leave. It’s coming up to 9pm and the final episode of Mrs Wilson is about to air.

Elba: I haven’t seen the show, is it any good? 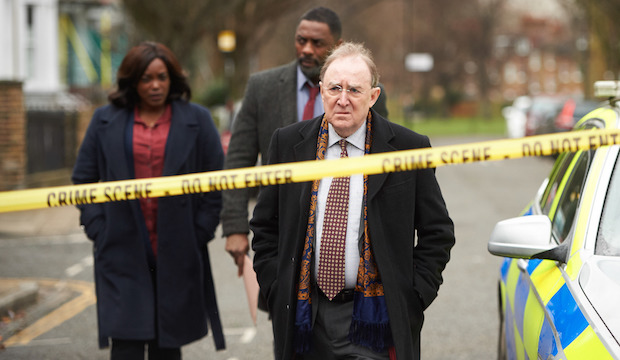 London seems to be a huge character in Luther. Where else do you think this could actually work and where would you guys like to take it?

Elba: Jamaica! The truth is, if we were to take it to other cities, it would have to be a city. The reason a city works is because there’s lots of shadows. I think cities that have that sort of Gotham-esque vibe. That mainly is Europe, I think. I can imagine transferring quite easily to Europe in some scenes. Who knows? Wherever there’s crime, Luther will go.

There’s another generation of cop coming up behind Luther. Is that an element of the story?

Elba: Not specifically. I don’t think on purpose. I think Luther’s always had, [to Mosaku] sorry, a sidekick. There’s always a theme of a celebrated cop, that cop that comes to join Luther – hasn’t quite tread the boards like Luther has. That is something that Neil is quite fixated on, this sort of old-school detective and then the new generation, the newer style of detective with more ethics. For Luther, there’s always a dilemma. What does he tell? What does he encourage?

Smiley: There’s something quite analogue about Luther as well. The Benny character has always been a digital type. Luther was kicking down doors.

Elba: But the Volvo is a Hybrid, just letting you know…

Mosaku: I’ve been there to make sure these two [indicates Elba and Smiley] behave, both on-screen and off-screen. [Halliday’s] really bright. She comes up with a lot of different ideas and hypotheses. I think she’s the brain. 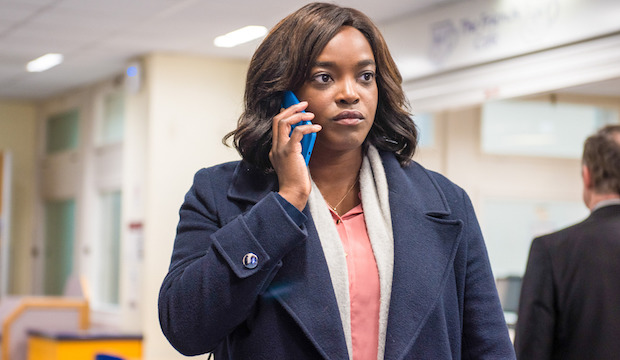 'I think she's the brain', says Wunmi Mosaku of her character DS Halliday

Are we gonna see her come out of her skin a lot more?

Mosaku: She definitely speaks up. [Luther’s] the boss and she wants to learn, but she wants to stick to the rules. They’re a bit chalk and cheese. Maybe cheese and chutney?

Do you have any irrational fears yourself?

Mosaku: Well, I’m never getting on a night bus again…

Elba: No, if I’m honest. I try not to watch the show… It’s very dark! It’s not the type of thing I like to watch. I’ve got my son, and we like to watch Shrek...