Game of Thrones season 7: spoilers have been well guarded this season, so here are the storylines we're really hoping for 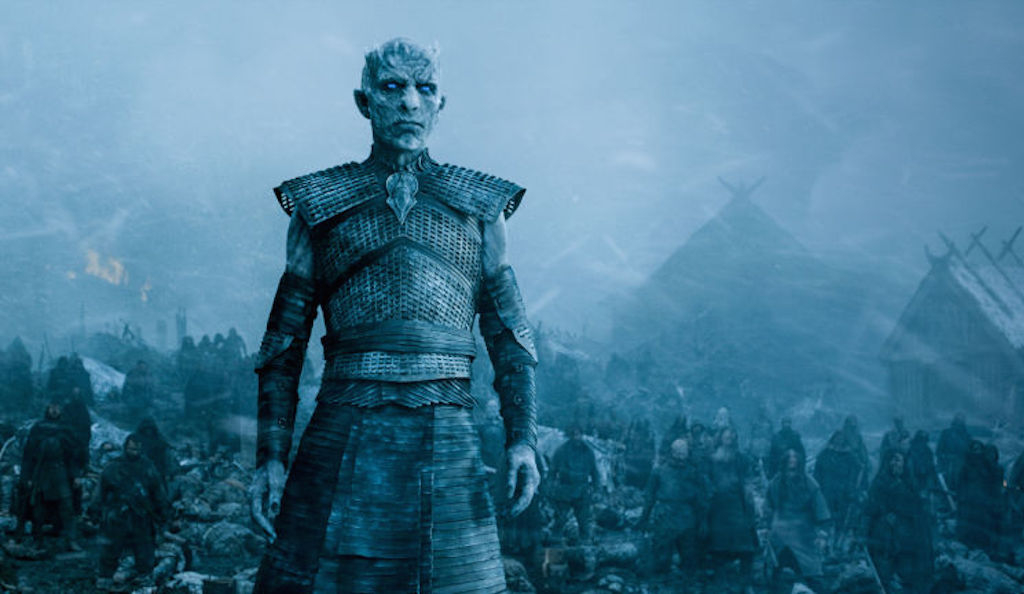 Game of Thrones season 7
Eager Game of Thrones fans, unable to wait until Sunday to discover what happens next, have resorted to imagining season seven spoilers. Have a quick browse on the internet, and you'll find plenty of enthusiastic threads that go something like this: ‘the actor who plays Gendry was seen in the airport! Gendry is for sure returning. Spoiler alert everyone!’

TRY CULTURE WHISPER
Receive free tickets & insider tips to unlock the best of London — direct to your inbox
But in reality, and for once, no one outside of the GoT production team has any idea what’s going to happen next. Fans of George RR Martin’s fantasy novel series have been waiting — in vain – for six years for a follow-up to the last book in the series A Dance with Dragons.This year, that smug mate of yours, who has diligently read all the novels, is as clueless about what's going to happen as you are. The sucker.

Plenty of false stories have abounded. In an effort to confuse us all, the cast were even made to film fake scenes, which no one would ever use.

In answer to the question of whether Jon Snow and Daenerys Targaryan had a scene together, Kit Harington told American show-host Jimmy Kimmel that, ‘we did fake some scenes. We put together people in situations where we knew the paparazzi were around, as they’d take photos and that would get on the internet to fake scenes so people would think they were real.’

Fans jumped when costume designer Michele Clapton’s accidentally said that Jon Snow kept his cape on ‘when he want to see Cersei'. 'Cersei and Jon Snow have a scene together! Spoiler', screamed the internet. But, who knows, those two could have been getting together in a fake scene. To paraphrase a famous GoT one-liner: we know nothing, Jon Snow.

And so, after all that, and the many months – nearly a year, actually – of speculative conjecture relying on things such as Emilia Clarke's outfit whilst filming a CGI dragon scene, here’s what we predict, and hope for, in season seven of Game of Thrones:
The great war, is here. Battle stations everyone! 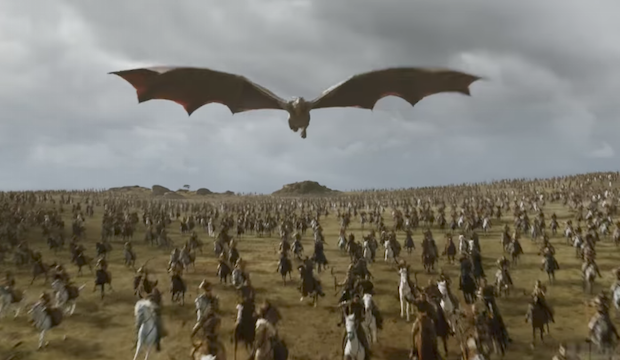 We know from the look of the trailer, which includes Jon Snow's helpful little line: 'the Great War is here', that we're finally going to get to see some battle scenes between the different fractions all after the Iron Throne.

Epic fight scenes is something Game of Thrones does really well – as exampled in last season's Battle of the Bastards or season two's Blackwater. This season, we're being treated to longer episode lengths across fewer instalments (seven rather than the usual ten), which means we're expecting the war scenes to be vast, and cinematic enough to double as mini-movies.

So, who is going to fight who? Well, at the end of the last season, Cersei Lannister (played by Lena Headey) become ruler of Westeros after burning most of her enemies alive with wildfire. Iron Throne contender and Mother of Dragons Daenerys Targaryan (Emilia Clarke) was seen sailing towards King's Landing, and Jon Snow (Kit Harington) was proclaimed King of the North. So, although we don't know for sure that Jon Snow and his protective cape will actually stand before Cersei Lannister, we're pretty sure these titans of the series are going to meet on the battlefield.

Somewhere in the mix, the trailer tells us, there's Jaime Lannister (Nikolaj Coster-Waldau) (and his white horse) rushing over a landscape filled with fire – dragon fire possibly – so we're guessing he gets involved in that too.
Speaking of Jaime and Cersei... is there a dramatic death on the cards? 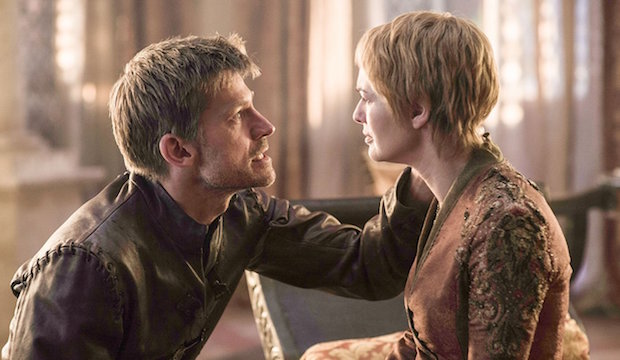 Cersei is more dangerous, more angry and more powerful than she's ever been before. Not only is she ruler of Westeros, she's got less to lose, as her wicked plot accidentally led to the suicide of her last remaining child Tommen.

Both the show and George RR Martin's books have speculated that Jaime might himself one day kill Cersei, despite being in love with her, and being her sibling, and all that.

The trailer shows Cersei looking miserable and brooding. Could her downfall be imminent? Perhaps, in that clip of Jaime riding valiantly through a landscape of fire, he isn't coming to her rescue after all, but quite the opposite...
Actually... let Cersei fall at the hands of Tyrion 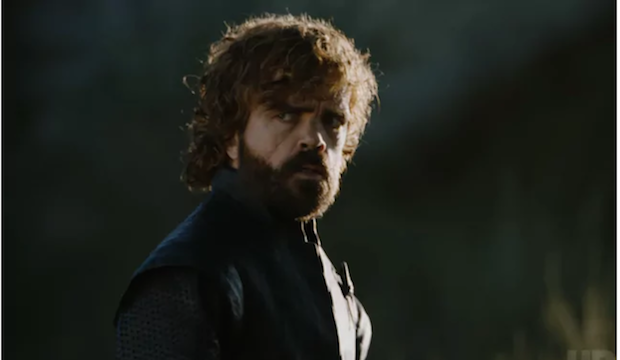 If a big war between Cersei and Daenerys is really on the cards, we can't wait to see where their brother Tyrion Lannister (Peter Drinklage) will be in all of this. Having run away from his family home of King's Landing many moons ago, Tyrion is now firmly allied with the Lannister enemy Daenerys Targaryan and her dragons.

Tyrion has always been a more loveable character than his now powerful sister. The time has come to show Cersei that, after years of abuse, he's the greatest Lannister of all. He would, no doubt, like nothing more than to exact some revenge on his sister Cersei. He's in the business of murdering family members after all, having successfully cut down his father, Tywin Lannister. That said, we're not sure how The Imp will marry his hatred for Cersei with the brotherly fondness he clearly has for Jaime.

We think Jaime and Tyrion will join forces against Cersei. With a bit of luck Bronn, Tyrion's old sellsword friend, will join the gang – seeing as how he's mates with Jaime these days – and fight against their wicked sister.
We want plenty of human nasty-ness alongside all those epic battle scenes

On balance, we believe Ramsay Bolton (Iwan Rheon) is one of the nastiest GoT characters ever. Now that he's gone the same way as the other deliciously unpleasant character Joffrey Lannister, we've been worrying that there'll be an absence of exquisite human nasty-ness.

Fortunately, in an interview with Empire Magazine, Euron actor Pilou Asbæk said that the show's most bloodthirsty fans won't be feeling a lack of Ramsay Bolton in their lives: 'The psychos I’ve encountered have so many different sides to them. So each scene I’ve done with Euron, I pick a new thing I wanna show. ‘This scene I want to be charming.’ ‘This scene I wanna be a molester.’ ‘This scene I wanna kill someone,'' he said. 'After this season, Ramsay’s gonna look like a little kid.'

We're very pleased to hear it's not just going to be vast battle scenes this season. Game of Thrones wouldn't be Game of Thrones without some exquisite human cruelty. So, we're looking forward to seeing someone replace Bolton as the most revolting person in the series.
A Stark reunion please! 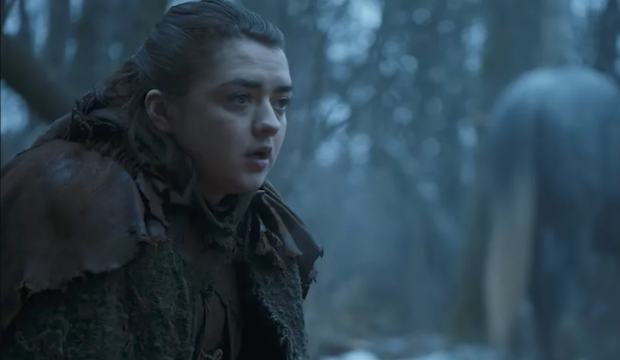 War is imminent, the White Walkers are on the move, Euron's a monster, everything is dark, horrible and twisty. So, naturally we're desperate for some levity and love. With a bit of luck, season seven might be the season the Starks finally get to see one another again.

Bran Stark (Isaac Hempstead Wright) can be seen at the Wall with Meera Reed (Ellie Kendrick) in the latest trailer, and then possibly in Winterfell. This means, at long last, perhaps he will see his sister Sansa (Sophie Turner) and even Jon, who we now know is technically his cousin. On top of which, there are those in cyber-space who believe Arya (Maisie Williams) is also heading North too.

There's an image doing the rounds online of Arya Stark in heavy, warm clothes and in front of what could be white-cold wall and there are those in cyberspace who believe that therefore she, too, is has returned to the Stark home. We'd love to see this. Give us something cheering and lovely before the world falls apart, we beg of you.